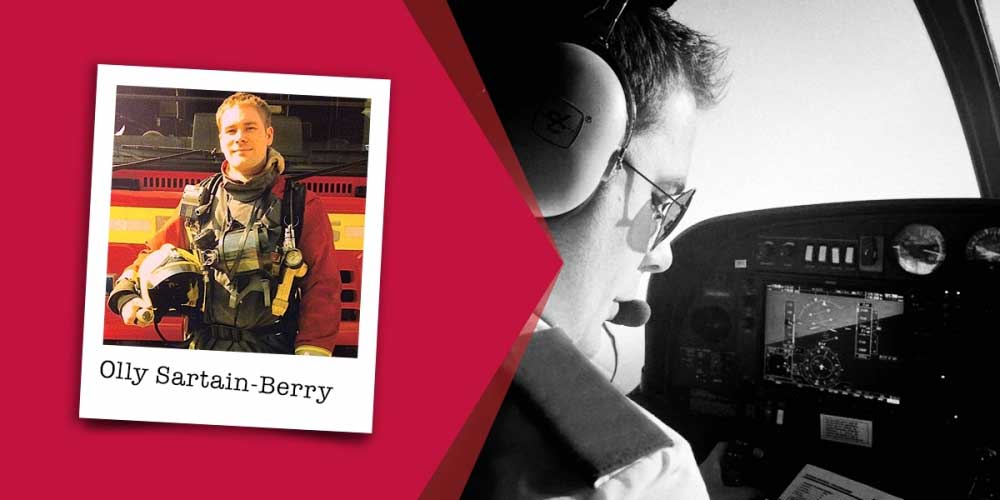 Olly Sartain-Berry, as a fireman, now a British Airways pilot

It may seem as though the only way to become an airline pilot is to start young, straight out of sixth form and financed by either the Bank of Mum & Dad or a lottery win.

But that’s not always the case. Plenty of career pilots have started later in life, scrimped and saved, worked in other jobs, and then taken the leap into pilot training.

One such pilot is Olly Sartain-Berry who started his pilot training with the L3 Airline Academy in August 2016, aged 27 years old. This is Olly’s story:

My boyhood dream was always to become a pilot, but limited financial options around the time I finished my A-levels meant that I had to postpone my ambition to fly, and find another way into aviation.

I worked in a few jobs in order to build experience that I would one day come to rely on at an interview with an airline, the most notable of which was with the Fire Service.

Although I was very disheartened at the time with meandering my way to becoming a pilot, venturing into the world of work helped me to develop many valuable skills and grounded me emotionally. With hindsight, I’m very glad that I wasn’t able to start flight training straight out of school.

With a family to provide for, resigning from the security of an established career would be, at best, a risky move. But, as an older candidate with a solid work history, I was finally able to explore loan facilities that were unavailable to me in the past.

My training with L3 went well. I knuckled down and commenced and completed each phase of my training as planned.

As is inevitable with any course of twenty trainees spanning nineteen months, some challenges arose periodically which required out-of-the-box thinking and a small dose of adaptation.

And adapt we did! I finished my training on time, with a frozen ATPL, a job, some amazing friends and memories that will last a lifetime.

Now I can finally say that I have achieved my boyhood aspiration to become an airline pilot. My new home: British Airways. I simply couldn’t describe how elated and privileged I feel to have been given the opportunity of a lifetime by one of the world’s most revered and recognisable airlines. Truly a dream come true.

My advice to anyone who dreams of one day becoming a pilot is simple: treat financial and academic challenges as mere problems to solve, and not as life-long barriers.

Crucially, keep the dream alive. Push doors, ask questions, change plans, overcome barriers. After all, these are all qualities expected of airline pilots.

The graduation ceremony for L3 Airline Academy is always a grand, jolly affair with lots of happy newly qualified pilots, many with jobs, and hugely r...

Piper Aircraft has received the largest civilian fleet order in its company history from L3 Commercial Aviation. The order is for 240 new Piper aircra...