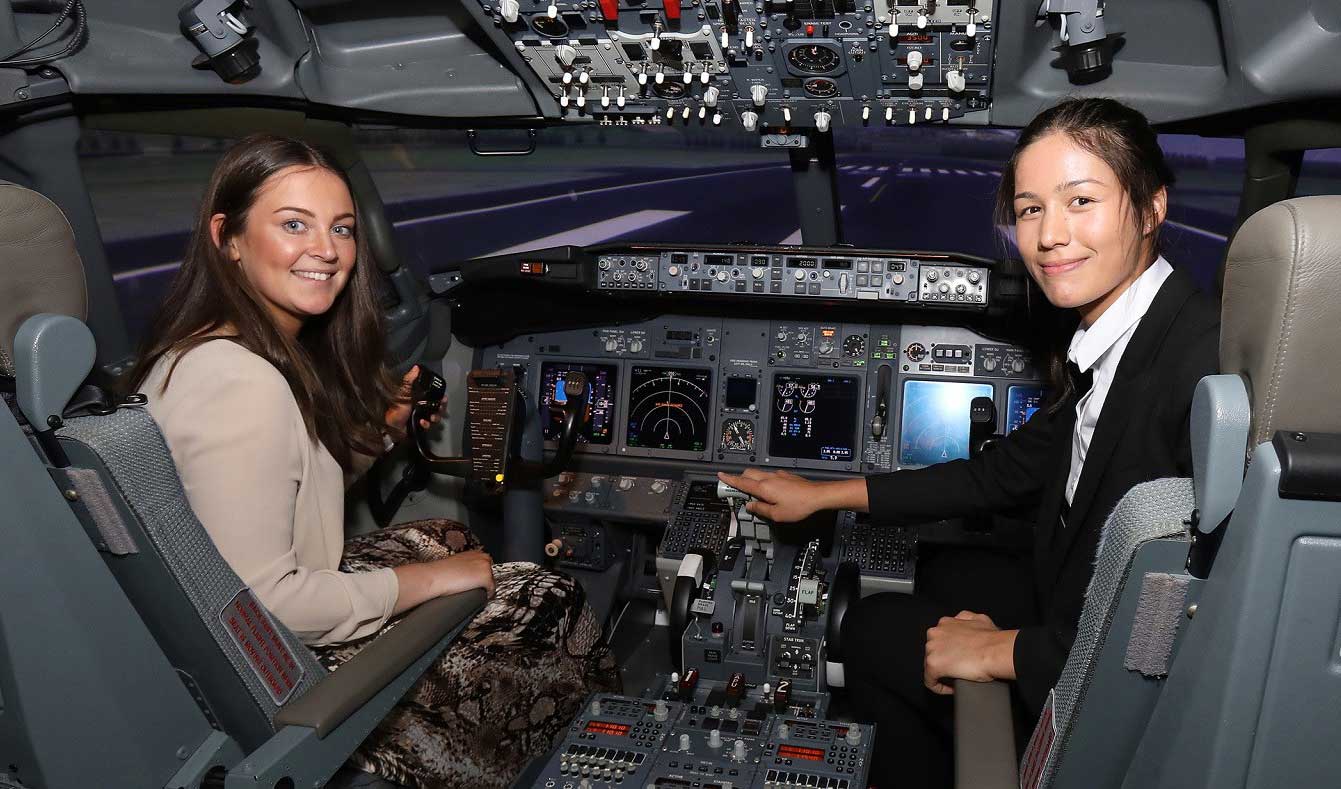 One of the winners of the 2019 L3 Pilot Pathways Female Scholarship, 22-year-old Olivia Clarke, will start a full-time integrated ATPL course with L3 Harris this September. What’s more, Olivia has just passed her PPL Skill Test so really is off to a flying start.

But it all so nearly didn’t happen. Olivia was working as a theatrical makeup artist when she went on a three-week trip to South Africa, volunteering in a game reserve. On the third of three flights to reach her destination, a female’s voice came over the PA from the flight deck – surprising Olivia because she just didn’t think women went into such roles.

“Before flying took over my life, I worked in London for a theatrical makeup company and doing some extra work in TV and films,” Olivia told PCN. “It was what I was good at but it had got to a point where I felt I needed something a bit more rewarding.

“On that flight to South Africa, I was really shocked by my reaction when I heard the female pilot’s voice over the PA. For the next three weeks I couldn’t stop talking about her. She came across really well, confident and really young.

“I quit my job in London soon after returning. I was in the garden with my Dad – we get all the training aircraft from Bournemouth Airport over our house – and looked up and I said, ‘Dad, I really want to do that’. I just came out with it.

“I went into BCFT at Bournemouth, had a chat with Bob (McGuire, managing director] there, and he recommended I go to Compton Abbas, see how I felt about the place and go from there which I really appreciate to this day still.

“Compton is such a great airfield to learn at, especially if you’ve never had any experience before. They’re so friendly, so enthusiastic… they’re like a second family. I spoke to Emma, who’s the owner’s daughter. She suggested I did a 30-minute trial flight, which I did and was hooked. 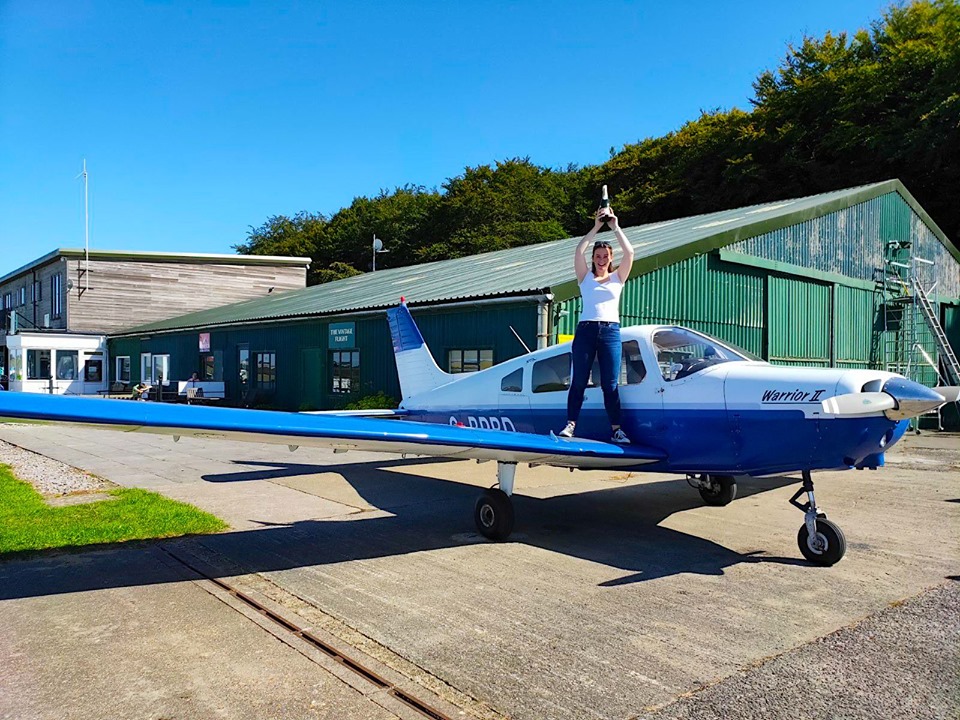 “The L3 scholarship came up online on my social media. I read it and thought, ‘Wow, that’s a lot of money!’

“I got onto it straightaway. I applied and had to answer three questions, and then take some online tests at home. They invited me to do the selection day that everyone has to go through. It was very daunting and scary but at the same time it was good.

“I made sure that I prepared for it before, with lots of mental maths, basic arithmetic, I even went back to my GSCE Maths notes. I also looked online and found some blogs about the selection process and did a bit every night after work to prepare.

“There was also a one-to-one interview which I didn’t want to over-prepare for with scripted answers to questions. Instead, I just made some basic notes, good examples of real-life situations that would back up my answers to whatever questions they asked. I made sure I gave in-depth detailed answers. There were some questions like ‘how would you prepare for a flight as first officer’ that I haven’t had experience of so that was a hard one.

“That was in February this year and then I had an email two weeks later to say that I’d passed selection. I was just stunned, I didn’t even think I’d passed. Then they gave a me a call on the 1st of March to say I’ve got the scholarship. 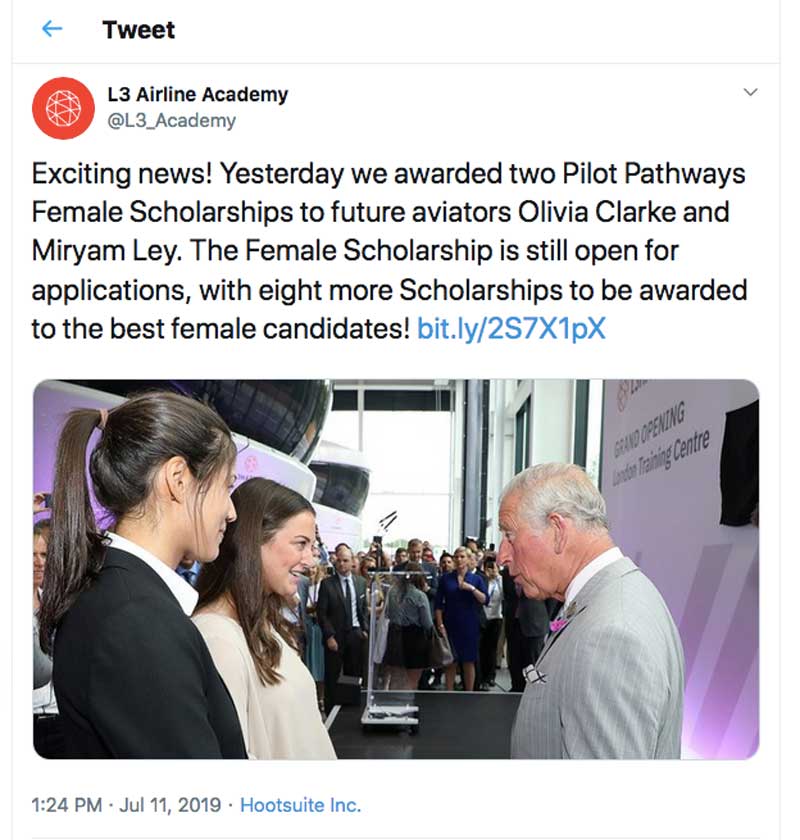 “Next I had to get my Class 1 medical at Heathrow. That proved more tricky than I thought it would be but I’ve got it now so everything’s fine. A few things flagged up on the ECG machine that didn’t come up in my Class 2 medical, so I had to have some further tests done. If anyone’s worried about the Class 1, I can assure them that it’s not the end of the world if something comes up. It just needs looking into to make sure you’re 100 percent.

“To be honest, I don’t know if I would have been able to start the training without the scholarship. I went to an L3 open day last year with my Dad in Southampton. I had applied for the easyjet programme but I withdrew because of the cost of the training.

“The scholarship has really given me the incentive and drive to get going and join the academy. It would have been much more of a struggle without the scholarship.

“I’ve met a few more female role models since taking that South African flight, including Hannah Kirkham at L3 – she was really lovely to speak to. I think now that as I’m transitioning into the female airline pilot culture, it’s not such as big a shock as it was a couple of years ago. It’s more of a proud feeling now. I guess I think I’m living the dream.

“I genuinely cannot think of anything I’d rather be doing right now.”