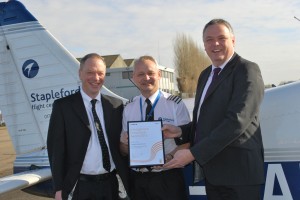 Stapleford Flight Centre is the first recipient of a new infringement prevention award introduced by NATS. According to NATS, the award acknowledges the work of the General Aviation community in helping to reduce the number of infringements in 2012.

Stapleford successfully halved the number of infringements by its members in 2012. The centre reported seven incidents, compared with 14 last year.  According to the flight centre, this is the result of a vigorous campaign waged by Deputy Head of Training, Brian Peppercorn.

Jonathan Smith, NATS Infringements Lead, said, “There can be no doubt that the continued and proactive efforts of the General Aviation community have underpinned the fall in the number of incidents this year. This new award is NATS way of recognising the important contributions made by our GA partners.”

Colin Dobney, Head of Training at Stapleford said, “Stapleford is very proud to be the first to receive the new NATS Infringement Prevention Award. I am delighted Brian Peppercorn’s campaign, supported by our team of instructors, has received official recognition with this award. Air Safety is the priority in all Stapleford’s training programmes for tomorrow’s airline pilots and for our Private Pilot club members.

“With an average 18,000 instructional hours and approximately 25,000 movements a year from an airfield in such close proximity to London’s complex airspace, halving infringements in 2012 is a significant achievement. We will continue campaigning to reduce infringements even further, aiming to achieve an even better performance in 2013.”

Infringements into controlled airspace are a safety concern for private and commercial pilots alike, but there are a number of practical and low cost initiatives that any club can introduce to minimise the risk. These can include encouraging the use of flight planning tools, such SkyDemon Light, the deployment of airspace warning devices, sharing any lessons learnt if an infringement does occur and making contact with air traffic control when flying near controlled airspace.

Jonathan added, “It is in everyone’s best interests to reduce the risk associated with airspace infringements. NATS is keen to work with additional GA partners achieve this aim.”

NATS reports no recovery for UK air traffic in 2021