Pilot careers outside the airlines 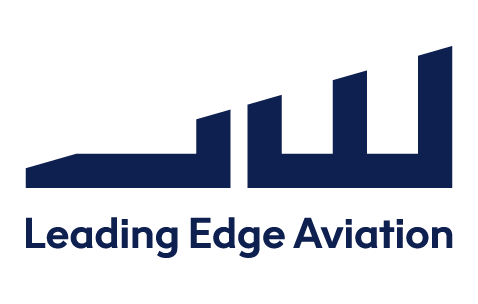 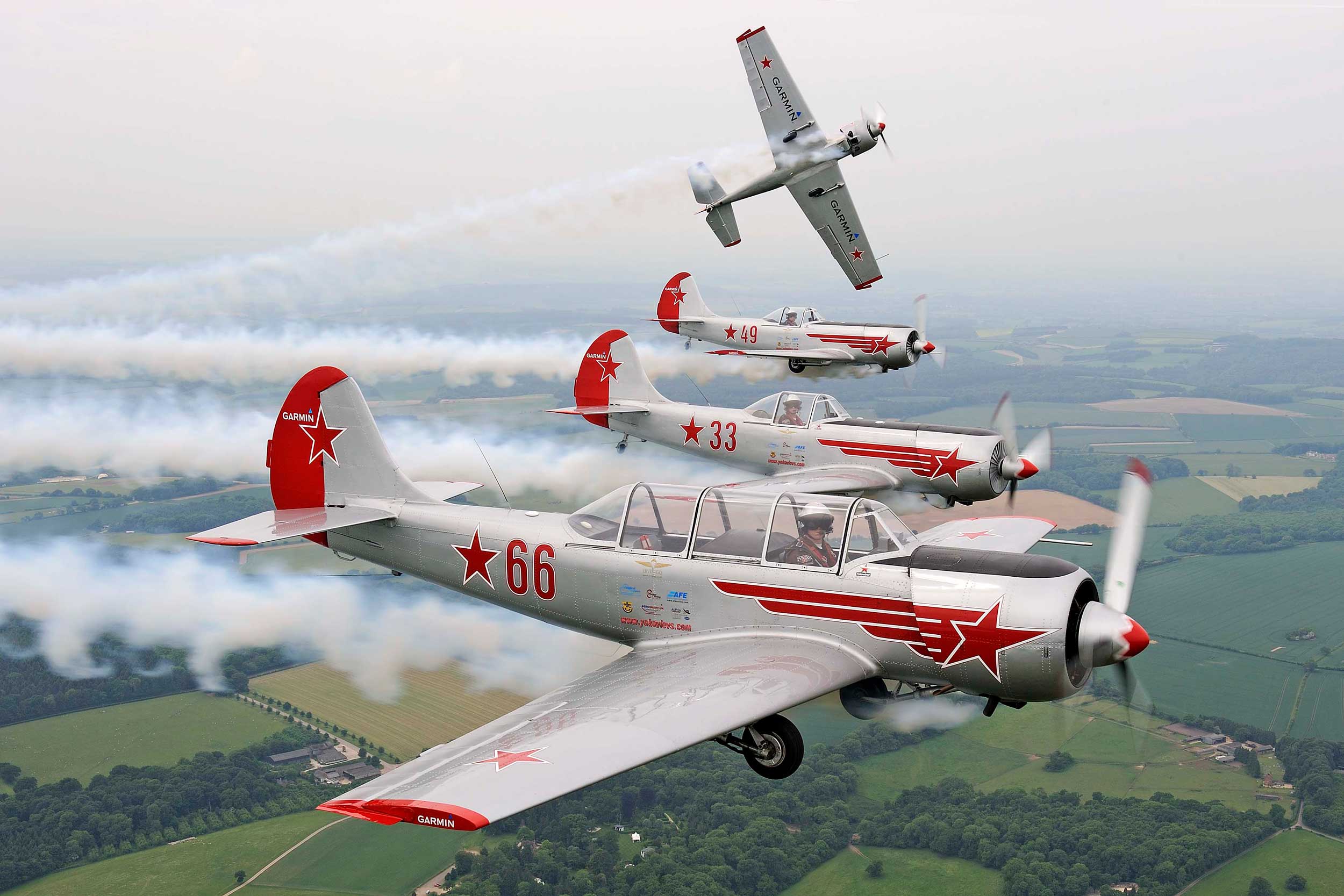 Not all pilot jobs are with the airlines. You too could be a display pilot – or any number of other flying careers

A career as a professional pilot doesn’t have to revolve around the airlines. Many other opportunities exist for flying for a living – and many pilots earning a crust that way would say their careers are much more satisfying than flying a highly automated modern airliner.

For instance, Matt Dearden, FLYER columnist and TV star of ‘Worst Place To Be A Pilot’ cut his aviation teeth flying people and cargo into the remote strips of Indonesia, a demanding task since the strips were rarely much more than a clearing in the jungle on a hillside. Now Matt’s is back in the UK flying a Pilatus PC-12 turboprop for a General Aviation operation – and wouldn’t have it any other way. In his spare time, he flies a Catalina flying boat based at Duxford.

OK, so maybe Matt is on the extremes of a career pilot but many pilot jobs are out there that are perfect for getting your flying hours up and skills honed ready for the next job, while others are goals in their own right. Glamour, decent wages, brilliant views and exciting adventure – you can find some and, in the luckiest of cases, all of these rewards. But, as always with aviation, getting there will take hard work and dedication.

Here are some examples of pilot career opportunities that exist – and don’t forget to take a look at PCN’s I Get Paid For This series for some real-life examples. 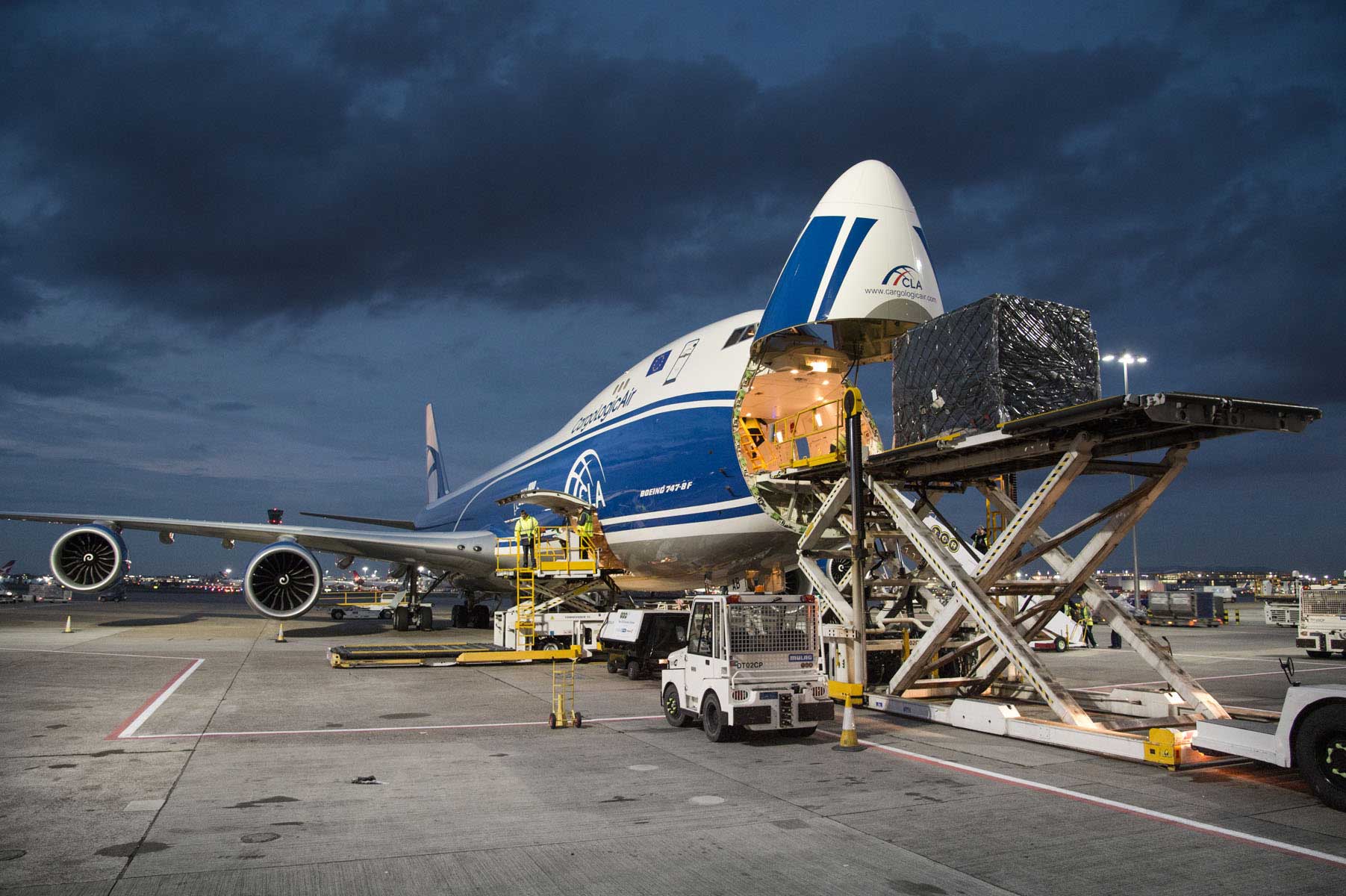 Not all flying is passengers: cargo freighters need pilots too! This is a Boeing 747-8F specially designed for cargo though many are converted airliners. Photo: Heathrow

Passenger flying worldwide has been dramatically affected by the Covid pandemic but flying cargo is still going on – in fact, in some cases cargo flights have actually increased. All that Personal Protective Equipment (PPE) had to come from somewhere.

Pilots of cargo aircraft need the same qualifications as those flying passenger airliners. The aircraft are the same, just with the seats stripped out and cargo restraints such as nets fitted. Often cargo aircraft are converted airliners, although some logistics companies including DHL and Fedex buy new aircraft equipped to their special needs.

But the life of a cargo pilot can be quite different. For a start, cargo flights are mostly at night leaving the precious daytime slots for passenger aircraft. Well, that was the case before Covid. Now airports welcome all flights at any time. The night time flying can play havoc with a person’s sleep and subsequent fatigue levels, so cargo pilots tend to get more time off between rosters. Rosters themselves can be changeable too, as the demand for a certain type of cargo changes.

The flight itself is different too. No troublesome passengers, running late, sick, drunk or just plain argumentative! However, there are no flight attendants either so pilots have to prepare their own refreshments and meals using a galley usually located behind the flight deck. No locked flight door either since there are no wandering passengers to worry about.

So how to deal with the night flights, the jet lag and the unstable roster? Dutch pilot blogger Eva Claire, who flies a Boeing 747-8 Freighter says, “I really don’t mind to have my roster changed regularly, but the crossing of time zones is something to get used to.

“One of our most common destinations has an 18 hour time difference with Hong Kong, so this is hard on your body clock. To work through the night, or ‘the backside of the body clock’, then try to sleep when your body clock says you should be wide awake, and then report again for duty: not easy!

“I knew it would be challenging, but it is a bigger challenge than I expected, especially the combination of the night flights and the crossing of many time zones, also within one working trip. I try to find a way to best deal with the long-haul lifestyle: to manage my sleep, do sports regularly and be active and outside a lot.” 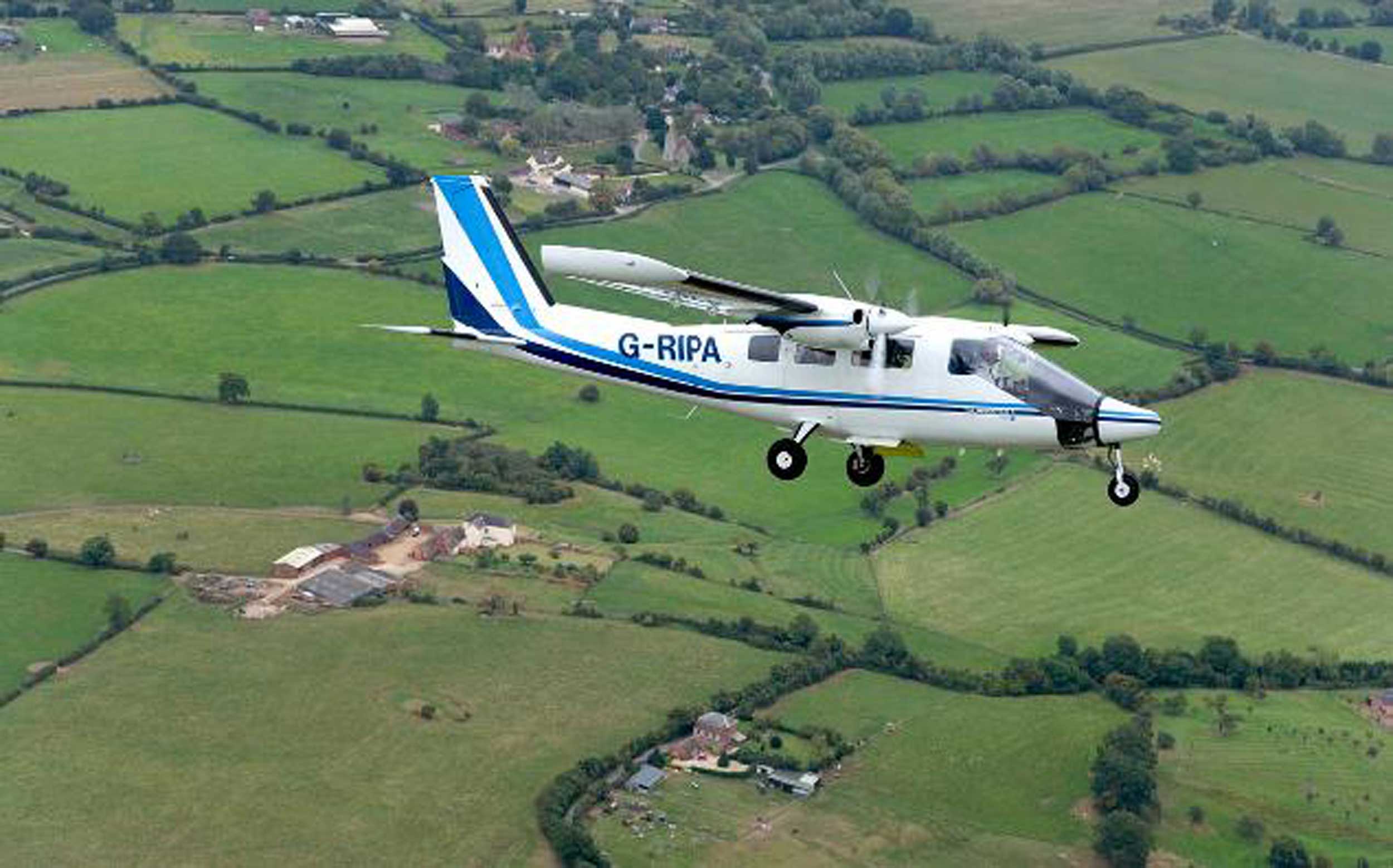 Flying as a survey pilot is demanding and rewarding

What they do Survey pilots fly pre-planned routes to record a variety of data from an aerial vantage point. They support many sectors, from archaeology to cartography to environmental surveying,  The type of flying is very varied – you could find yourself flying anything from a single-engine piston Cessna to a twin turboprop.

What they say  “It’s extremely variable and there’s no normal day with the job. While all the aircraft we fly are all equipped with autopilot, a lot of the surveys require hands-on flying, so it’s very different to airline flying in that respect. I’ve flown over the Orkney Islands and the north coast of Scotland, including seeing dolphins and whales, which certainly adds to the appeal of the job.”

Training It depends on who you’ll be flying for. A select few recruiters of survey pilots will ask cadet applicants for a basic PPL and 100 hours of P1 flight time. But for many roles, you will need a Commercial Pilot Licence (CPL) or Airline Transport Pilot Licence (ATPL). 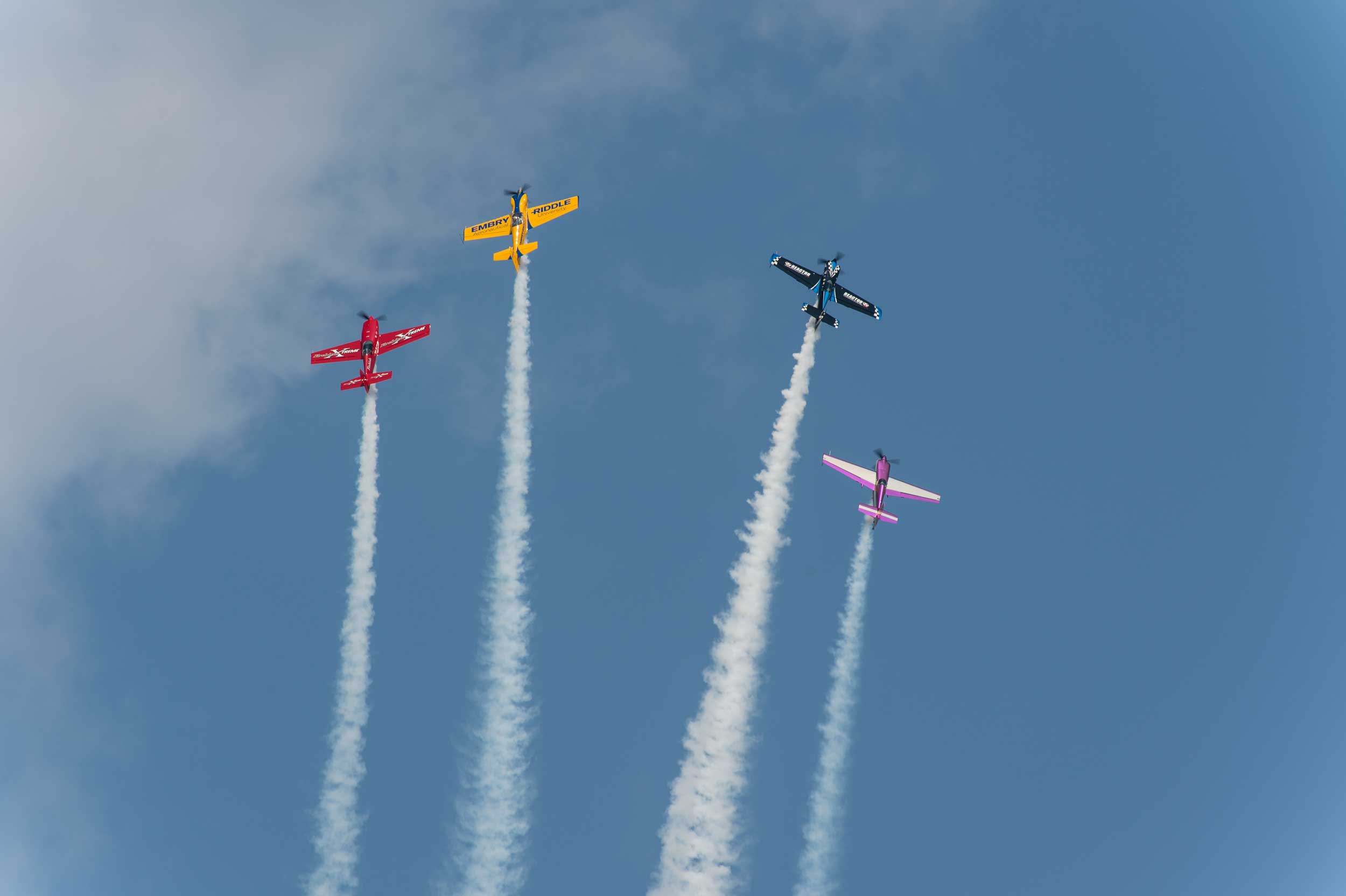 Flying as a display pilot requires discipline and dedication. Photo: The Yakovlevs

What they do Perform aerial displays over pre-arranged locations in a variety of aircraft. Display pilots can fly anything from solo aeros in a light aircraft, right up to the Red Arrows.

What they say “Air show display flying is inherently exhilarating and rewarding but it takes bucket-loads of dedication,” said Jez Hopkinson, lead pilot and owner of UK team, The Yakovlevs. Jez estimates the team spends around 100 hours working on the ground for every hour spent in the air.

“The image of the gung-ho air display skygod, kicking the tyres and then launching into the blue, is about as far from reality as possible!” explained Jez.

“It’s a fabulous discipline to be involved in, but it takes an enormous amount of hard work. Our pilots are drawn from all walks of aviation, including private pilots, instructors/examiners, airline pilots and military test pilots, so there is no inherent barrier to entry. The commonality is the possession of a mature mental attitude and ability to be fully team-focused.”

Training To perform at a public display you’ll need a Display Authorisation (DA) which is gained after a test flight in front of a CAA examiner. There’s no legal minimum hours required but the  CAA suggests a total of 200 hours flying for fixed-wing aeroplanes of which 100 should be as PiC. 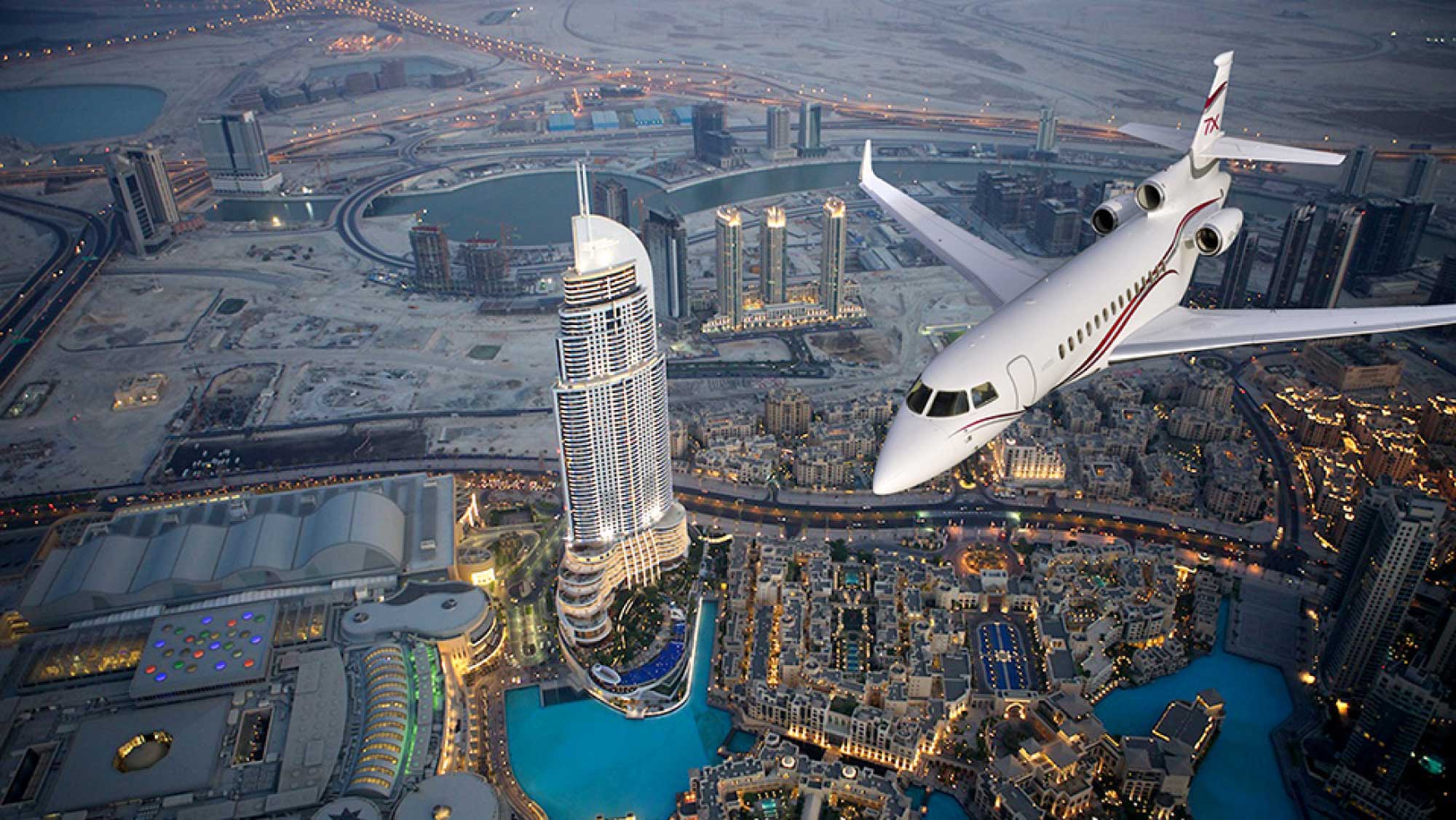 Business jet pilots get to fly some of the world’s most advanced aircraft – and go to exotic places. Photo: Dassault Falcon

What they do Fly corporate clients on behalf of charter companies on a private hire basis. While many assume that flying a bizjet is a stepping stone to something bigger, these positions are often more well-paid than airline jobs requiring similar experience – although there is also usually far more flexibility required.

What they say One pilot who wished to remain anonymous said, “Being a private jet pilot can have its benefits; I get to fly the A-listers, see some of the best places in the world, stay in five-star hotels and see places so amazingly beautiful, you cannot imagine.

“But the downside is that I spend a lot of time away from home and miss my family. It’s also a very tiring and demanding job with lots of early starts, late finishes and different time zones – which all take their toll on the body.”

Training As well as the usual CPL /ATPL requirements and a type rating – usually paid for by your employer – this is an area of aviation where communication and relationship building skills are just as important as your flying CV. 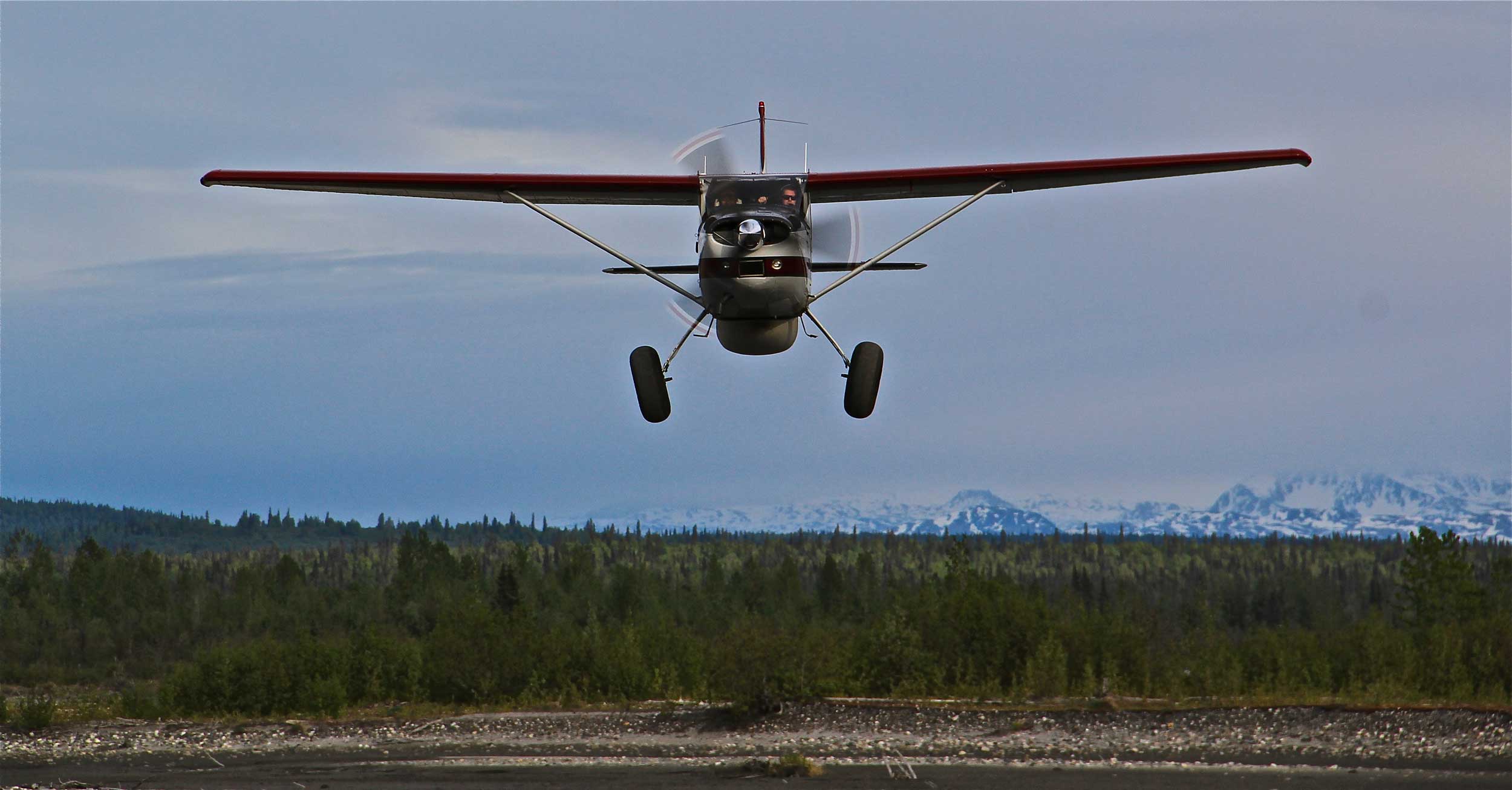 What they do Deliver aircraft from one location to another, often involving lengthy sea crossings. Weather and aircraft performance can be real tests of pilot skill, particularly when an aircraft is fully fuelled and operating under a special airworthiness certificate. However, the number of aeroplanes available for delivery has dropped dramatically in the last 20 years, which has made it less viable as a full-time career option.

What they say “I hear from pilots all the time who imagine that ferry flying must be the most glamorous of time-builders toward the ATPL demanded by the airlines.

“Yes, you can build time in a hurry if there are aircraft available to ferry and you can somehow become qualified to fly them, but there’s rarely anything glamorous about the job… ferry flying is characterised by hard work and long flying legs.”

Training Requirements for ferry pilots are often set by insurance companies and are usually high, with the pilot needing to have the appropriate route qualifications. Crossing oceans in small aeroplanes is not a job for a brand new CPL. 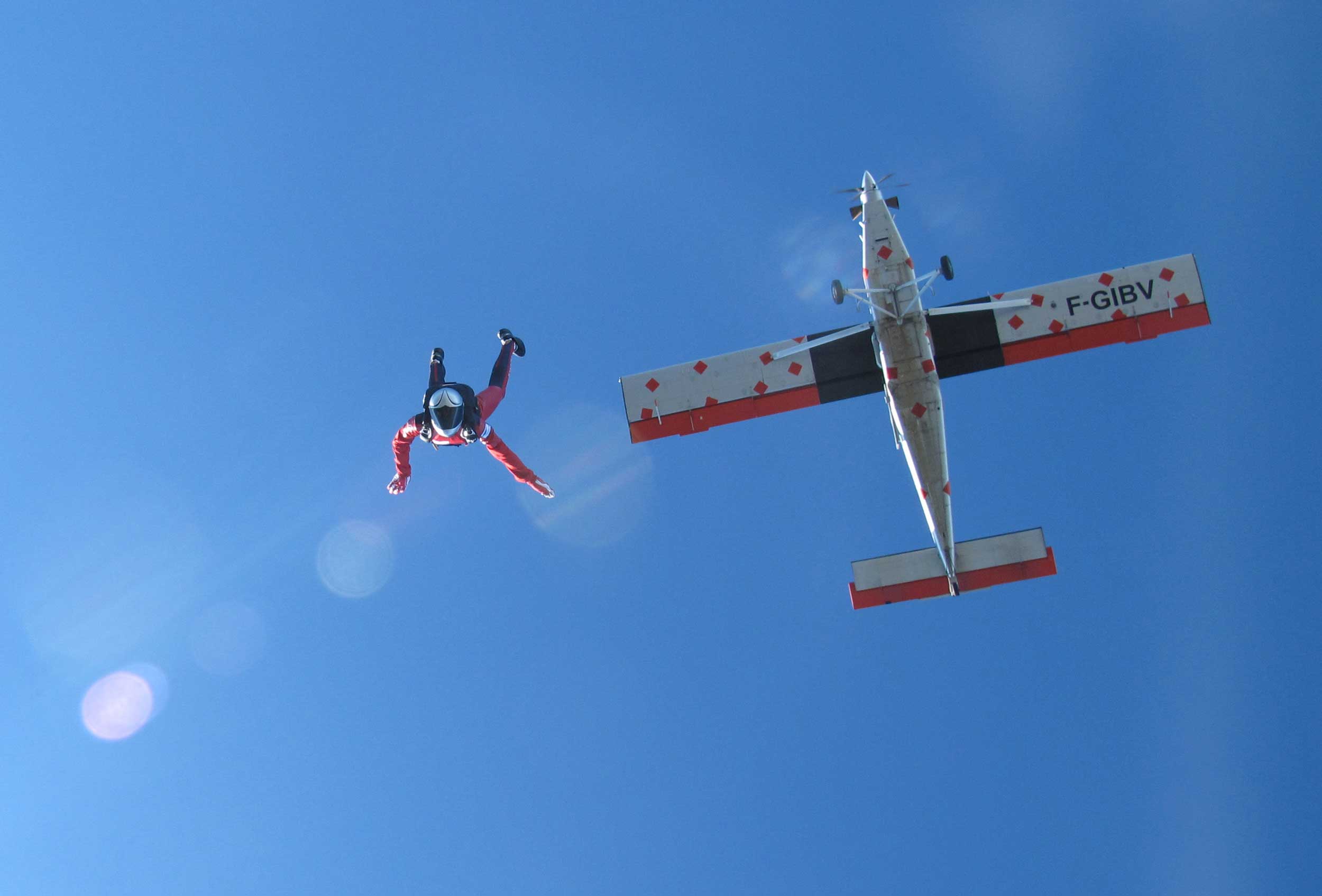 A job where your passengers prefer to bale out rather than stay for the landing! A jump pilot takes up parachutists

What they do Operate aircraft for skydivers to jump out of – defined by the British Parachute Association (BPA) as, “flying the aircraft efficiently to a predetermined point over the ground, arriving at a given height and a given speed, in order to permit parachutists to safely exit the aircraft and optimise their chances of flying their parachutes back to a designated landing area.”

What they say  “Flying skydivers is very challenging and W&B is one of the most challenging parts of it. In a C182, you will often have two skydivers hanging from the right wing strut, plus two more heading out of the doorway…

“I love the positive energy at drop zones! Everybody is having fun and most skydivers are as passionate about what they do as I am about flying them! According to my logbook, I have flown over 5,000 loads of skydivers and smiled every single time they have jumped out!”

Training  The minimum starting requirement is a PPL and 100 hours as PIC. Jump flying is classified as Aerial Work and in most cases requires a CPL. 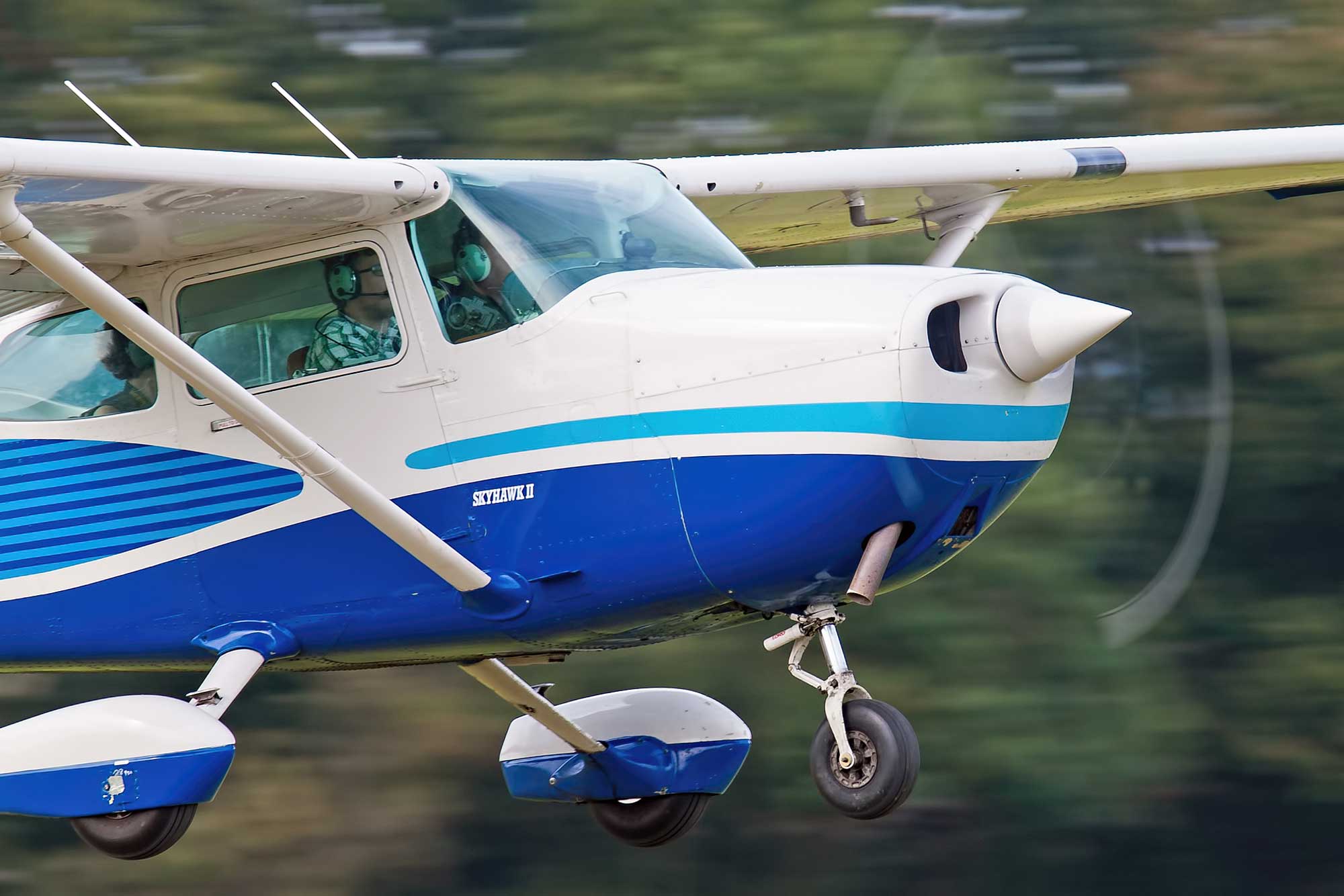 What they do Flying instructors teach people to fly… it’s as simple as that. However, the pilots they fly with can be anything from someone training for their Private Pilot Licence (PPL) up to putting a Captain with many thousands of hours in the cockpit through hell for his six-monthly sim check. In between, there are instructors for Differences Training,  Aerobatics, Instrument Ratings, Night Qualifications, Multi-Engine Ratings, Type Ratings, Upset Recovery Training and even Mountain and Sea Ratings.

Training The basic Flight Instructor (Aeroplane) rating allows you to allows you to conduct ground and flight instruction for the issue of PPL(A) and class and type ratings for SEP aeroplanes.  Beyond that, there are specific add-on ratings depending on what exactly you’re going to be teaching. For example, to instruct for an Instrument Rating you’ll need to be an Instrument Rating Instructor (IRI(A)).

PCN’s I Get Paid For This series

Be a pilot pilot careers
see all articles