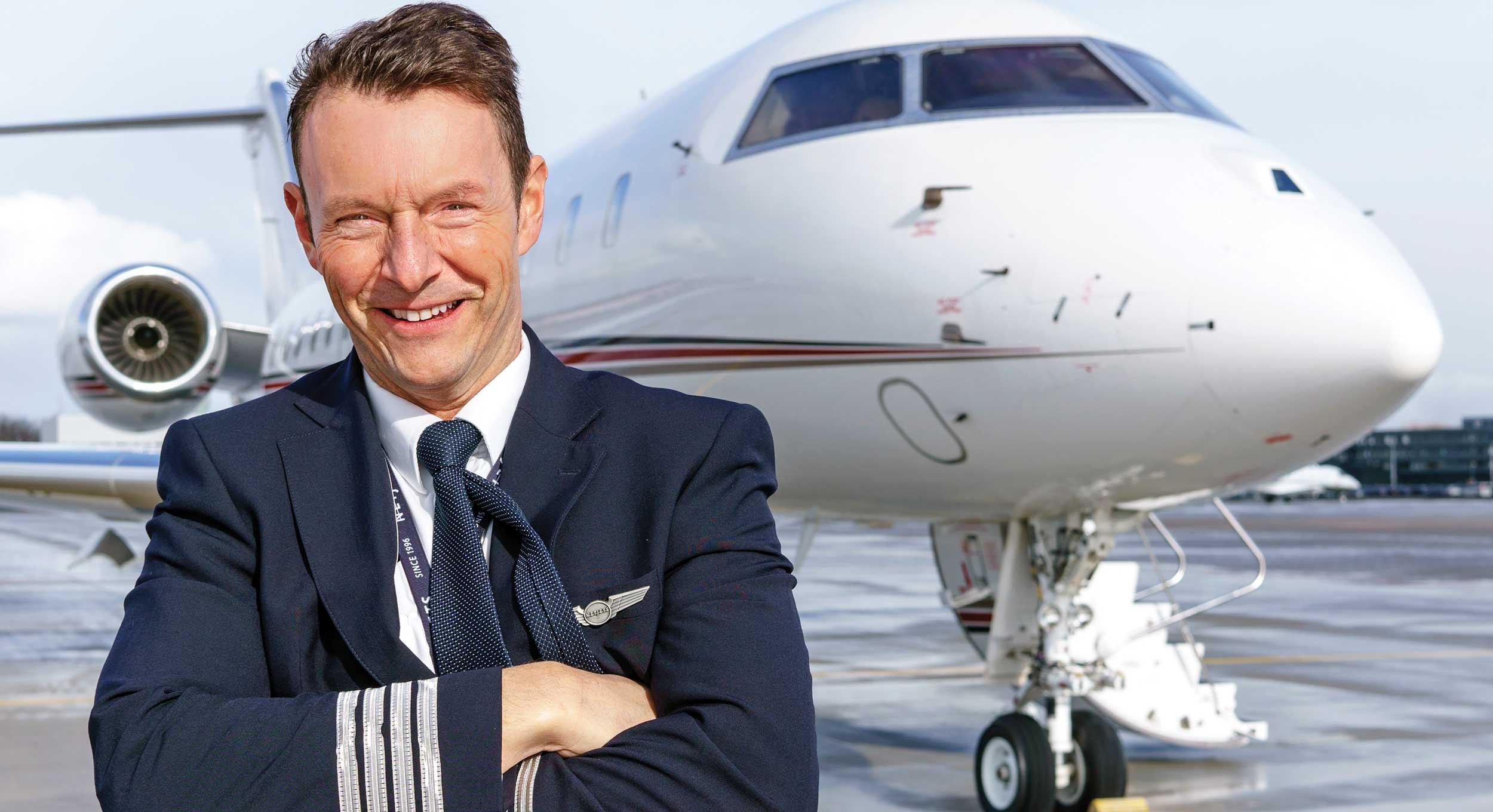 Listening to top bands and DJs while you’re piloting them around the world in a private jet is pretty cool, and for more of a challenge, just aerobat your Sukhoi. Interview by Yayeri van Baarsen

How did you get into flying?
I’ve always wanted to fly. Aged five, I wanted to become a policeman in the air, following the bad guys in an aeroplane. As a teenager I started in gliders before having my first powered lessons. With three side jobs and my parents’ help, I obtained my PPL before I learned how to drive a car.

Tell us about your job?
My job as a corporate pilot is very diverse. When you fly the world’s top executives, everything needs to be perfect and tailored to their requests. A lot of attention to detail is required – this goes as far as the amount of ice in a drink or what brand of tea they prefer. We know many of our clients personally and meet them in the terminal before take-off. During the flight, we often chat – sometimes we even get to listen to a DJ playing their latest set in the air.

Flying a high-performance private jet on random routes can be challenging and dynamic – one week you can be in the Far East, the next you might end up in the USA. I’m adding new airports to my logbook all the time.

Naturally, our pilots have substantial flying experience. However, it’s more important to have good management skills. Although there’s a big operational control centre, there’ll always be things to deal with on the ground. Fuel trucks can break, the catering may not be as expected, or ATC slots might ruin the plan, then it’s down to us to make it happen.

What training did you have?
In the military, I flew the Westland SH-14 Lynx helicopter for the best part of my flying career. Running your own airline company on the back of a ship taught me many things I still benefit from.

Back then, I was a young officer responsible for delivering a mission-ready helicopter. If it breaks down or the weather is questionable, you need to have a good story to explain to the ship’s commander why it’s better not to fly. You learn to say ‘no’ at the right moments. Nowadays, I run into similar situations and have to tell our top clients that plans might change. After the Lynx, I flew the Lockheed P-3C Orion, for fixed-wing experience.

Frank is passionate about aerobatics and owns a Sukhoi SU-26M, which he uses for airshows, events and competitions

What’s been your favourite flight?
It involved a well-known band, who started a joke with our flight attendant, telling her that they were normally flying a Boeing 727 from a UK grass strip. They came straight from a concert, carrying their instruments. The lead singer, an aviation enthusiast who flies helicopters, asked to join us in the cockpit for landing. We flew into north London at night, with clear skies, breathtaking views and the band playing their songs in the back. Things like these make this job unique.

And your favourite airfield?
The Alpine airports are really nice. Being surrounded by snow-capped mountains when descending into the Alps is amazing. But a runway is a runway – it’s the whole combination of whom you’re with and where you’re staying that has to be right. I’ve had brilliant times in small, unknown places and have felt stuck in airport hotels in cities that rock.

Do you get to fly much outside work?
Yes, aerobatics is my passion – I’ve been hooked on it since military training. I own a Sukhoi SU-26M, one of the best aerobatic aircraft ever built, which I use for airshows, events and competitions. Flying it is a never-ending challenge which requires lots of training and thought, but is also very rewarding.

A nine-cylinder radial engine, huge control surfaces and big propeller are spectacular characteristics. Running it comes at a cost, so I’m lucky to get support from my sponsors, Garmin, Bose and Jeppesen.

And the most valuable career advice?
Go for what you want. It’s even become my motto: ‘If you really want it, you’re going to get it’. You have to want it badly, though. It’s a struggle, especially when starting you’re a company, but keep in mind that you’re not the only one. Everyone I fly – from successful pop stars to CEOs and bankers – they’ve all started from scratch and share the same spirit.

Frank van Houten flies a Global 6000 for one of the largest providers of fractionally owned private jets. He also runs Dutch Rush Aerobatics, entertaining crowds with his Russian-built Sukhoi

aerobatics Be a pilot corporate pilot
see all articles