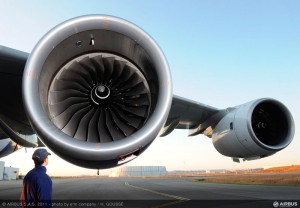 The Rolls-Royce Trent XWB engine has taken to the skies for the first time, powering an Airbus A380 test aircraft in Toulouse, France. The aircraft flew with one of its four Trent 900 engines replaced by a Trent XWB.

The Trent XWB is claimed to be the ‘most efficient civil aircraft engine on offer in the world’ and will power the new Airbus A350 XWB.

The Trent XWB is the fastest-selling Trent engine ever, with more than 1,100 already sold. At the 2011 Paris Airshow, Rolls-Royce also announced that it will be the exclusive engine supplier for the longer range A350-1000 aircraft.

Chris Young, Rolls-Royce, Trent XWB Programme Director, said, “It’s a great moment to see the Trent XWB take to the air for the first time. Today’s flight is the product of years of work and demonstrates the progress being made on our journey to deliver this world leading technology.”

The Trent XWB ran on a ground test bed for the first time in June 2010 and test results have shown it to be the most efficient large civil aerospace engine ever produced.

Data recorded during a series of test flights that will accumulate around 175 flight hours and which will run for a seven month period, will validate results from ground testing and demonstrate the engine’s in-flight performance. The Trent XWB has already successfully completed more than 1,500 hours of testing, including endurance running, icing and simulated altitude.

The first of an order of three Diamond DA42-VI twin engine light aircraft has been delivered to Airbus Flight Academy Europe for multi-engine t...

Air Paris Academy, based at Tours Airport, France, is to buy four Tecnam P2010 MkII aeroplanes with an option for more. The P2010 MkII is powered by a...