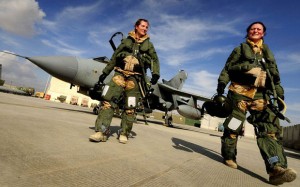 A woman who has become the first to command an RAF fast jet squadron is expected to lead bombing missions over Iraq this summer.

​Wing Commander Nikki Thomas​, who took charge of the newly reformed No 12 Squadron at RAF Marham in Norfolk​ ​on 9 January 2015, flew a daring low mission to help foil a deadly rocket attack on a UK base in Afghanistan.

The 36-year-old is a weapons system operator with extensive experience of combat operations, clocking up more than 35 missions in Afghanistan within three months alone. Read more…

Flying instructor Christine Draycott is the first ever civilian pilot to become a Qualified Flying Instructor (QFI) for the military. Christine, who h...

+VIDEO It’s no secret that the numbers of female pilots in commercial aviation are low, just reaching 5% of the total, despite several airlines doin...