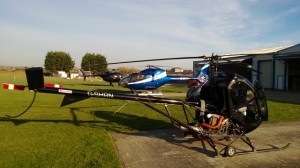 Advance Helicopters, at Shoreham (Brighton) Airport on the South Coast of England has now received its approvals to teach to EASA Commercial Level, and Helicopter Type Ratings.

Advance Helicopters was founded in February 2012, and already had approval for teaching Private Pilots’ Licence for both European and American ratings.

“This was something we’d both already taught with the company we were previously with,” said Spencer Phillips, Co-Director of Advance Helicopters, “so we have the experience, and students wanting to proceed, but obviously we had to wait for the official stamp.”

“It’s great that these approvals have now been granted,” agreed James Morrey, co-owner of the company, “as it means that we can now take a student all the way through from Private to Commercial, providing continuity, which can be helpful in such situations.”

The social side of Advance Helicopters, which is something the owners wanted to build on is also going well. “We have a gathering locally every few months for staff, students, partners, and anyone else who wants to come, which is really fun as it enables us to catch up with everyone. We also get students, past and present, dropping in just to say hello at the office, especially at the weekends, which is great. We really appreciate that people want to come and see us, even when they’re not flying, and hopefully says a lot for the friendly, social atmosphere of the company.”