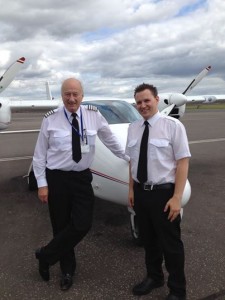 Laurence, who worked in the medical field, had never flown before the summer of 2013 when he started his PPL course. In August 2014, he passed his final theory exams with flying colours, with a pass mark of 89% and is now an fATPL qualified pilot awaiting interviews with some of the leading airlines.

Laurence said, “The Aeros’ modular training programme was ideal for my requirements and allowed me flexibility to plan my time. The Company’s policy of two trainees per instructor also meant that I received lots of one-to-one training. Further, there was a huge cost saving over other integrated courses with the entire programme costing me well under £50,000.”

Aeros’ Head of Training, Captain Paul Freestone said, “Laurence was a model student who worked hard to achieve his goal of becoming a pilot with a leading airline.”