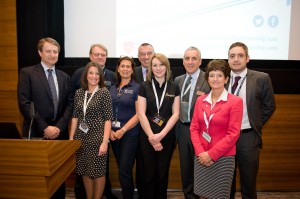 The Aviation Skills Partnership has announced a number of new partners in its pilot degree/apprenticeship framework. The announcement came at the first London Professional Flight Training Exhibition of 2014, which took place on Saturday 12 April at the Sofitel Hotel, T5 LHR.

ASP used the platform of the event to announce a number of new pilot degree schemes, in partnership with Helicentre Aviation, Tayside Aviation and Flying Time Aviation. The announcement follows on from 110 cadets successfully joining the scheme with CTC Wings. The new degree framework, which enables cadets to follow the usual route to pilot training through the ATOs involved in the scheme, but also attaining a degree at the end, has been created in conjunction with airlines, the CAA, the BBGA, GAAC,  HCAP, RAeS and a number of ATOs. The idea behind the framework is to allow cadets to apply for student-loan type funding which will support their degree and decrease the cost of pilot training, making it more available to a wider pool of applicants.

CTC also added to the news on the subject of a pilots’ degree framework, with the announcement that the CTC Wings easyJet MPL programme has been launched, with an option to enrol on the new ‘easyJet Degree’. Find more here.

Simon Witts, Chairman and CEO at Aviation Skills Partnership, explained, “We’re really pleased to have easyJet on board, and also be able to announce links with other airlines, including Logan Air through our new scheme with Tayside Aviation. We’re hoping that more and more airlines will recognise the benefits of this apprenticeship scheme and we can announce more partnerships in the near future.”

More details are to be announced very shortly, so keep an eye on www.aviationskillspartnership.com.

Abbie kicks off her pilot career with Tayside’s degree

Just a few months ago, 19-year-old Abbie Chalmers from Glenrothes was a high school student. Now she has started a 12-week course to take her to her P...

Aviation skills specialist, Aviation Skills Partnership (ASP), has spelt out its vision to create the next generation of aviation professionals. Speak...

Seven new students have started on the pilot degree course run by Tayside Aviation, based at Dundee Airport, in conjunction with Middlesex University ...