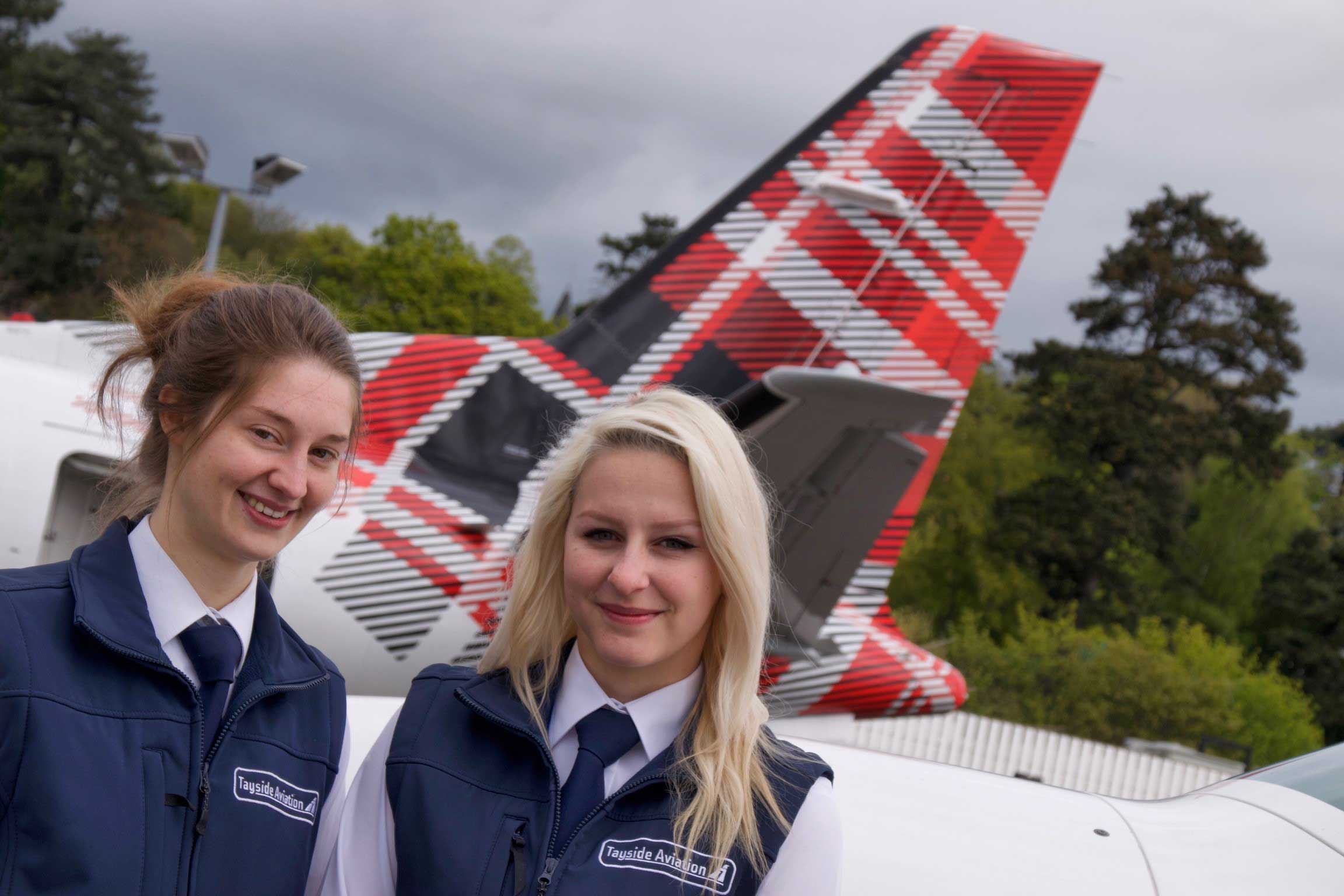 Rachel, left, and Kerrin both took Tayside’s pilot degree course as their route to a flying career

Heading off to join Loganair as First Officer, Rachel will be the first student on the BSc Professional Pilot Aviation Practice course at Tayside Aviation, the only ‘flying degree’ available in Scotland, to fly Loganair’s Embraer jet.

With 700 flying hours under her belt, Rachel will boost Loganair’s drive to recruit more female pilots. At present, only 12% of UK pilots are female, with the worldwide figure even lower at just 6%. Loganair is actively reversing the trend, with 13% female pilots.

Neil Hughes, Loganair’s Chief Pilot said, “Congratulations to both Rachel and Kerrin. We’ve employed female pilots for over 30 years and we’re extremely proud to remain as one of the most diverse workgroups of any UK airline with 13% of our pilots being female – higher than the UK average and double of that globally.

“We’ve whole heartedly invested in driving forward recruitment of people from all backgrounds to take up a flying career, and we continue to encourage everyone to fulfil their aspirations to fly.”

Rachel, a graduate of St Andrews University, began her PPL training at Prestwick aged 16, flew solo later that year and gained her PPL at 18, while studying for a Mathematics and English degree.

Rachel said, “My Grandpa gave my brother a trial lesson for his 17th birthday, and I had the opportunity to be the backseat passenger. I immediately caught the flying bug, and began my training a few months later.

“Aviation was the only career I ever really wanted to pursue but when I was leaving school and university, the opportunities in the industry were limited.

“I taught English in Vietnam for six months before returning to Britain but then had to decide whether to continue with teaching or commit to aviation. It was at this time that I discovered the degree programme at Tayside Aviation and it seemed like the perfect route into the industry for me.

“I’ve gone on to enjoy two fantastic years at Tayside Aviation, both as a student and as an instructor. Alongside studying I was able to get involved in a wide range of experiences, including a ten-day tour of Britain.

“Instructing for the last year has been an opportunity to further my aviation experiences as well as instil a love for aviation in others.

“Working closely alongside other instructors, engineers and air traffic controllers has given me an insight into the aviation industry that I would otherwise not have had. I feel that my time at Tayside has been excellent preparation for progression into the airline industry.” 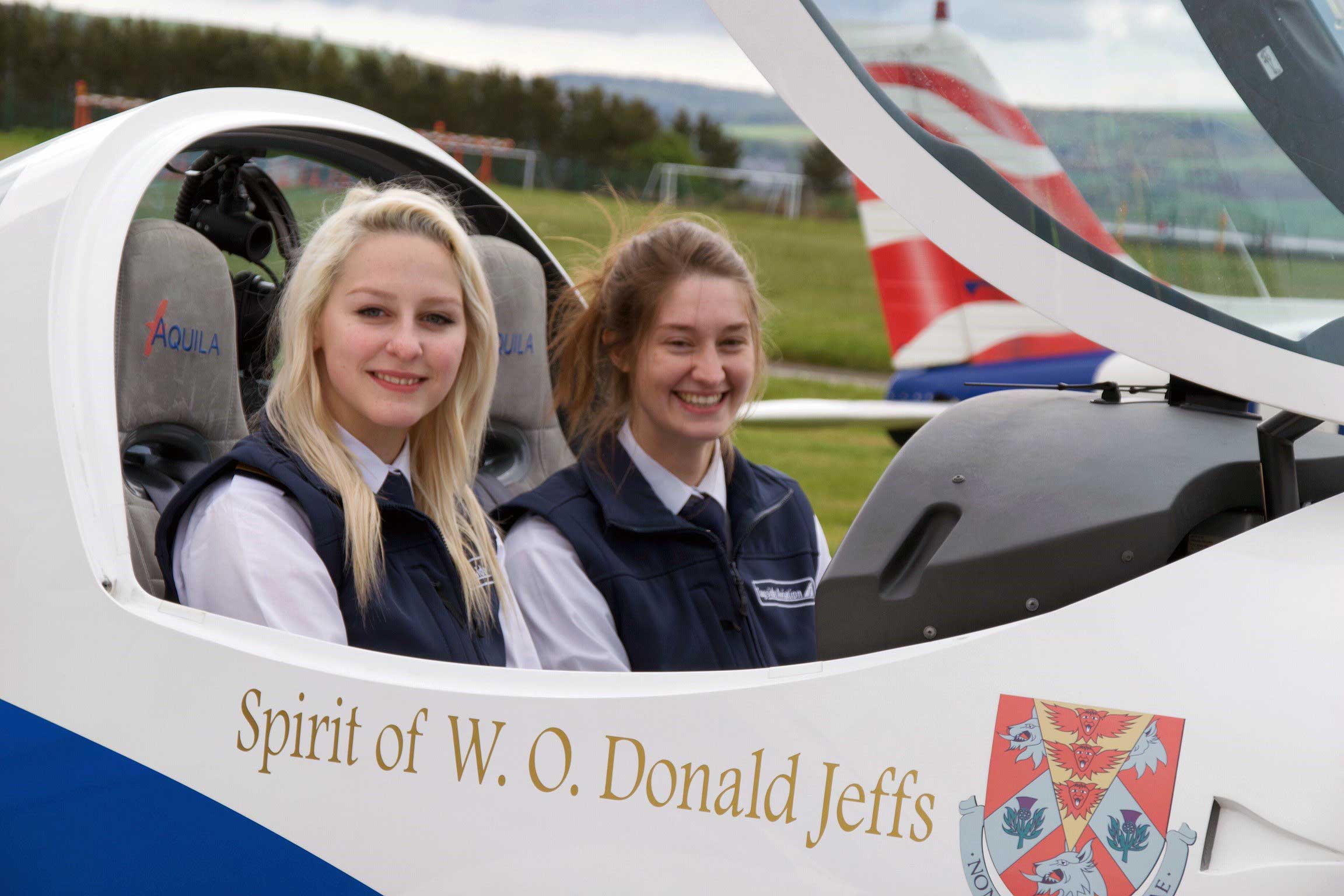 Meanwhile, Kerrin Dutton will now take up the role of Flight Instructor with Tayside Aviation. Originally from South Africa, Kerrin lived right next to Prestwick Airport as a child.

Kerrin said, “Seeing such a variety of aircraft coming in and out daily fuelled my ambition further. It was only when enquiring at various flight schools that I began to realise that not many women pursue this as a career but I was determined to do it.

“I started my training at Prestwick Flying Club where I flew solo before driving a car! I worked hard to earn money to pay for my flying lessons and eventually decided to move my training to Tayside Aviation when I heard about the degree course. It finally gave me an avenue to begin my aviation career.”

Having flown a total of around 240 flying hours, Kerrin hopes to follow in Rachel’s footsteps in the future, ideally flying the Twin Otter at Loganair operating around the islands of Scotland and, ultimately flying jets like Rachel.

“Because students are eligible for financial assistance, the degree is a fantastic and much more affordable pathway to becoming a pilot, compared to gaining a licence privately. We hope that Rachel and Kerrin’s achievements encourage others to consider a career in aviation, particularly other women.”

The degree programme accepts two intakes per year, in April and October, with around 24 students currently working towards their degree.

CAE has announced the launch of the Loganair Graduate Pilot Programme and the signing of a new three-year pilot training contract with Loganair. The n...