Abbie kicks off her pilot career with Tayside’s degree 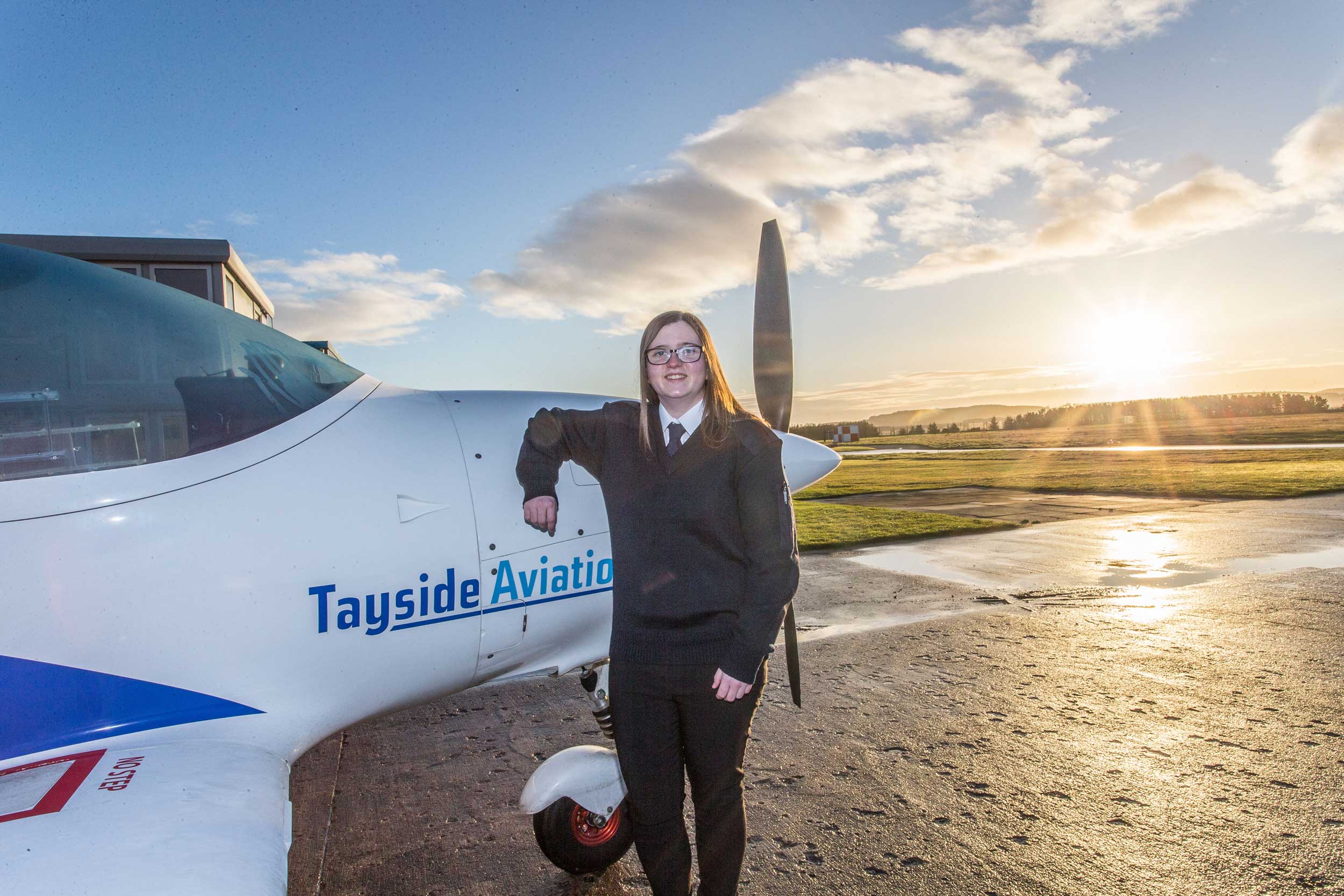 Just a few months ago, 19-year-old Abbie Chalmers from Glenrothes was a high school student. Now she has started a 12-week course to take her to her Private Pilots Licence, followed by fast-track entry on to an Honours pilot degree.

Abbie has joined Tayside Aviation’s BSc Honours Degree programme and the PPL course is designed for those with very little or no previous flying experience.

Abbie said, “Up until I started my Initial Flight Training course, I had only had a 30-minute flying lesson back in 2015 with Tayside Aviation down at Fife Airport.

“My interest in flying started around the age of 12 when I started high school but, at that time, I never realised it was possible for females to become pilots. It was more of an interest where I’d go to Edinburgh Airport, sit next to the runway and watch planes for hours and hours!

“It was around the age of 14 that I realised female pilots did exist and that’s when I started looking into what, exactly, it takes to become a pilot.

“I soon realised, however, that there was a lot of money involved so I never really thought much of it again until I had my first flying lesson. It was through speaking to the instructor after the lesson that I found out about the different options for becoming a pilot through Tayside Aviation.

“I went straight home afterwards and started looking into the courses on offer and then attended an open day about a month after.

“The Tayside Aviation course appealed to me because of the security that comes along with the training as well as it being much more affordable than other courses that I looked into.

“The atmosphere at the open days was also really appealing – everyone was so friendly and helpful and any student I spoke to had amazing things to say about the course and the people. It’s only been a couple of weeks but I already feel that I have learned so much and everyone has been so welcoming and helpful. I’m loving every minute of it!”

The course also includes all ground school classes, which run to around 50 hours, free landings at Dundee and Fife Airports, one year’s free membership of Tayside Flying Club and insurance.

On completion of the IFT, students will gain a place on the degree programme which is run by Tayside Aviation in conjunction with Middlesex University and Aviation Skills Partnership. There are currently over 40 students working towards their degree.

Launched in January 2015, the BSc (Hons) Professional Aviation Pilot Practice programme, the first of its kind available in Scotland, greatly increases and accelerates students’ chances of gaining employment as airline pilots in what is a highly competitive industry.

The degree aims to enhance students’ career progression within the industry and hopefully attract more females who currently represent less than 10% of UK commercial pilots.

Students can also access funding to help with the often prohibitive costs of becoming a pilot. This will reduce the cost of the training by one-third and will include a Flying Instructor Rating. The three-year programme with Tayside Aviation includes structured hours building as well as the CPL, ME IR and MCC training.

Jim Watt, managing director, Tayside Aviation said, “Many people love the idea of becoming a pilot but think the costs will be prohibitive. With all the partners in the degree process, we have a common interest to reduce the cost of obtaining a licence and provide the best support to students in our care.

“I am delighted that we now have this foundation programme airborne which is a great way of ensuring that the students are 100% set on the degree before investing in it – as well as ensuring that they have the right work ethic, aptitude and ability.”

Students must be at least 17 years of age. Full entry requirements for the course can be viewed at www.taysideaviation.com

Aeros Flight Training and Tayside Aviation have formed a partnership to build a UK network of modular flight training schools. It will be called the F...