Back in November 2015, Wings Alliance was launched at Pilot Careers Live London, with the intention of taking on “overpriced” flight training. Nearly one year on, we catch up with CEO Rod Wren, who explains how the trade association is preparing for a flight training “revolution”

It’s a choice that every aspiring pilot faces: whether to follow the Integrated or Modular training route. The Modular route will always win on cost; while Integrated courses often cost around the £100,000 mark for an ab initio to fATPL programme, many Modular-trained pilots will cite a spend closer to £50,000. The flexible nature of a Modular course is also a positive, as it allows pilots to manage their training around another job, often still earning money as they train and build hours. However, in the past, Modular schools haven’t always been able to forge the same airline links as the bigger Integrated schools, and subsequently, Integrated has been seen as the ‘better’ route to an airline flying job.

It’s this preconception that Wings Alliance was so keen to take on, when it launched in November 2015. Comprised of training organisations including Bristol Groundschool, Airways Flight Training, Stapleford Flight Centre, Tayside Aviation, Cardiff Aviation and Ultimate High to name a few, other schools include individual representative companies in France, Greece, Jordan, the Netherlands and Poland. All members are EASA-approved and committed to functioning together to provide a clear paper trail for Modular-trained pilots, as well as maintaining training standards across member schools.

When Pilot Career News first spoke to Wings Alliance, one member was keen to stress the issue of affordability. Bruce Dickinson, MD Cardiff Aviation and WA member, said, “Flight training is overpriced, and people have been getting away with it,” he said. “We know, in the industry, the cost of delivering Integrated courses. We know the profit margins that are being created, and how money’s being spent too. So we know that flight training should be available at a much more reasonable price.”

For CEO Rod Wren, formerly an RAF pilot who has held top training positions with CAE Oxford Aviation Academy and CTC Aviation, it’s important to emphasise that as well as offering affordability, this Alliance of smaller, Modular providers can compete with the airline links of the Integrated schools. It’s just a matter, he explains, of emphasising the differences, and advantages of the Modular schools’ output. “We’ve got quite a diverse input here, in terms of age and experience, and background. A lot of people going through the Modular route are career changers, whereas generally people who go into Integrated programmes like CTC’s or CAE Oxford’s are a little younger.”

With fewer people choosing to train towards a pilot career, airlines want to make sure that their pilots are going to stay the course, and future-proofing their pilot workforce has become a key concern for recruiters. That’s where Modular-trained pilots have an edge, says Rod. “It’s a stability thing; for the airlines that employ people at the very beginning of their careers, one of the challenges they face is that people will often want to move on, they’ll want to move up the ‘glamour ladder’ and those who are a little bit more mature, in general perhaps won’t move on so often, which means there’s better retention rates.”

“For airlines such as Flybe,” adds Rod, “there’s always a concern about command positions. They don’t want to be simply training up First Officers for other airlines. Retaining someone beyond the point when they’re ready for command is obviously a big issue for them.”

And the Alliance is, so far, doing its job. “All of our cadets have gone to Flybe so far,” explains Rod, “and we’re placing about two cadets a month at the moment. The first of them is now flying from Cardiff on the ERJ and we have another starting soon on the Dash 7 in Birmingham in mid-September.

“All the feedback has been pretty good. We’ve been shaking down the details and the first Airline Pilot Certificate (APC) was a trial course; we sponsored people to go through that to make sure that we were getting it right.” 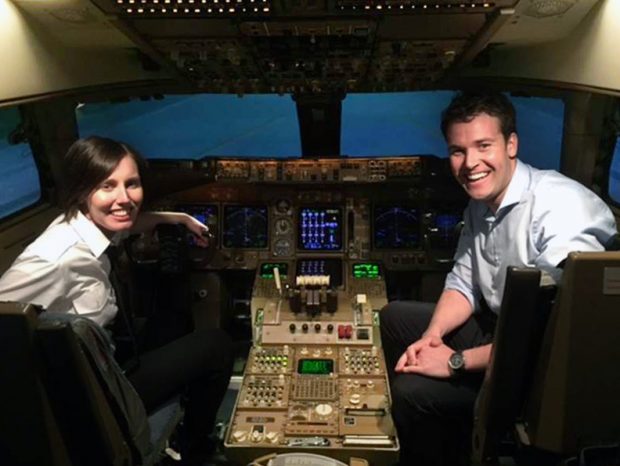 Michael Windsor completed his training at Wings Alliance schools, and went on to enrol on an Airline Pilot Certificate with the Alliance. “It was clear to me from the beginning that I wasn’t going to fit the Integrated model of training, as I didn’t have the access to the funds required for the programmes,” explains Michael. “The great thing about the Wings Alliance programme was that I was able to select the partners to train with and to set my own timescale. Of course this helped me to balance my finances as I was also working part time.

“It was clear to me from the beginning that I wasn’t going to fit the Integrated model of training, as I didn’t have the access to the funds required for the programmes”

“One of the most positive aspects of the Wings Alliance team is their passion for an individual student to succeed. They get to know you as a person and I found they were incredibly helpful and supportive throughout my training. Post CPL/IR, I would advise pilots to think about what they want to achieve in their careers and look for the placement service that will help make that first step into the industry. Recruitment departments know and understand the quality of your training and give candidates the edge in securing a job. Most importantly, stay determined, and don’t let the unsuccessful applications diminish your drive to succeed. I personally had been through numerous interviews and selections before I successfully joined and got a placement with the Wings Alliance APC.” Michael has recently been placed with Flybe, and as of September 2016, is awaiting a start date from the airline’s training department.

As well as the agreement with Flybe, Wings Alliance also has an agreement in principle with Monarch, though the airline isn’t currently recruiting, and there’s an agreement with LoganAir too. Rod explained that there are a couple of other airlines in talks, which the Alliance hopes to announce over the next couple of months.

Within a trade alliance, there’s inevitably going to be competition – for instance, there may be two or three ground school providers, not all that far apart geographically, who will be competing for the same pilot’s custom. However, Rod explained that, so far, the competition factor hasn’t been a problem.

“The response to the alliance from member schools has been very heart-warming. It’s not just about placing students within airlines, it is a trade association, and one of our stated aims is to improve standards. Obviously when you’re talking to a diverse range of flight schools who are, in some respects, competitors, you may expect to see some reluctance when we might say to them that we all need to pull our socks up and get better, but I’ve been very pleased to find the response has been lots of ideas on how we can improve best practices and we’ve seen really good cooperation between schools so far. In the areas of assessment and standardisation, we’ve made some good progress.”

“Looking forward, there’s potentially quite a revolution coming for the flight schools”

The issue of sharing knowledge, and improving standards across the board, is an important one for Rod. “Looking forward, there’s potentially quite a revolution coming for the flight schools,” he explains. “EASA is finally looking at the Theoretical Knowledge syllabus learning objectives, and one of the things it’s introducing is a new subject, to be called KSA (Knowledge, Skills, Attitude), following on from work done in the airlines and in type rating training many decades ago, looking at non-technical skills in pilots and saying that handling the aeroplane is only one part of the job. Being able to lead other people, communicate effectively, and all of those non-technical skills are as important.

“By forcing (the syllabus) on flight schools, I think it’s a very good thing. The way we get there is very much up for debate at the moment, but the end result can only be a positive. Having a pilot who’s an effective communicator, even in single-pilot operations, is very important. And, as most people go through commercial training are going to end up in multi-crew operations, incorporating these ideas from the very beginning is only logical.”

Where this training knowledge may once have taken a while to filter down to smaller schools, Rod explains that a big advantage of Wings Alliance is the mechanism to help member schools make the transition.

“We have one foot in the airline door and one foot in the flight training camp, so we’re able to use the expertise within our organisation. All of the people running the APC are airline pilots, and the schools can use their skills and expertise to share knowledge flight instructors in member schools, which, for us, is as important as the APC placing people in the airlines. The overriding thing is that all of our members are small organisations. And small organisations on their own don’t carry as much weight and don’t necessarily have the resource to deal with some of these bigger issues. Together, we have that influence.” For more information visit www.wingsalliance.eu

Wings Alliance will be at Pilot Careers Live London on 5 November, at the Sofitel Hotel, Terminal 5 London Heathrow. Tickets available at pilotcareernews.com/live/london/