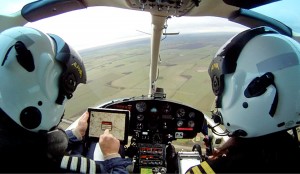 Helicentre Aviation’s new East Midlands heliport complex which has been built at Leicester Airport has officially opened. The £500,000 expansion of Helicentre Aviation’s operations includes a brand new hangar, offices and ground training facilities, an apron and six helipads and the company also provides Jet A1 and AvGas refuelling services, handling and hangarage to visiting helicopters.

The development coincides with the award of an eight year contract to survey gas pipelines for National Grid, and continued expansion of their training academy has brought about a number of new positions to add to the existing 20-strong workforce.

“This is a very significant expansion,” said Captain Christopher Line, Chairman of Helicentre Aviation. “It brings us exciting new facilities while the National Grid contract takes turnover to a different level and we are now able to tender for bigger contracts.”

The company has been operating for more than 12 years, initially at Coventry Airport before in 2009 switching to Leicester. Captain Line said “The move was a great success, bringing new opportunities and a far better, and more cost-effective training environment for student pilots. Now we are building on that for what we are convinced will be an exciting future.”

Whilst the complex has already become operational, an open day to celebrate the official opening will be held in Spring 2014 after the opening ceremony which was scheduled to take place this month was postponed due to adverse weather. Invitations will be sent out to industry early next year.

In 2014 Helicentre Aviation will also be awarding around £100,000 worth of training scholarships for professional pilots with the strong potential to gain employment with the company for the successful candidates. Potential applicants can register their interest by visiting www.helicopterschoarships.com.