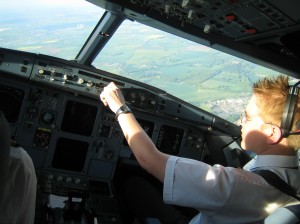 Those interested in applying for the current ‘Monarch Wings’ intake must do so by 30 June 2013, although CTC reserves the right to close this window before that date, should application numbers exceed the requirement.

Kevin George Managing Director of Monarch Airlines commented, “Our first group of ‘Monarch Wings’ MPL graduates will begin flying with us very soon and we have already seen an impressive increase in their capacity and skill. We have enjoyed monitoring their progress and working alongside the CTC team to support their development throughout their training. We have a further group in training with CTC right now and we are delighted to be able to offer even more opportunities for our next generation of pilots to benefit from the same high quality training.”

Speaking on behalf of CTC Aviation, Lee Woodward, CTC’s Director of Business Development, said, “Monarch Airlines has become an extremely popular airline amongst our ‘CTC Wings’ pilot graduates – interest levels are always high when we are recruiting our qualified ‘CTC Wings’ Cadets graduates for Monarch. Whilst this particular opportunity will involve pre-selection prior to commencement of training, Monarch is one of several airlines that remain committed to both pre-selection for MPL and supplementing their cadet requirement numbers by employing pilots who have graduated from our ‘CTC Wings’ integrated ME CPL/IR programme.”

Monarch Airlines will also be providing the speaker at the forthcoming “CTC Wings Careers Event” open day on Saturday 10 August 2013 at CTC’s Boeing and Airbus simulator centre in Southampton on the south coast of the United Kingdom. To register for the 10 August “CTC Wings Careers Event” visit and hear Captain Rob Parkin Brown – Monarch’s A320/321 and A330 Chief Instructor visit ctcwings.com.