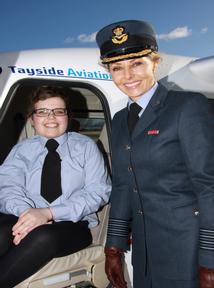 Rebecca, of 132 (North Berwick) Squadron of the Air Training Corps, was recently diagnosed with cancer, and despite being told it was terminal, aimed to raise money for the Children’s Hospice Association Scotland.

Creating a blog of her bucket list, Tayside Aviation today helped to get Rebecca airborne in Dundee, with Carol offering a surprise flight in her own aircraft too.

Carol is now calling on all members of the RAF, Army, Navy and Royal Marines and the general public to get behind Rebecca’s efforts to raise money for the hospice that has helped her, by logging onto her justgiving page.

Carol said, “I think her spirit is truly amazing. Rebecca is completely selfless and despite being given terrible news about her illness she has set to, dug in and is absolutely determined to make a difference.

Rebecca started out aiming to raise £5k for her hospice – the Children’s Hospice Association Scotland but the total raised already stands at more than £15,000. During her visit to Tayside Aviation, Rebecca also received two top awards, a Special Commendation from Commandant Air Cadets and the Andy Swierczek Award for her determination. Carol also presented her with a limited edition print signed by the RAF Red Arrows.

Rebecca was also given a tour of the facilities and a three-aircraft flypast by the Tayside Aviation Grob Formation Team.

Her Commanding Officer Flt Lt Iain Edmans said: “Rebecca puts in lots of time for community events, which has resulted in a Saltire Award for completing over 100 hours of volunteering and is very committed to the squadron. She was a member of the Squadron team which won the Wing Swimming Gala in 2013 and has run 10k event to raise funds for the Sick Kids Friends’ Foundation. The latter supports the work of the Royal Hospital for Sick Children, Edinburgh where her younger brother has been a patient for over 10 years.

“Her news has been a shock to everyone but typical of her character, just after receiving her bad news that her illness was terminal, she immediately decided to raise money for CHAS, the Children’s Hospice Association Scotland. Becky is the sort of cadet who stands outside all weekend doing fund raising for the Royal British Legion poppy collection and she is a stalwart – a real trooper. She had chemo and radiotherapy and was even doing her air cadet syllabus work in her hospital bed last year – she was promoted whilst in hospital. “

Rebecca says on her justgiving page: “I am raising money for CHAS for Children’s Hospice Association Scotland, (CHAS) because they have helped me and my family.

“Unfortunately I’ve recently been told my case is terminal. Although this news isn’t the best it has encouraged me to raise money for CHAS which have done lots for me in the past so therefore wanted to return the favour by doing some fundraising for them.

“Even though I have cancer, there is lots I still want to achieve in my life. Time left to have fun, make plans and to live. I hope to raise at least £5,000 by having coffee mornings, dances and dares (including bungee jumping and skydiving!).”

Rebecca has already raised £15,000 and it’s increasing daily but she hopes to raise this further, so that CHAS can continue to help young people with life-shortening conditions.