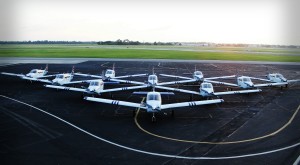 The agreement with aircraft manufacturer Piper includes firm orders for 22 single-engine Archer TX training airplanes and 12 twin-engine trainers, as well as parts and service. Deliveries have now begun with 27 of the new aircraft going to CAE Oxford Aviation Academy in Phoenix, United States, and seven being sent later in the year to CAE Oxford Aviation Academy in Oxford, UK.

The aircraft are the first ab initio aircraft in the world to be factory-equipped with CAE-designed flight data analysis and cockpit video recording systems. These systems record data, audio and video and are important new additions to CAE’s Safety Management System (SMS). The recorded information will be replayed through the CAE Flightscape Insight flight data analysis software. It will enable students to debrief immediately after a flight using flight animation with synchronised audio/video and will allow CAE to gather statistical trends for longer term safety and performance benefits. This initiative provides for more consistent high-level training with objective flight animations and metrics to enhance the overall learning experience.