Boeing and JetBlue Airways are supporting a project to develop a regional hybrid-electric airliner for the early 2020s capable of flying 700 miles at launch.

Zunum Aero is developing the 10-50 seat aircraft to offer a frequent service to USA’s network of over 5,000 under-utilised regional and General Aviation airports.

“The shift of the industry to large aircraft and long ranges driven by gas turbines has concentrated almost all air traffic to just two percent of our airports, creating a massive transport gap over regional distances where there is no high-speed alternative.

“As a result, door-to-door times for most journeys are no better than they were 50 years ago,” said Ashish Kumar, CEO and founder, Zunum Aero. “Hybrid propulsion is an industry-changing solution, enabling mid-sized aircraft on regional routes to have better cost efficiencies than airliners.”

Zunum cites these examples: Passengers can expect to travel from regional airports in the Boston area to Washington, DC for half the fare and in half the time it takes today door-to-door. For those on the West Coast, Silicon Valley to the LA area drops to two and a half hours door-to-door, from over five hours today, or to Lake Tahoe in just two hours at a fraction of today’s cost. 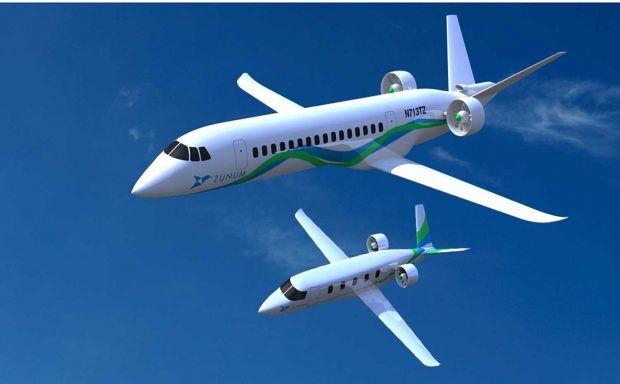 Zunum’s hybrid-electric regional airliners will be 10-50 seats and used for short hops up to 700 miles.

Additional estimates of impact include:

Zunum Aero is three years into development with an experienced, multidisciplinary team across aircraft, aircraft engines and electric vehicle disciplines, including leaders of two flying electric vehicle programs and the leader of a NASA-funded program on drives for electric airliners.

In addition to backing by Boeing through its Boeing HorizonX innovation cell and JetBlue Technology Ventures, Zunum has a long-term partnership with the Center for Power Optimization of Electro-Thermal Systems, an NSF Engineering Research Center at the University of Illinois, and a network of collaborators across leading Universities and government labs.

“Boeing HorizonX is investing in Zunum because we feel its technology development is leading this emerging and exciting hybrid-electric market space. This technology and customer approach has the potential to transform the market for small, short-haul aircraft that can use smaller regional airports,” said Steve Nordlund, Vice President, Boeing HorizonX.

The demand for pilots shows no sign of easing according to the latest 20-year forecast. A total of 804,000 new commercial aviation pilots will be need...