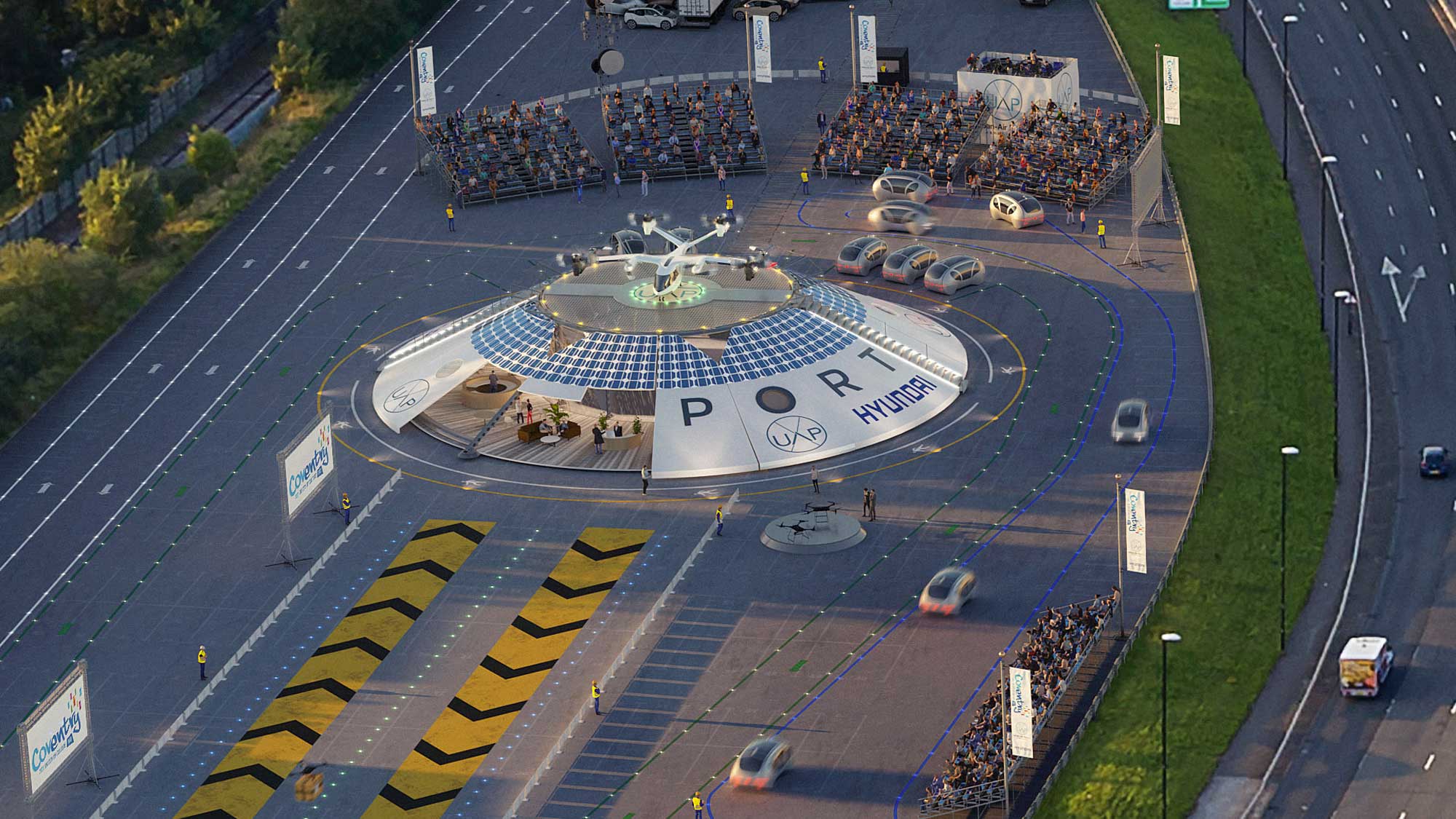 Car maker Hyundai is moving into the urban air mobility – air taxis – sector. Here’s an artist’s impression of one landing at the proposed site in Coventry

The world’s first fully-operational hub for future electric vertical take-off and landing (eVTOL) aircraft – such as cargo drones and air taxis – is to be launched in Coventry later this year.

Urban Air Port Air-One is a winner in the UK government’s Future Flight Challenge to develop aviation infrastructure and systems that enable the next generation of electric and autonomous air vehicles.

It’s a shot in the arm for the beleagured aviation industry and comes on the same day as the Govt also announced £84m funding for three other projects to accelerate hydrogen as an aviation fuel.

Urban air mobility is predicted to be a huge industry in the near-future, opening up a whole new area of aviation – and large numbers of jobs.

NASA predicts that urban-air mobility in the US alone could be worth up to $500 billion USD (£375 billion) in the near-term and states that a significant barrier to market growth is the lack of infrastructure.

The Urban Air Mobility Division of Hyundai Motor Group has chosen Urban Air Port as its priority infrastructure partner to support the global growth of this new sector. The South Korean company plans to create its own eVTOL aircraft and support the broader urban air mobility eco-system. 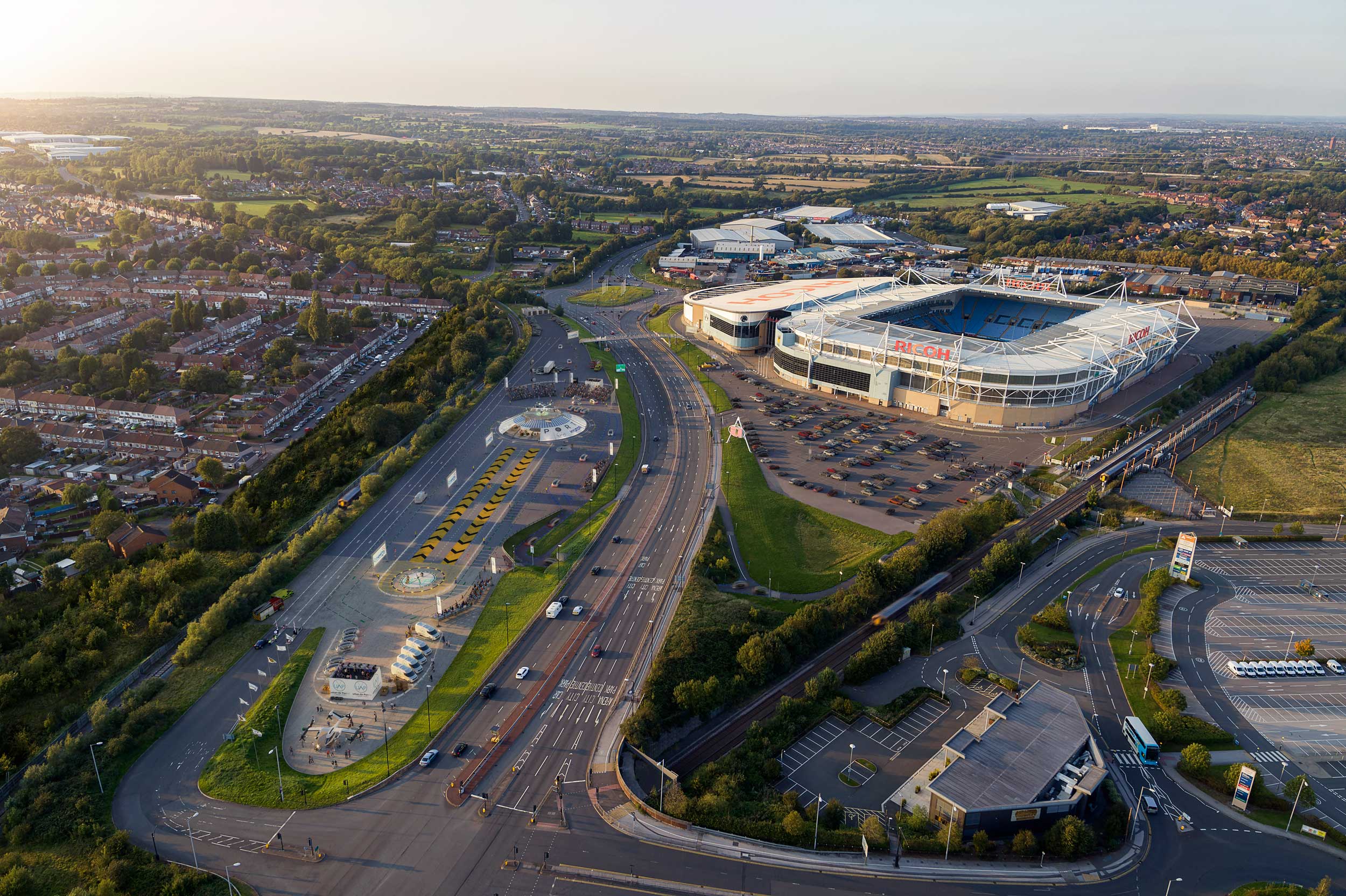 Visual representation of the Air-One site with a Hyundai eVTOL in the centre of Coventry. Images: © Urban Air Port Ltd

“Over a hundred years ago, the world’s first commercial flight took off, creating the modern connected world. Urban Air Port® will improve connectivity across our cities, boost productivity and help the UK to take the lead in a whole new clean global economy.”

The Urban Air Port is 60% smaller than a traditional heliport and using innovative construction, the sites can be installed in a matter of days, emit net zero carbon emissions and can be operated completely off-grid.

Gary Cutts, UK Research and Innovation Future Flight Challenge Director, said, “Urban Air Port has the potential to revolutionise cities across the world, making them more connected, cleaner and accelerating our green economic recovery. This project epitomises the purpose of the Future Flight Challenge fund – it is innovation at its finest – and will help to position the UK at the vanguard of electric urban air mobility.”

Coventry was chosen for the first site due to its important location in the heart of the UK and because it is a historic hub for the automobile and aerospace industry, with a pool of people and skills that can support the manufacturing industries of the future.

The city’s unique location also provides easy access to most parts of the country. In December 2020, Coventry was named the best UK town for electric cars. Air-One will be unveiled during Coventry’s UK city of culture celebrations in 2021 and continue to form part of the Commonwealth Games in 2022. Coventry University is also a research partner.

The impact of the Covid-19 crisis on aviation can be seen in the latest figures from London Heathrow Airport. In March, passenger numbers shrunk by 52...

London Heathrow is stepping up its cargo capabilities to maximise the use of the airport’s quieter schedule so that the aviation industry can play i...