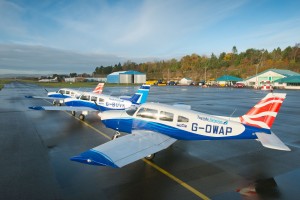 Tayside Aviation has recently increased its training fleet to include another three PA-28 Warriors. Two of the three are ex-British Airways flying school, hence the distinct similarity of the BA tail fins. Tayside Aviation operates the commercial training and RAF flying scholarships from Dundee Airport and they also operate the flying school at Fife Airport, operating 19 aircraft overall.

Dundee Airport has seen its busiest summer with over 5,250 movements recorded per month and 95% of these are Tayside’s training movements. Over the summer Tayside has flown over 60 sorties per day making it one of the busiest schools in the UK. Bucking the trend, Tayside say this was largely due to good weather and two PPL summer schools offering a Private Pilot Licence in a six week block.

Additionally Tayside trained the Army Air Corps who all gained a full EASA PPL before going on to fly helicopters including the Apache and Wildcat.

Managing Director, Jim Watt said, “We desperately needed some more aircraft and this brings our Warrior fleet to nine. G-OWAP and G-EGTN have had a makeover to make them look more modern but due to the interest from many enthusiasts we have decided to keep the distinctive red tails for now. It has been an incredible summer and our staff has done an amazing job delivering the quality required for the RAF and Army. We were flying from 6.00 am to 9.00pm on some days and peaked in July with 5,980 movements. It was all hands on deck and I am privileged to have some of the best flying instructors around, it was an amazing team effort.” 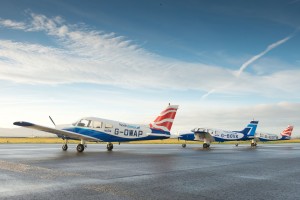