Six pilots to earn their wings with Scotland’s Loganair 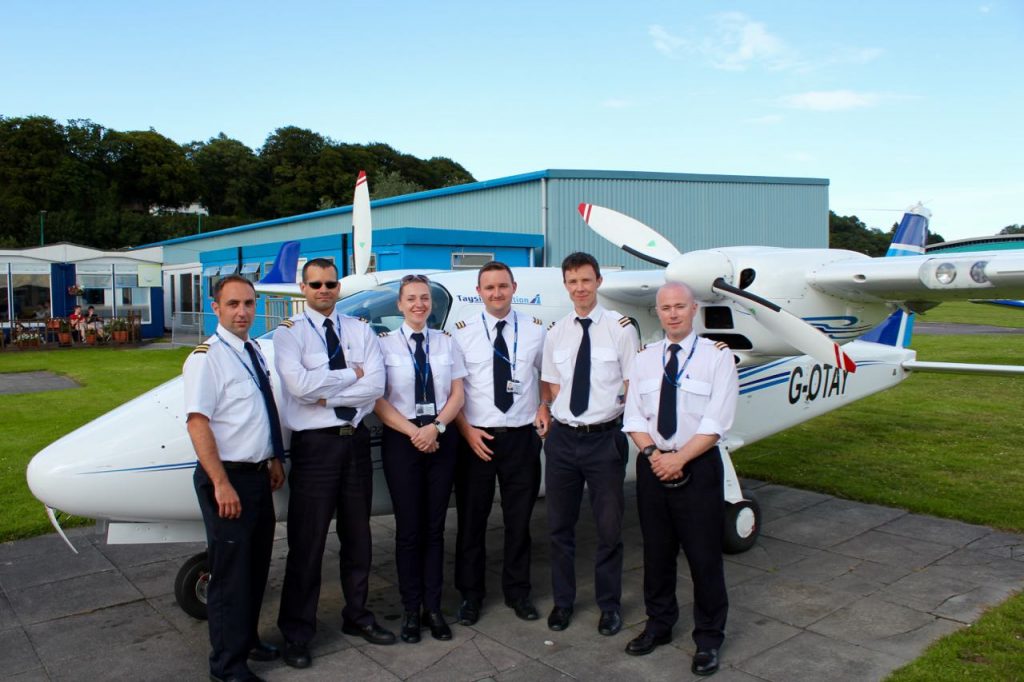 A partnership programme between Flybe franchise partner Loganair and Tayside Aviation will see six pilots take to the skies in August.

Each graduate has been recruited by Loganair through the airline’s partnership with the Dundee Airport-based Tayside Aviation.

This latest intake from the partnership will see the recruits work across four of Loganair’s five aircraft types including both Saab models – the 34-seat 340 and the 50-seat 2000 – as well as the 31-seat Dornier 328. And for the first time in the history of the partnership, a Tayside Aviation pilot will be trained by Loganair to operate the Twin Otter aircraft – famous for its iconic beach landing at Barra.

Four of the recruits are Scottish, one is from Lithuania and the other is from Reunion Island, located east of Madagascar in the Indian Ocean. They come from varied employment backgrounds and feature amongst their ranks a former professional footballer, a kitchen fitter, a coffee shop manager, a property developer and a former professional jockey, who was also a freelance farrier and blacksmith.

Andy Thornton, Loganair director of flight operations, said: “Our relationship with Tayside Aviation has been a fruitful one over the years and I’m pleased to see that this partnership continues to thrive.

“I am a graduate of Tayside Aviation myself, so I know these latest recruits already possess the necessary skills and experience to make it as pilots with the airline. Our flight crews operate a unique fleet of aircraft from eight-seat Islanders to 50-seat Saab 2000s, and they frequently work in challenging weather conditions across the length and breadth of Scotland.

“Quite rightly, they need to be the best at what they do because passenger safety is, and always will be, of paramount importance to Loganair and its flight crews.

“We currently employ 182 pilots, and many of our first officers and captains have come through our partnership with Tayside Aviation, so I’m looking forward to watching the careers of our latest recruits flourish with Loganair.”

The partnership between Loganair and Tayside Aviation was formalised in 2010, but the relationship between the companies goes back decades. To date more than 50 Tayside Aviation graduates have worked as both first officers and captains with the airline. Each of the six recruits, who were already fully-qualified pilots when they joined the airline, will spend the next three months at Loganair’s new training facility in Glasgow. During this time they will go through the airline’s intensive training programme, which includes class-based theory, a two-week simulator programme and numerous flights with Loganair’s team of training captains.

The recruits will also spend time training with Loganair fleet specialists in Sweden and Holland before a final test flight with a Loganair examiner at the end of their training.