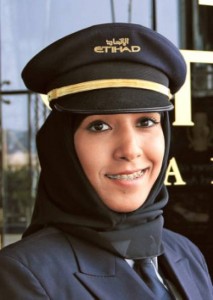 Captain Salma Al Beloushi is the First Emirati woman pilot, and one of many women forming the face of the modern UAE. It was a proud moment for all Emiratis when Salma Al Beloushi operated her first flight as a first officer for Etihad Airways from Abu Dhabi to Athens on June 9, 2011.

It took years of dedication and hard work for Salma, who initially enrolled in a nursing academy to train as a nurse, to become the first Emirati female A320 co-pilot. “I saw an advertisement in a local newspaper from Etihad Airways and decided to apply for it, although I knew nothing about flying.”

Encouraged by her mother and other family members, Salma joined Etihad in 2007 as part of the airline’s second group of cadet pilots.