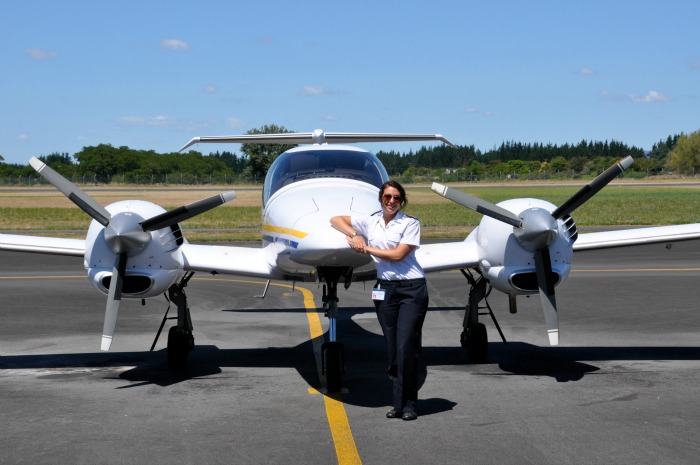 Chloë is a BA Future Pilot Programme cadet with CTC Aviation. She shares her experiences of pilot training and explains more about her path to an airline pilot career

It was dramatically obvious that from a very young age a conventional office job was not for me; I had a yearning to explore and meet people from all across the globe. The earliest I can remember being in reverence of the aviation industry was when I used to meet my Granddad in the Air Traffic Control Tower at London Heathrow. Watching these colossal machines take off into the sky was awe inspiring and from then on I knew – whether it was as an Air Traffic Controller, an Engineer or a Pilot – that this was the industry for me.

I joined the Air Training Corps at the age of 13 and the first thing I did was visit RAF Benson for an air experience flight. I got to ‘take control’ of the aircraft and since then, I have never looked back. The feeling of being in the air in control of an aircraft is exhilarating and left me with the ambition to spend my life perfecting my own flying skills. Whilst there, I met the most inspiring man, an ex-British Airways Captain – Captain Tom Pearce-Carr – who told me remarkable stories about all the different places he had seen across his career. Whilst with the ATC I was lucky enough to be awarded with scholarships from both the Air Cadets and the Air League, enabling me to conduct my first solo flight at 16, which reassured me that a career as a pilot was what I really wanted to pursue.

In October 2006 I started a Physics degree at Reading University, staying on for a fourth year to complete a Masters in 2010. Maths and Physics were always subjects I was hugely interested in at school and I knew that this education would set me in good stead for the examinations ahead. After graduating, I applied to the CTC Wings programme and found myself being selected as one of the lucky few! My course started in autumn 2010 and I was eager to get going. However, with only a few weeks until the course commenced, and when looking further into the finances, it was obvious that even with the help of all of my family we were not able to guarantee the loan which meant that I would have to forfeit my place on the course.

This was quite a gutting time; however it wasn’t going to stop me from achieving my dream. I joined a recruitment company in Oxford and for twelve months I worked early mornings to late at night to save enough for a Modular course. In summer 2011, I learned that British Airways was launching the Future Pilot Programme (FPP). This was the chance that I had been waiting for! BA offers a guarantee to help raise funds for the course and one of its preferred Flight Training Organisation was in fact CTC Aviation. I applied straight away and was interviewed alongside many others with the same aspiration. In December 2011 I was given the incredible news of my place on the FPP training with CTC with a conditional offer of employment for a First Officer position with British Airways on successful completion of the course.

I am now sat writing this in Clearways (one of CTC’s accommodation centres) in New Zealand. There’s amazing clear skies for miles and aeroplanes flying overhead at all times of the day. My flight training started here in January 2013 after completing five months of intensive ground school training in Nursling, UK. It is tough. It is not a career for those without a deep buried desire. At times it is a struggle but with the end goal of a right hand seat with the best airline in the world, constant mentoring, training by a renowned FTO and amazing peer support, it’s definitely worth it.

If it wasn’t for the help of CTC Aviation, British Airways, the Air Training Corps and Captain Tom Pearce-Carr, I would not be where I am today. Training to be an airline pilot is hard and a certain level of intelligence is needed, but my advice to all those that may feel discouraged upon hearing this: we’re all normal, yet diligent and motivated people. But together we share an innate aspiration to fly. As proven in my situation, giving up is not an option. Research the different options you can take, learn about the scholarships on offer and take advantage of them. If you’re reading this and share my love for the aviation industry then I wish you all the best in your careers, GOOD LUCK!