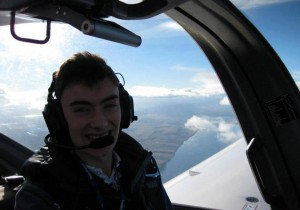 Tom Hall, 19, has had a passion for aviation since he can remember. Now training for a Commercial Pilots Licence with Tayside Aviation, Tom tells the story of how his passion and enthusiasm for a pilot career has already taken him further than he could have dreamed…

I have always been interested in aircraft and flying for so long as I can recall, with a particular fascination of Concorde. I was even lucky enough to get the day of school to witness Concorde’s last ever commercial flight back in October 2003 as well as getting a pre-public viewing of Concorde G-BOAA at the Museum of Flight in East Fortune.

In 2005, my mum and dad treated me to a trial flight in a Cessna 152 at Tayside Aviation. From that moment on I knew without doubt my ambition was to become a commercial pilot. Although it was not possible to log my hours at this stage, I managed to fly once every few months, up until the age of 14 where I could start logging my hours towards my Private Pilots Licence.

Due to the instruction at Tayside Aviation and favourable weather, in December 2010, I managed to fly solo on my 16th birthday. After a further 35 hours of training I was ready to take my skills test, fortunately I passed first time and I could now look forward to taking passengers up flying with me. It was alleged that I was the youngest pilot in Scotland at the time and the Scottish Press took interest in the story.

Having left school in sixth year, I decided not to go to university but opted to study for my ATPL exams, 14 exams covering subjects such as principles of flight, meteorology and so on. The subjects are studied in much more depth than the PPL exams and it took me around one year to complete with around six hours of study per day, every day. It was hard work and although the course may be more theoretical than practical, it was however interesting studying and gaining more general knowledge.

Furthermore, while studying, I was able to build up my flying experience as I needed to have 100 hours Pilot in Command time before I could start my Commercial Pilots Licence. I really enjoyed my hour building as I visited many airfields in Scotland and England experiencing different ATC and aerodrome procedures. 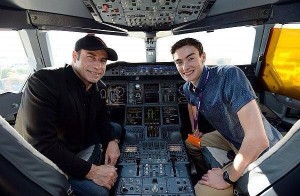 In November 2013, a PR company in London contacted me, after reading my story in the newspapers the previous year, asking if I would be interested in doing some publicity work for Qantas with a ‘famous pilot’. I immediately said yes! After enquiring who the ‘famous pilot’ would be, I was told John Travolta!

Just five days after being asked if I would be wiling to film with John Travolta, I found myself on an Airbus flying down to London Heathrow Airport. I was then taken up the control tower, and while speaking with one of the controllers I remember a voice saying, “Hey Tom, it’s John, give me high five!” We spoke for ages about our interest of aircraft and it was clear we both shared the same passion and enthusiasm.

I will always remember when John and I were looking out over the apron at London Heathrow and there were two Qantas A380s being loaded. John then asked me if I had ever flown on the A380 to which I replied, “No never.” John then said, “Well why don’t I pay for you to go to Australia!” I was in total shock, he explained to the film crew how unusual it was nowadays to find young people with so much enthusiasm and interest and it was just what aviation needed. Initially I though it was a wind-up; however I was reassured it was true.

John and I then received a private tour around one of the Qantas A380s with a training Captain who explained the various flight controls and systems the Airbus A380 incorporates. When it seemed my day couldn’t get any better, the training Captain said he would arrange for me to receive a trip around the Qantas HQ and for me to fly the A380 Simulator while I was in Sydney.

In March 2014, I set off on my journey to Australia, I could not wait to experience flying on-board the A380. The immense size, power and design of the aircraft was incredible. There was even an in-flight option to follow the aircraft’s flight path, altitude and heading. The cabin crew showed me around the aircraft in flight and explained their roles and duties involved. 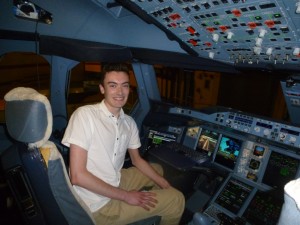 Sydney was incredible and I managed to visit many tourist attractions, however the best part was certainly my trip around Qantas HQ. Firstly I got to practise an evacuation on a 747 which was filling with smoke and about to ditch in the ocean. After that, I had the chance to fly the A380 simulator – it was incredible! I was able to take off from Sydney then do some general handling, emergency procedures before coming back for a few circuits. Finally I was lucky enough to get a tour around the Flight Operations Centre which monitor the whole Qantas fleet 24 hours a day.

When I returned to the UK, I started my Commercial Pilots Licence with Tayside Aviation, I am currently a few hours into the course and thoroughly enjoying it. Once I complete the course, I am hoping to do the Flight Instructors Course as I’d love to work as an instructor first and share my enthusiasm with others.

Dundee-born Gavin Ritchie, aged 24, will start a career as an airline pilot with Flybe on 1 November, one of the first batch of students to lan...