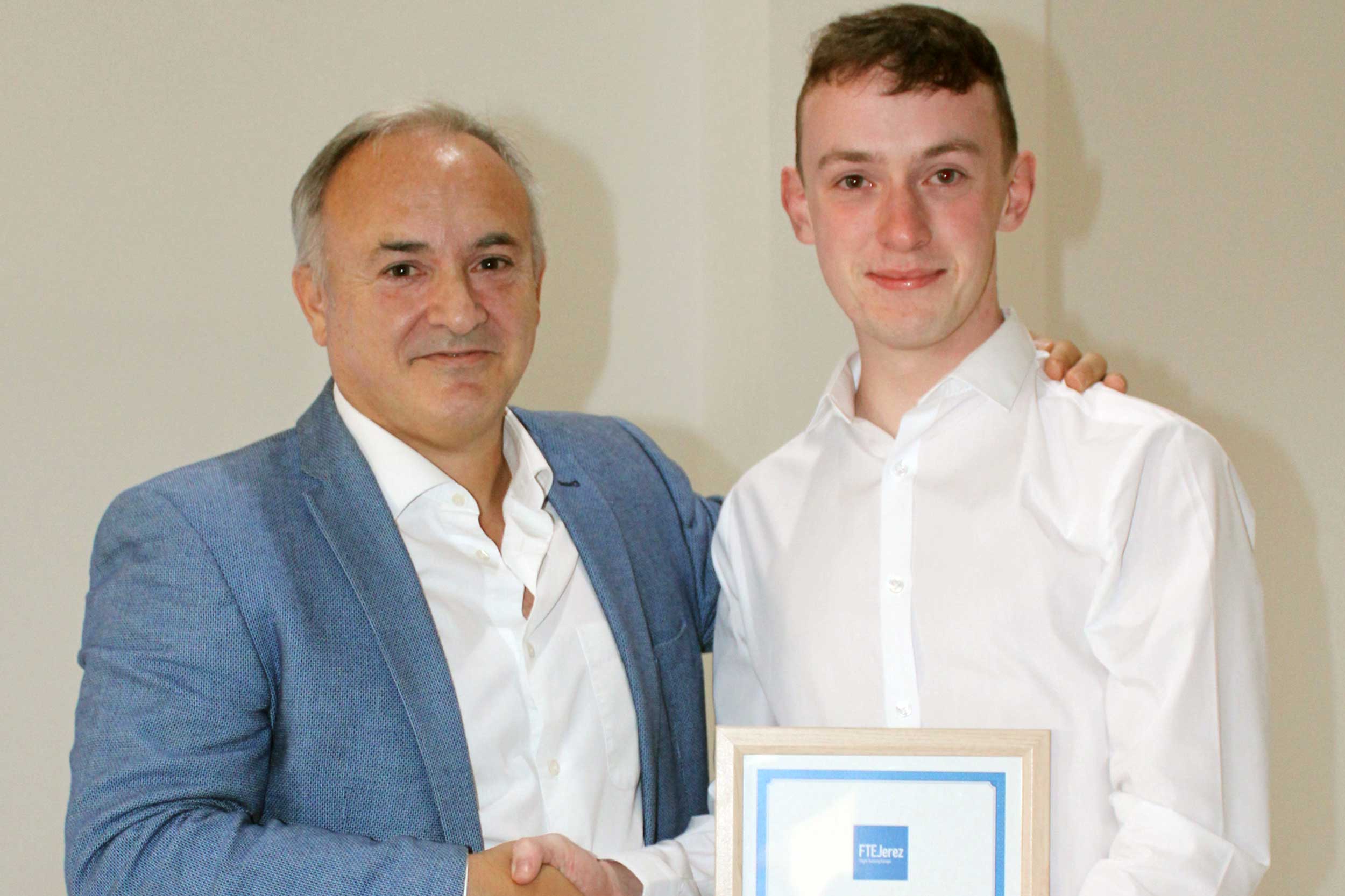 Having recently won a fully funded ATPL scholarship with FTEJerez, pilot Stephen Daly talks to Yayeri van Baarsen about when his interest in aviation started, and forward to his career ambitions…

As a boy, Stephen was already more enthusiastic about the flight than the actual vacation. “When we arrived at the Algarve, I spent most of the holiday eagerly anticipating the moment we would board again. I’d intrusively stare into the flight-deck, dreaming one day it might be possible to operate such an amazing machine.”

Still, becoming a pilot wasn’t the logical career choice for the now 21-year-old. Growing up in Kilmallock, a small town in south-west Ireland, he was the youngest of six siblings. Since no-one in his family was involved in aviation, finding someone to emulate was difficult.

At the age of 13, having finally saved up enough for his first flight experience, he realised no other profession would fulfil him the way flying could. From that moment, any income Stephen gained was measured in flying time: months of washing dishes and doing chores equalled to about 40 minutes of flying… At that time, becoming a pilot seemed unattainable. 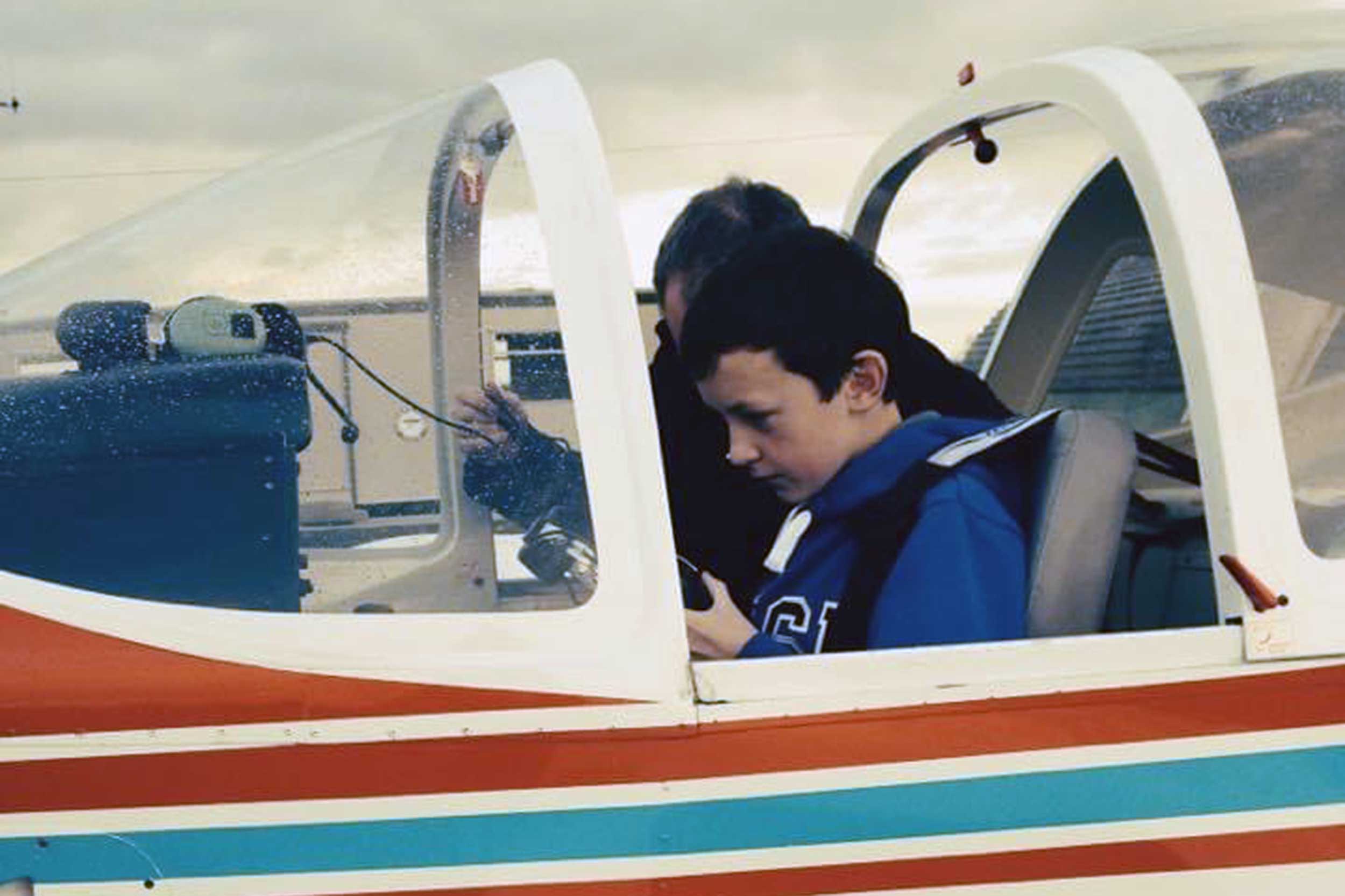 However, young Stephen continued to observe any piece of aviation-related information he could get his hands on. All his school projects consisted of some variation on an aviation theme, which eventually led to his decision to study Aeronautical Engineering. Getting into the industry was tough, though. Stephen recalls applying to 40 different companies, asking for work experience at the age of 15, just to get one step closer to the flight deck.

“I received a ‘No’ from all of them…” Eventually, in 2016, Jane Magill of the Shannon Aviation Museum took him under his wing. “I’m hugely indebted to Jane. Through her, I got to meet other amazing people in the industry.”

In 2017, Stephen found out about scholarships via an article in FLYER.

“I remember eating lunch at Cork Airport when reading about The Honourable Company Of Air Pilots’ Gliding Scholarships. I immediately bookmarked it!” He won this scholarship, as well as its PPL Scholarship, which allowed him to obtain his pilot licence in 2018.

Still, he’s quick to point out that: “You only see other people’s successes, not their failures nor the hours they’ve put in.” Stephen remembers spending six months on another application, before receiving a rejection at the first selection phase. “It was disheartening, but I knew that if I’d stop, my chances of becoming a pilot were zero, whereas if I’d persist, there’d still be a chance.”

Any scholarship secrets he can pass on? “Learn from your failures and try to be as detail-oriented as possible throughout the entire application process. Before pressing send, I always look back to see if there’s anything I’ve omitted.”

Currently, Stephen has 75 flying hours and just finished a work placement at MTU Maintenance Lease Services in Amsterdam, The Netherlands.

Stephen added, “When I’m not flying, I’m doing everything in my power to gain a broader view of the aviation industry.” 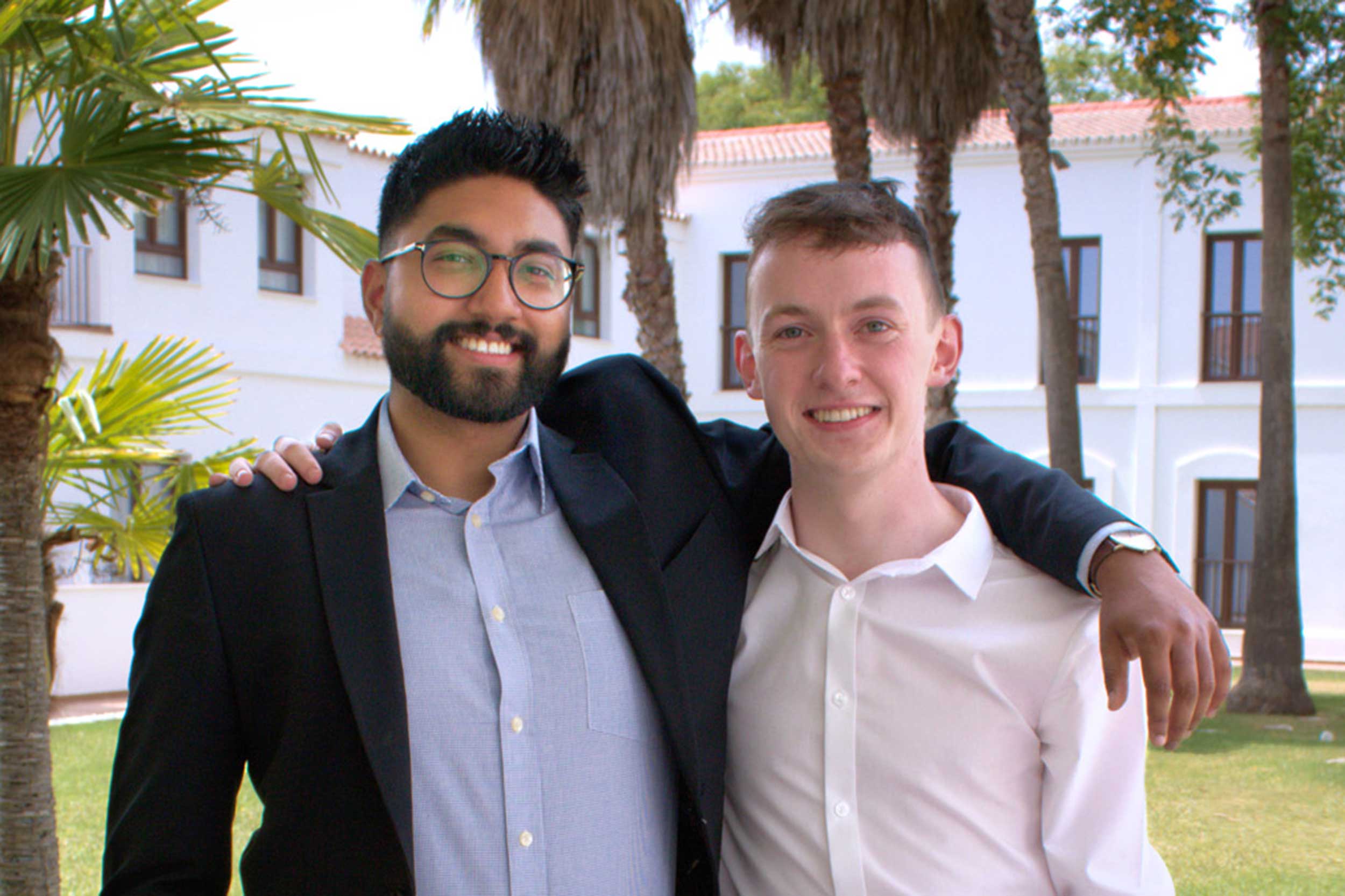 Stephen was one of two scholarship winners. He’s pictured here with the other winner, Fahim Ahmed, from Edinburgh, Scotland

Winning the fully funded ATPL scholarship with FTEJerez was a dream come true for the ambitious pilot.

“Having been uni-dimensionally focused on this goal for my whole life, it still seems surreal.”

From being one of the 2,000 initial applicants in 2021, Stephen made it all the way through the final selection in June 2022. “The scholarship consumed the last seven months of my life. It was literally the first thing on my mind when I got up and the last thing I thought about before I went to sleep.”

Although proud of his accomplishments, he quickly points out he couldn’t have done it alone. “I’m so grateful to my family, friends and mentors, it’s as much their success as it’s mine.”

To prepare for the interview stage, Stephen consulted friends who’d already been accepted as airline cadets. They’d ask him ‘every single horrible question imaginable’, while he focused on keeping his composure, and considering how his answers would relate to qualities needed on the flight deck. 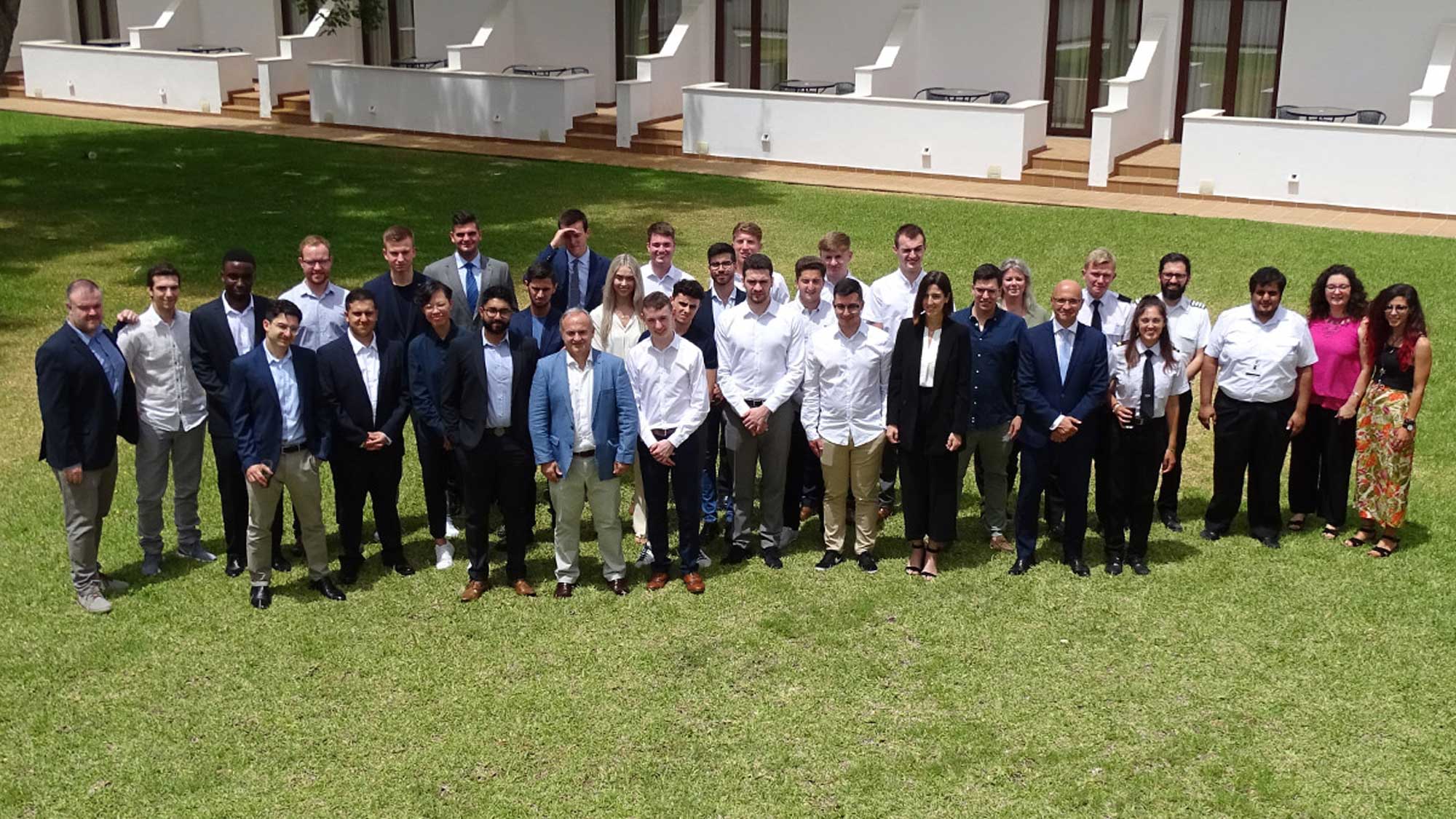 Stephen will start his new life in Spain, training for the ATPL with FTEJerez, on 18 July

The ATPL course will begin on July 18, when Stephen will start his new life in Spain surrounded by aviation on the FTE campus. He chose FTEJerez because of its level of excellence.

He added, “It exceeds industry expectations, with its ATPL results being significantly higher than the global standard.”

He is looking forward most to the multi-engine phase of training. “I imagine it being a step-up in terms of workload management from what I’m previously used to flying!”

Ideally, in two years, Stephen will have obtained his fATPL and be enrolled in a Type Rating Course with an airline. “Being aware of the highly competitive job market, I’d love to work with any operator. That said, nothing would fill me with more pride than flying the shamrock with Aer Lingus.”

He plans to accumulate as many flying hours as possible, and in five years’ time be well on the way to a command position. Stephen’s ultimate career goal is becoming a long-haul line training captain, in order to ‘give back what I’ve been so fortunate to receive’ – as well as gaining a deeper understanding of how airlines operate beyond flying.

He encourages all aspiring pilots to become a member of The Honourable Company Of Air Pilots.

“Find mentors and ask airline pilots how they got into this position. Most will happily give you advice, but if you don’t ask, no-one knows you need help.”

Anyone starting in aviation, he adds, must have relentless determination, “If you get to the point in pursuing a goal where any rational person would stop, and you keep going, you know you’re on the right path.”

“If I stopped asking after hearing ‘No’ forty times, I wouldn’t have been where I am now!”

L3Harris is offering a part-scholarship for new pilot cadets who enrol before 31 December 2021.