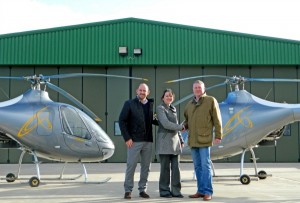 Helicentre Aviation has placed an order for the fifth Cabri G2 to join its training academy fleet at Leicester Airport.

The order was signed for this week at the company’s operating base where Andy Moorhouse of Cotswold Helicopter Centre, the UK Guimbal distributor, met with Helicentre Aviation directors Chris Line and Sarah Bowen.

“The Cabri G2 is an increasingly popular airframe which has become the preferred platform for our training academy students, and we are delighted to be the leading UK operator of such a great product” Sarah Bowen remarked. “With over 1,000 hours already scheduled over the coming months we have an obvious need for additional airframes and we look forward to welcoming to our growing fleet the new Cabris we have on order.”

Helicentre Aviation currently operates two Cabri G2 helicopters and flew a record 185 hours on type last month alone, ranging from ab initio PPL training to Flight Instructor courses. The company has flown over 1,300 Cabri fleet hours since it began operating the type in late 2012. Delivery of their third fleet addition is expected by late March, with the fourth arriving in August and the latest addition anticipated by January 2015.

Helicentre Aviation has recently invested over half a million pounds into a new heliport complex and is due to award five training scholarships in 2014 to help successful candidates fund their professional helicopter pilot training.