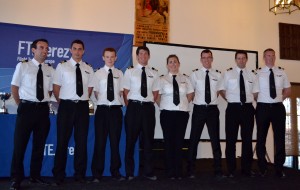 FTEJerez has celebrated 25 years of operations with the graduation of 25 Aer Lingus, British Airways and self-sponsored cadets. The college first started operations in Prestwick, Scotland in May 1988 as British Aerospace Flight Training.

Guest of honour at the gala event was Mr Christoph Mueller, Aer Lingus CEO, who was accompanied by the airline’s Chief Pilot, Captain Frank Lawless, its Manager of Training and Standards, Captain Malachy O’Curry, as well as Ms Susan Kavanagh, their Cadet Pilot Liaison Manager.

During his speech, Mr Mueller congratulated all the graduates and paid special tribute to the Aer Lingus cadets for having passed the airlines stringent selection process and having successfully completed the rigorous training course at FTEJerez. He also mentioned that the airline was looking forward to their return to Ireland where their services were required.

First Officer Matthew Chapman represented British Airways at the occasion that saw a further 6 of their cadets receiving their wings. The BA cadets are soon to return to the UK to commence their flying careers with BA prior to the next intake of BA Future Pilot Programme cadets that will be joining FTEJerez in November 2013.

FTEJerez would like to congratulate the graduates for having completed this demanding course and once again thank the airline representatives for joining us on this very special occasion.