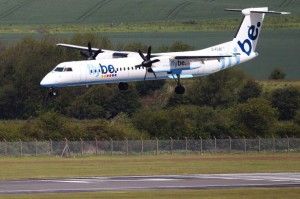 Following a cost-cutting plan released earlier this year, regional airline Flybe has announced the sale of all landing and departure slots at Gatwick Airport. 25 of these slots have been purchased by easyJet for £20m. easyJet will take over the slots from March 2014.

In reports, Flybe said it had decided to sell following a 102% increase in slot charges over the past five years by the airport’s owners.   The company stated, ‘It is the view of the board that the increase in charges, combined with the penalistic levels of Air Passenger Duty imposed on UK domestic airlines by successive Governments, have resulted in Flybe’s services to and from Gatwick becoming unsustainable in the long-term.’ The airline will continue to operate all of its seven domestic routes to Gatwick as normal, including its 19 flights a week from Inverness, until 29 March, 2014, and will make no changes to pricing, frequency or timings. Flybe serves a number of destinations directly from its Gatwick hub, including Belfast, the Isle of Man, Guernsey, Jersey, Newcastle and Inverness.

The airline also confirmed there will be no impact on the remaining five routes it currently operates from Inverness to Amsterdam, Belfast City, Birmingham, Jersey and Manchester airports.

The revised plans also include the delay of the delivery of 16 Embraer E175 aircraft by three to four years to help the airline return to profitability.