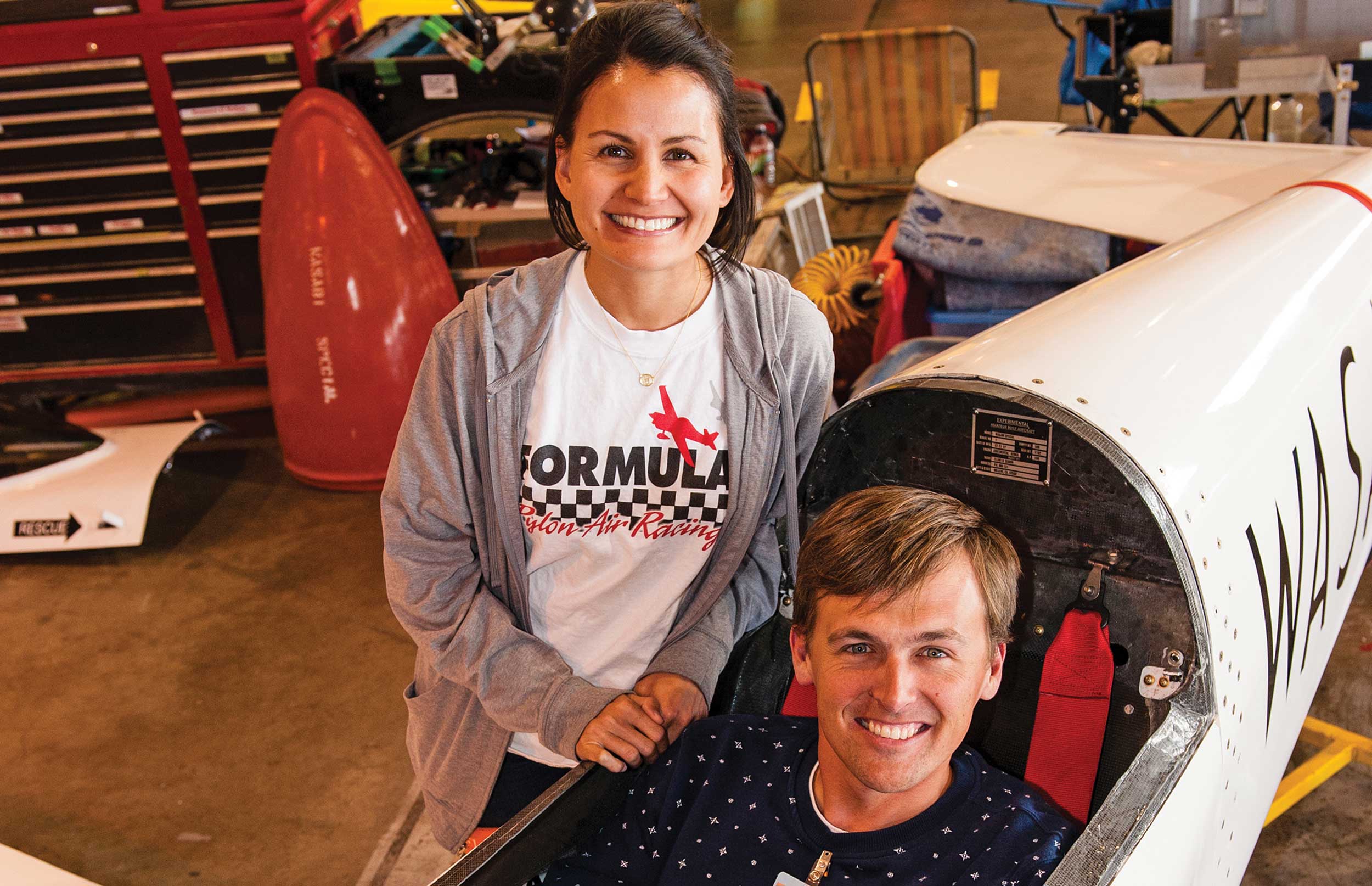 Elliot Seguin in the place he loves most – a cockpit – with his wife, Jennifer

How did you get into flying?
Growing up in Michigan, every Saturday my dad would take either me or one of my siblings to the airport, where we’d spend the entire day playing around the aircraft, catching frogs in the creek between the runway and the taxiway. If I wasn’t at the airport, I’d be listening to my Dad’s audio recordings of Reno Air Races, pretending to be there. I love aeroplanes and I’ve always wanted to know everything about them.

Tell us about your job…
It’s the freaking coolest job in the world. I’m an experimental test pilot and I currently fly the Mooney M10 prototype, a very fast carbon-composite aircraft. As a test pilot you’ve got a front row seat to the next big thing in aviation. What more could an aviation dork ask for?

Last winter, at Wasabi, we tested a Quickie we’d modified by replacing the propeller with a pair of jets. The programme was aggressive, the pace fast and we learned a ton. Over the summer, we returned a famous race plane to flying status for a customer and entered it at Reno, qualifying faster than it had ever gone before: 380mph.

The autumn was spent doing stall and departure testing on the Mooney prototype. Stall testing is some of the hairiest flying you can do. You’re flying maybe once a week. On the other days you review the data and prepare for that single flight in an Extra EA-300.

As a test pilot, I have an incredible opportunity to see how the pieces fit together. I work with guys like Mike Melvill, who have dedicated their entire lives to aviation – people who aren’t just a welder, machinist, designer or pilot, but all those things combined. That creates a huge pyramid of skills and knowledge, which takes tremendous time to develop. Working in R&D presents the opportunity to add more bricks to that pyramid, which is just incredible.

What training did you have?
Although the conventional path to become a test pilot is by going into the military and becoming a fighter pilot, I went the opposite way. I wanted to learn how things work and that curiosity eventually led me to the cockpit.

Most test pilots were flying F-16s but I went to engineering school in New York and that gave me a stronger technical and fundamental knowledge. However, I had the major disadvantage of not having flown a lot. To get hands-on experience, I designed and built my own aeroplane. Racing that at Reno is my equivalent to air combat.

What’s been your favourite flight?
The flights when I set four World Records in three days were pretty awesome. But even better was flying the aircraft that my wife and I designed and built together. We started the Wasabi Special by laying pieces of cardboard on the ground and eventually raced it at Reno.

My favourite flight was when we set a speed record flying it non-stop from Mojave to Oshkosh, along with five other aircraft – 1,500 miles in eleven hours. On arriving at Oshkosh, the absolute Mecca of aviation, we flew some passes during the airshow. Doing that with a group of close friends made it even more spectacular.

And your favourite airfield?
My home base, Mojave. The runways are long, the land is cheap, and the only people watching are the crash rescue guys. The whole point of moving to Mojave was to be a part of all that, so if I have to pick a favourite airport, it’s pretty hard to beat.

Do you get to fly much outside work?
Always. The only way to make it from engineering into flight testing is to fly as much as you can, and as many weird planes as possible. Engineers don’t get offered test pilot jobs from sitting at their desktop computers.

My wife, Jennifer, my best friend, Justin, and I actually set up Wasabi Air Racing to create test-flying opportunities that we couldn’t get while working as engineers. Reno has been a great location for us. It’s a place where good data is valued and our results can be seen by lots of potential customers.

What’s the most valuable career advice you’ve received?
“You don’t have to make a specific destination decision, just pick a general direction and keep your foot on the accelerator. You’ll figure out where you’re going once it gets closer to the horizon.