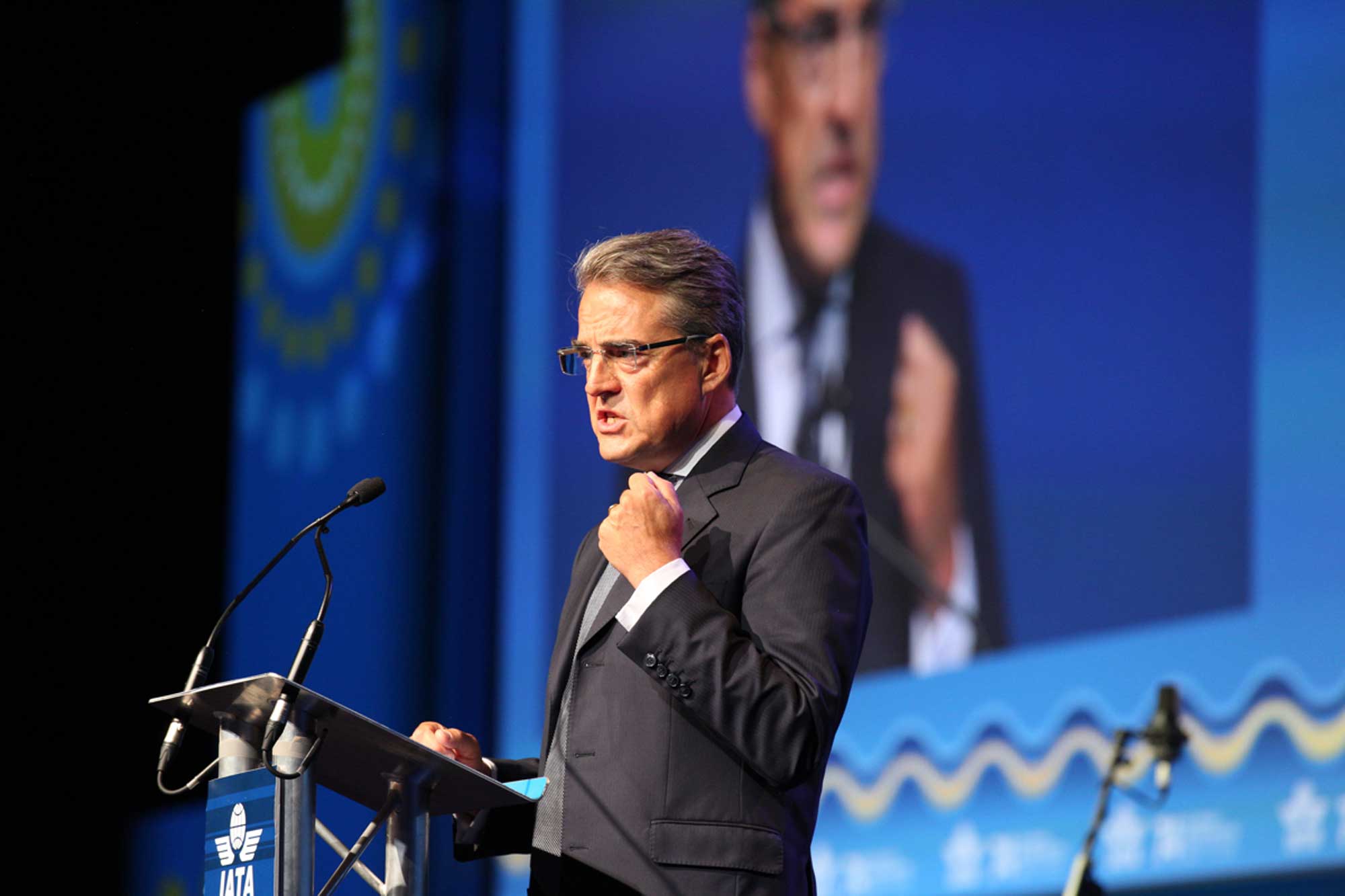 The International Air Transport Association (IATA) announced its expectation for airlines to achieve a collective net profit of $33.8 billion (4.1% net margin) in 2018.

This is a solid performance despite rising costs, primarily fuel and labour, but also the upturn in the interest rate cycle. These rising costs are the main driver behind the downward revision from the previous forecast of $38.4 billion in December 2017.

In 2017 airlines earned a record $38.0 billion (revised from the previously estimate of $34.5 billion). Comparisons to this, however, are distorted by special accounting items such as one-off tax credits which boosted 2017 profits.

Profits at the operating level, though still high by past standards, have been trending slowly downwards since early 2016, as a result of accelerating costs.

“The industry’s financial foundations are strong with a nine-year run in the black that began in 2010. And the return on invested capital will exceed the cost of capital for a fourth consecutive year.

In 2018, the return on invested capital is expected to be 8.5% (down from 9% in 2017). This still exceeds the average cost of capital, which has risen to 7.7% on higher bond yields (7.1% in 2017). This is critical for attracting the substantial capital needed by the industry to expand its fleet and services.

Inflation pressures are starting to emerge at this late stage of the economic cycle and airlines are facing significant pressures from rising fuel and labour costs in particular.

Overall unit costs are forecast to rise 5.2% this year, after a 1.2% increase in 2017; a significant acceleration.

Providing some offset to accelerating costs is a strong revenue environment, as demand from passengers and shippers continues to expand well above trend, and pricing has turned positive.

Unit revenues are expected to rise by 4.2% in 2018, lagging the 5.2% rise in unit costs. This will squeeze profit margins.

Demand is getting a boost from stronger economic growth and the stimulus from new city-pair direct services. Capacity is expected to grow by 6.7% (the same pace as in 2017). The passenger load factor is expected to be 81.7%, up a little on 2017 (81.5%).

Cargo demand has benefitted from the largely unexpected acceleration in the growth of the global economy over the past year. As businesses rushed to respond, they turned to air transport to replenish inventory, producing strong air cargo growth in 2017.

Since cash from operations will be squeezed by accelerating costs and capital spending is rising, free cash flows are expected to fall to around $4 billion.

Key balance sheet ratios, such as net debt adjusted for operating leases/EBITDAR, have improved significantly since 2014. Further debt reduction is expected to be sufficient to stabilize this ratio in 2018.

Growing uncertainty in the direction by which global affairs will evolve could present risks to the industry’s outlook. These include the advancement of political forces pushing a protectionist agenda, uncertainty following the US withdrawal from the Iran nuclear deal, lack of clarity on the impact of Brexit, numerous ongoing trade discussions and continuing geopolitical conflicts.

“The world is better off when borders are open to people and to trade. And our hard work as an industry has primed aviation to be an even stronger catalyst for an ever more inclusive globalization.”

* North American airlines are expected to post a net profit of $15.0 billion (down from $18.4 billion in 2017) accounting for 44% of global profits (down from a peak share of 60% in 2015). Average profit per passenger is expected to be $15.67. The region continues to generate the highest margins, returns on capital and US dollar amounts of profit. However, margins are being gradually reduced by rising costs from peak levels in 2015.

* European airlines are slowly moving towards North American performance (some individual airlines already match). The region’s airlines are forecast to generate the second highest net post-tax profits of $8.6 billion in 2018 (up from $8.1 billion in 2017) and a per passenger profit of $7.58 ($7.53 in 2017). Extensive hedging by European carriers is helping to improve performance by delaying the impact of higher fuel prices (while North American airlines with lower hedging positions are more immediately exposed). The gap in profitability with North American carriers is largely driven by breakeven load factors which are higher than in North America due to industry fragmentation and higher regulatory costs in Europe.

* Asia-Pacific airlines benefitted from the strong growth in cargo revenues last year, since the region is the manufacturing center of the world. In 2017 the region generated the second largest profit at $10.1 billion. This year the region slips just behind Europe with net post-tax profits of $8.2 billion, as the end of the business inventory restocking cycle slows cargo, particularly relative to travel. On a per passenger basis, airlines generated a profit of $5.10 ($6.82 in 2017). The region is now the largest in both cargo and passenger markets, with 37% and 33% shares of these global markets.

* Latin American airlines have achieved a strong recovery in financial performance to achieve a net profit of $0.9 billion (up from $0.5 billion in 2017). On a per passenger basis, airlines earned $2.95 ($1.57 in 2017). This is a healthy turnaround from the 2015 loss of $1.6 billion when the region’s economies suffered from the fall in commodity prices. Restructuring, stronger commodity prices and the economic recovery in Brazil all helped to improve the situation. There are still problems with some of the region’s economies and airlines continue to struggle with inadequate infrastructure, onerous regulation and high costs in some countries.

* Middle East airlines are generating a recovery, though more muted than in Latin America.  The rise of oil prices is helping revenues and the oil-based economies in the region, aero-political relations with the US have improved, while the Gulf airlines have substantially curbed growth. Net profits are forecast to rise to $1.3 billion in 2018 (up from $1.0 billion in 2017) or $5.89 per passenger ($4.81 in 2017).

* African airlines continue their very slow emergence from the 2014 low point ($900 million loss) of financial performance, with losses continuing at the $100 million level. This is unchanged from 2017 when losses were cut as traffic, particularly cargo to Asia, grew in excess of capacity raising load factors from previously low levels. Net loss per passenger improved to $1.55 ($1.66 in 2017). 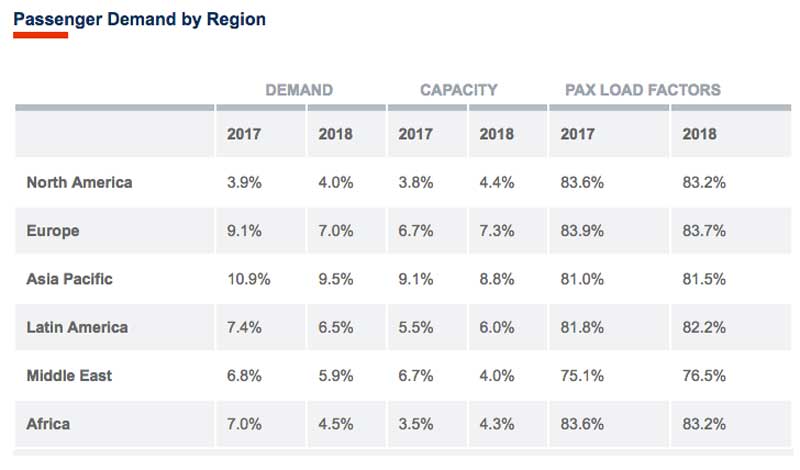 Future for the airline industry, by the man who talks to CEOs

The airline industry has overwhelmingly thrown its support behind full implementation of the Carbon Offsetting and Reduction Scheme for International ...

Air passengers in Europe are enjoying an unprecedented level of choice and competition in air travel, despite the constraints imposed by a lack of new...