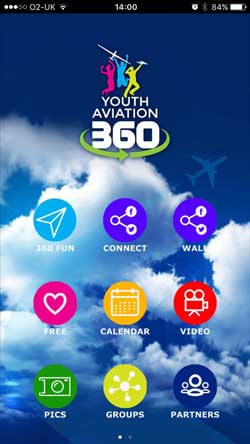 The Air League has launched an app which is designed to function as a one-stop-shop for young aviators.

It’s supported by several aerospace companies, including Boeing, and the app is also supported by Aerobility and Fly2Help, charities that help people with disabilities to fly, making it truly universally accessible.

“The Air League are determined to keep Britain at the forefront of aviation, and this app is designed to be a one-stop-shop for the pilots and engineers of the future,” said Andy Perkins of the Air League. “At the tap of an app, young people will have access to aviation images and videos, scholarships, events, and a variety of other opportunities designed to give them a start in the industry.”

The app lets people connect with each other, explains The Air League. Want to ask for advice from fellow flying enthusiasts? To share that great picture you snapped? To show off the video you took? This is the place to be. The app also has VR/360 connectivity so users can interact and get engaged with aviation through Virtual Reality (VR) headsets and mobiles.

The app is designed to be accessible to people from all backgrounds and with diverse interests. The Institution of Mechanical Engineering will appeal to those who would rather keep their feet on the ground, while those who want to earn their wings can get involved in the British Gliding Society and the Light Aircraft Association, or the airline pilot training programs of Bristol Ground school and CTC Aviation.

It’s available for free on both iPhone and Android, just search for ‘Youth Aviation’ in your phone’s app store.

Air League ties up with Skyborne for scholarship

Applications open on 4 November 2017 for next year’s flying scholarships from the Air League Trust. The scholarships provide funds for flying ho...

Win a week’s gliding at Lasham with CTC Aviation, The Air League and British Gliding Association

A new initiative to help aspiring young pilots into a career in aviation has been launched by CTC Aviation, the Air League and Lasham Gliding Club.