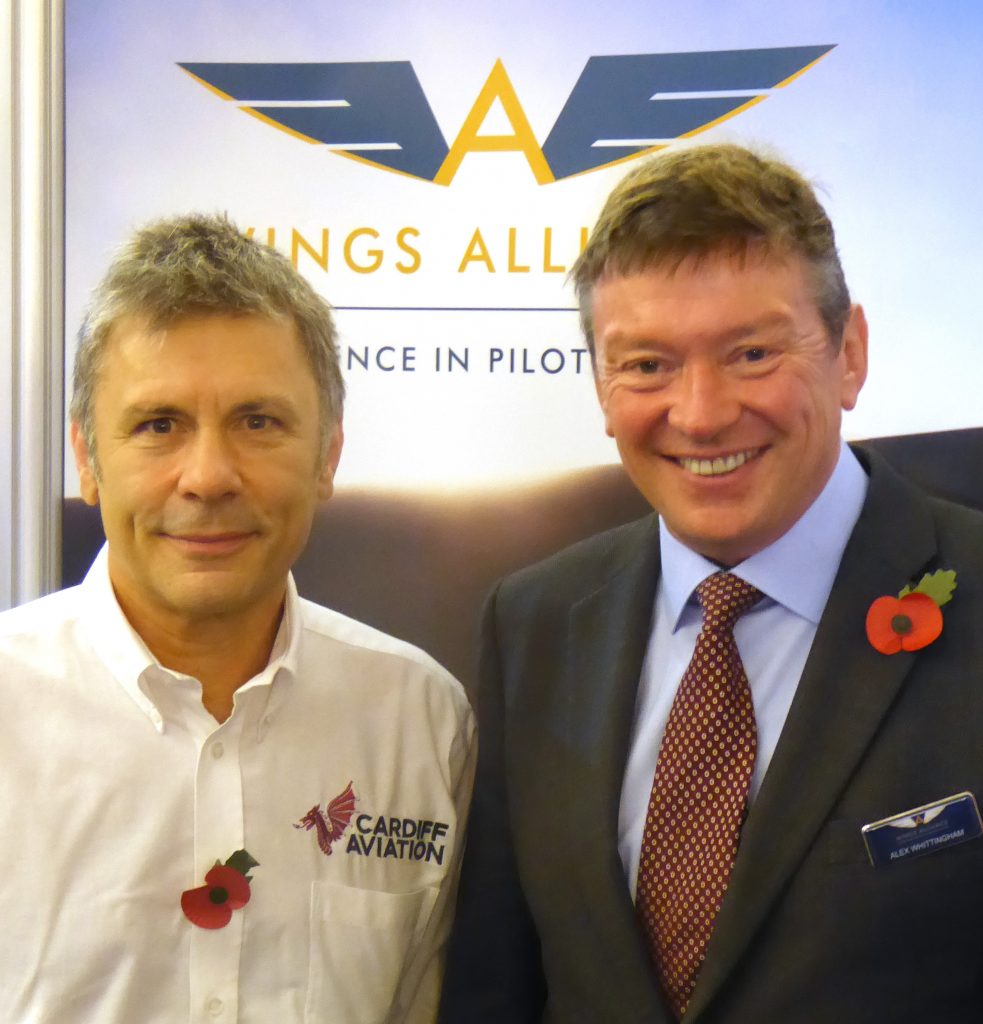 More than 1,500 aspiring pilots attended Pilot Careers Live on Saturday, eager to begin their pilot training journey which will hopefully lead them to a career in first the right- and then left-hand seat. But for many visitors, the first question is, “How do I afford it?”

With the price tag for an Integrated course the steepest it’s ever been – the training can in many cases set cadets back £100,000, and that’s before a Type Rating – Modular training,  when pilots break down their training into chunks and pay for each round of training as they can afford, is a route that’s of interest to an increasing number of people. But despite offering a total training cost which is often half of Integrated providers, Modular has been seen by some as a second-choice option, with its perceived lack of a coherent training record and lesser official airline links.

Now, a newly-launched alliance of Modular training providers, under the name Wings Alliance (WA) is seeking to change this.

Alex Whittingham, MD of WA founding member Bristol Groundschool, explains. “A potential disadvantage of the Modular route has been that you can’t always put your hands on your training records, for example if you’ve done your PPL in America, and your groundschool in the UK and your CPL in Spain. As a student, getting your hands on all those can be quite difficult but if all the schools they train at are members of the same alliance, obviously we can maintain the training record.”

While Wings Alliance doesn’t deny the links between large Integrated providers and airlines, Alex believes that Modular trainers, and their output, bring their own benefits. “For employers, the output from the Integrated schools is very good. It’s homogenous and it’s exactly what they say they’re going to deliver, but it doesn’t suit everybody. Some of the employers find it difficult recruiting people who have never worked outside aviation, who don’t have much in the way of life skills, who might have different aspirations, who as soon as they get the opportunity, are off to legacy carriers. Modular students tend to have a more realistic view of life and also tend to be better motivated, as in most cases, they have trained with their own money.”

So why choose Modular? “People have said in the past that you should do your training all at one school.” Alex explains. “I don’t know who said it, and what their motivation was, but I can’t see the logic in it myself as, in my view, if you want a specialist job done, you go to a specialist school.”

“It’s all about choice,” he adds. “What suits one person, isn’t going to suit another. An example of that is the CPL IR training. It’s possible to get some very high-value courses in Eastern Europe. Unfortunately, to do that, you have to be able to go away for six weeks or so, and not everyone can go away. Different people have different priorities. This is where we hope to add some value, because we can guide people so they don’t end up getting ripped off by some dodgy flight school.”

“Flight training is overpriced, and people have been getting away with it”

Another keen advocate of the alliance is Bruce Dickinson, MD Cardiff Aviation and WA member. Affordability is a key issue for Bruce. “Flight training is overpriced, and people have been getting away with it,” he said. “We know, in the industry, the cost of delivering Integrated courses. We know the profit margins that are being created, and how money’s being spent too. So we know that flight training should be available at a much more reasonable price.”

As for how they’re going to assure that quality of each of their member trainers? The Alliance plans to have a ratings and review system, similar to TripAdvisor, says Alex, which will allow for complete transparency. “We want to know that trainers are delivering on time, on quality and value – and that all the people who go there are coming back and saying the same thing. If somebody has a good experience with one of our members, they can come back and write about it.”

According to Bruce, quality assurance is also in the interests of all the Wings Alliance members. “There’s a vested interest from the schools who are in the middle of the sandwich,” he explains, “in making sure that all the other bits of the sandwich – the bread and everything else – are all up to snuff, as they put a considerable amount of time and effort into making sure that the particular candidate does well in whatever phase of the programme. So if they feel that the person was let down by another trainer, they can speak out.”

“LoganAir is signed up and they’ve said they’re very happy to support us.”

Alex is hopeful of more and more airlines getting behind the Wing Alliance and the more cohesive version of the Modular route. “What we’re getting is indications of interest,” he said. “LoganAir is signed up and they’ve said they’re very happy to support us. Essentially that’s on the back of an arrangement that they have with one of the Wings Alliance members, Tayside Aviation, which feeds flying instructors to them.” There are also links between Air Atlanta and Cardiff Aviation, and Dickinson’s own airline too, which will have a need for modular trained pilots in the future.

Some airlines already have a preference for modular students, adds Alex. “Many of the Integrated schools’ output are basically targeted for A320 and B737 and are operators of flight management systems and autopilots – that’s not what LoganAir’s about. They specifically want Modular candidates, but where do they get them from? They have the problem that everybody who currently wants to recruit modular pilots has, that they’re not homogenous, they’re not selected and you can’t go to a single school and say, “Give me 50 pilots,” because no single school outputs 50 pilots.”

Alex is keen to stress that, in the end, the choice of training is always down to the pilot. “Honesty, quality and value, these are the lynchpins of it. The main part of this is hands-on-the-table honesty, saying to people, these are your choices in life, you take control over how you train. We’ll help, we’ll provide feedback from the schools and lay this information in front of you, but essentially these are your choices.”

Find out more about Wings Alliance at www.wingsalliance.eu.

Tayside Aviation to become ‘an international centre of excellence’ under new ownership.

One of the UK’s leading ATPL modular training organisations, Bristol Groundschool, is to go ahead and hold exams for ATPL Theoretical Knowledge ...