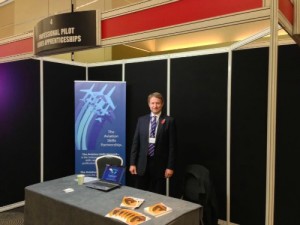 A team from the PPHA was present at the Professional Flight Training Exhibition on 3 November, with Simon Witts, MD of the Aviation Skills Network and Ray Elgy, Head of Licensing from the UK CAA, explaining that the result will be an apprenticeship route to a pilot qualification, which will be equivalent to an Honours degree

The first trial apprenticeship intake is expected to begin in March 2013, with Jet2 to train the first intake of cadets.

Simon explained, “The focus of the scheme is to increase the accessibility of training for pilots and make it easier across the board for people to gain a pilot qualification.” He added, “There is forecast to be a shortage of pilots and we want to increase the ease of access for those aspiring to enter this profession and who may be unable to do so, possibly due to the cost of the training.”

This scheme hopes to be able to secure student-loan type funding for pilots. Simon further explained, “The apprenticeship will encapsulate all of the required elements to reach the ATPL with an aircraft type rating, through a MPL (Multi-Pilot Licence) or integrated training route, but since it will be an educational framework with an entry point equivalent to the first year of a degree, eligible students should be able to qualify for a grant or loan.”

The PPHA will combine recognised pilot training from FTOs with an academic higher qualification which will be similar in structure to an Honours degree and will cover areas such as engineering and maintenance and ATC, as well as the usual pilot theory. This will give trainee pilots the option of a career change if a cadet cannot see the training through to the final pilot qualification. It is the academic side of the apprenticeship that is hoped will allow cadets to apply for government student loans. The scheme is also being part funded by the National Apprenticeship Service to encourage the development and take up of higher apprenticeships that are equivalent to degrees.

Ray Elgy, Head of Licensing at the CAA, added that the UK CAA is thoroughly behind the new scheme and will be working with both universities and FTOs to produce a standard format which airlines can use to offer an apprenticeship. The scheme will also be exploring the possibility of removing VAT on flight training.

It is planned that both airlines and FTOs will be involved with the scheme, with practise elements of the training being carried out by the FTOs. According to Mr Witts, the scheme will be developed by the airlines, for the airlines, with variations between each airline’s offered Higher Apprenticeship. Currently Jet2 are agreed to take on the first ten apprentices, with other airlines considering apprenticeships.

For more information about the scheme and for pre-entry requirements as they become available, email [email protected] or visit http://www.simonwitts.co.uk/Site/The_Aviation_Skills_Partnership_%26_Network.html

It’s an exciting time for flight training at the moment, with British Airways recently announcing the second phase of its Future Pilot Programme...

As part of its campaign to combat the seven most serious safety risks currently facing the airline industry, the UK CAA has developed a pilot training...