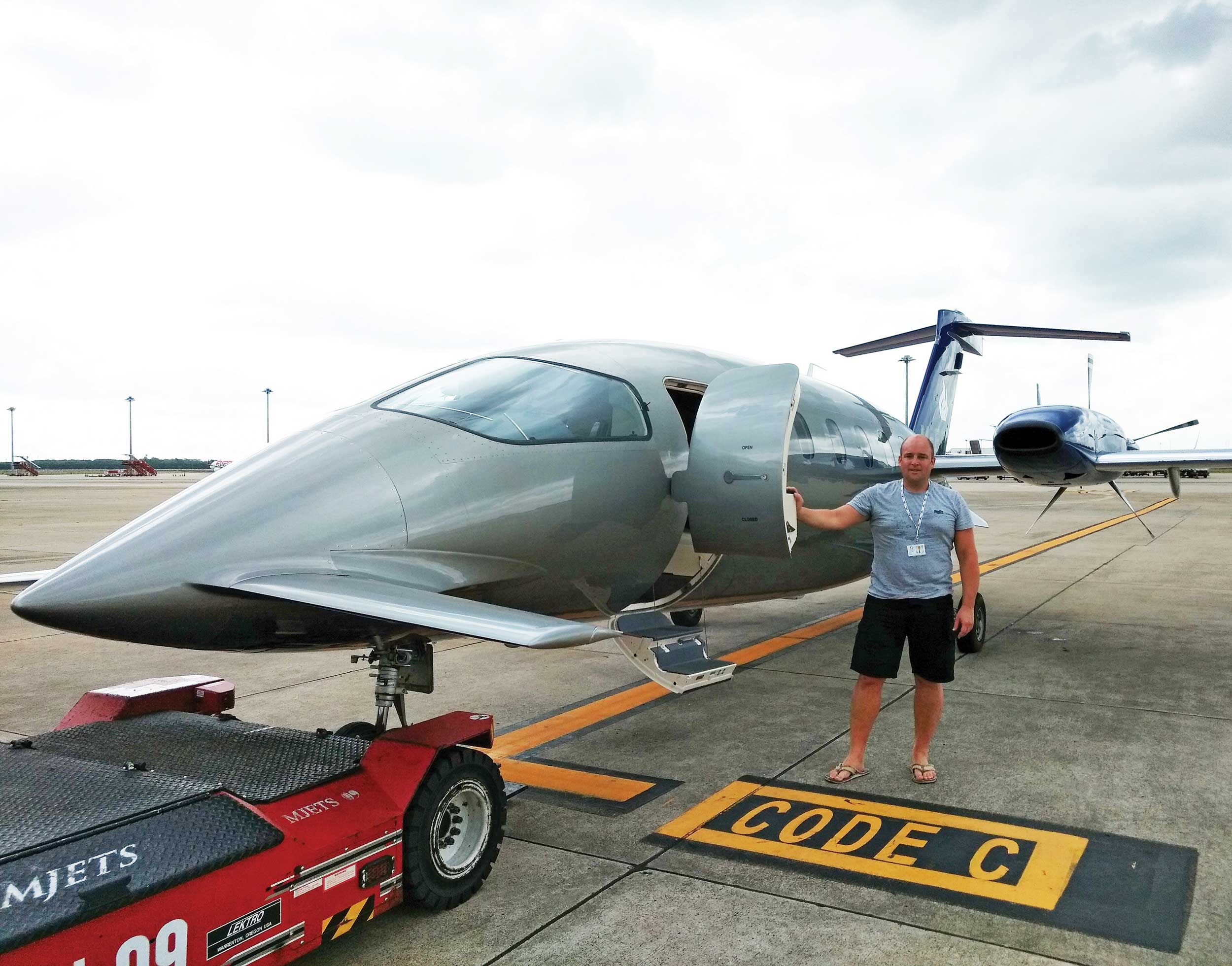 This article first appeared in FLYER in January 2019

How did you get into flying?
I never thought it’d be possible to become a pilot so, as I also had an interest in mechanics, I got into engineering instead.

However, at the Royal International Air Tattoo in 2006, I realised that I still wanted to fly, so I booked a trial lesson with Cotswold Aviation. They asked if I wanted to bring any spectators, to which I replied, “No, this isn’t for fun, I want to make flying my career.”

Tell us about your job…
I’m a corporate pilot for Skypark UK. As well as flying a privately owned Piaggio P180, I also help to manage the aircraft and deal with flight planning.

Destinations vary on business needs, but are usually within Europe: France, Spain, Italy, Germany and the UK. All our clients are business people, who we fly to meetings and back. Time is their biggest asset, so they don’t want to waste it waiting in line for check-in – sometimes they even hold meetings during the flight.

The Piaggio is a great all-rounder, very responsive to hand-fly and also good on autopilot. It’s as fast as a small jet and has a 5ft 6in cabin. The only downside is its fast approach speed – I like to have a minimum of 1,000m of runway.

The best bit about my job is that on a rainy day, when everywhere is gloomy and everyone is miserable, I take off and burst through the clouds where it’s always nice and sunny. I like aviation, travelling and meeting new people, so it’s an absolute winner.

I initially planned to be an airline pilot, but an easyJet flight from Bristol to Glasgow made me think, “Would I really want to do this five times a day?” As a corporate pilot, even though I’ve visited many airports multiple times, I haven’t yet had the same day twice, so it never gets boring.

Flexibility is essential – I can be called anywhere, at any time. Some clients give a month’s notice, others change their mind in the air.

What training did you have?
I did it the modular way, which took five years as I worked as well. Due to bad UK weather I finished my PPL in Florida. I did my ATPL at EPTA Bournemouth – I’d actually started my studies at home, but after six months still hadn’t got past page one – and my CPL at Aeros Gloucester.

In 2013 I became a Flight Instructor (FI), as I was spending too much money keeping current. Looking back, small things like briefing passengers for emergencies have really stuck with me. Sitting in an aircraft with just your FI, it seemed like a lot of nonsense at the time.

However, before a flight, it’s extremely important to consider how you’d handle something like landing with a fire on board with passengers. Luckily, I’ve never been in such a situation, but if it happens, you have to be prepared.

What’s been your favourite flight?
Ferrying a Piaggio P180 Avanti II to Australia in June 2018. We did it in 13 sectors, from the UK to Venice, Crete, Saudi Arabia, Dubai, Pakistan, India, Bangladesh, Bangkok, Singapore, Bali, Darwin and finally Alice Springs.

Everywhere we went, people were accommodating and happy, and it was great getting to experience all of the different cultures, discovering how the world changes along the way. I was shocked by the amount of desert – from Crete to Bangladesh and most of Australia – everything was sand!

And your favourite airfield?
Oban Airport in Scotland, because the people are really welcoming. First time I landed there, I was stunned by the silence – there’s no noise, no traffic, nothing.

It’s a beautiful place, located beside a lake and with completely different scenery to what we have here in Gloucestershire.

Do you get to fly much outside work?
Sometimes I go flying with friends, but not a lot. It isn’t cheap to hire an aircraft and I don’t really see the need to spend money to fly an old Cessna if I can pilot a multimillion euro aircraft and get paid for it!

What’s the most valuable career advice you’ve received?
Don’t give up – getting into aviation is hard. When I first started my training, I met guys with 2,000 hours of experience, working as parking attendants as there weren’t any jobs at the time.

Still, you need to stick with it. As long as you keep improving yourself, people will take notice. At times I wanted to quit but a friend I met at ATPL groundschool, Richard Lisowski, kept me going. Now we’re both corporate pilots.

Mark Walters has visited 48 different European airports in a Piaggio Avanti, as a pilot for Skypark UK

Training company CAE is forecasting demand for 50,000 new pilots for business jets over the next ten years. It’s the first time CAE has i...

CAE announced is expanding business aviation training with the launch of the new Bombardier Global 5000/6000 full-flight simulator (FFS) with the Visi...

Business and private aviation needs different training for pilots and cabin crew and TAG Global Training has provided courses for more than 22,000 par...