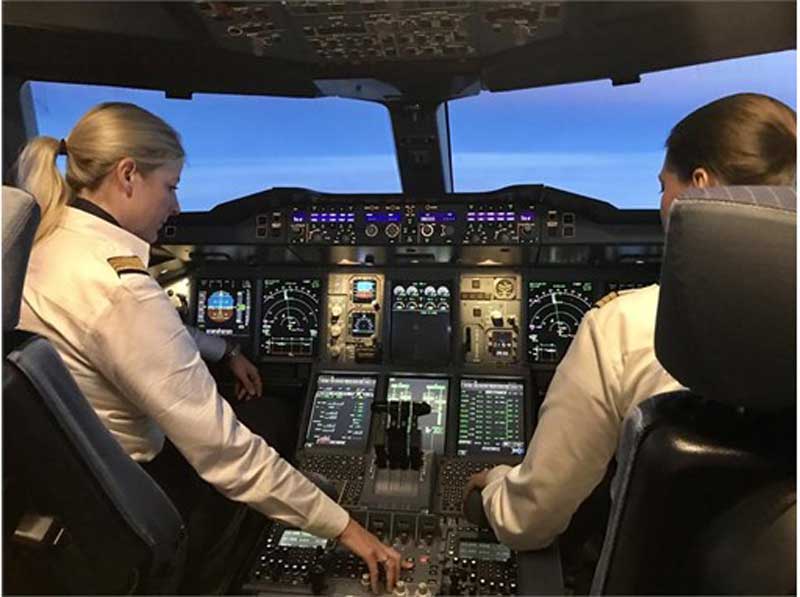 The jets were flown from Frankfurt, Munich, Düsseldorf, Vienna, Zurich and Brussels by two female pilots each.

That’s not all, Lufthansa’s prestigious FlyingLab is on flight LH440 from Frankfurt to Houston, under the command of an all-female crew – in the cabin and in the cockpit .

The FlyingLab is the world’s only open innovation platform in the air. It consists of an on-board conference, which every passenger can follow on his or her own personal device and the opportunity to test the latest innovative products and services.

These flights are a clear signal that Lufthansa Group is serious addressing the issue of gender imbalance in aviation.

Dr Bettina Volkens, of Deutsche Lufthansa AG, said, “We have already been able to increase the number of female applicants at our pilot flying school by addressing applicants in a more targeted manner and by making it easier to combine family. 15 percent of our junior pilots are currently female.”

Above: Two Eurowings female pilots, Captain Kirsten Jansen and First Officer Alina Käufer talk about their office – an A320 cockpit. What motivated them to apply as a pilot? Is it harder as a woman in the cockpit than for the male colleagues? What prejudices exist? And how does a woman manage the balancing act between her job above the clouds and her down-to-earth family life? In German with English sub-titles.

“To meet these goals, we are preparing our best female junior executives for their future management responsibilities with our own one-year program,” said Volkens. “At the same time, it is important to me to reduce unconscious bias when filling vacancies.”

Lufthansa is using the interruption caused by the pandemic to modernise training at its in-house flight schools. The principle of ab-initio training w...

Lufthansa Aviation Training (LAT) – which looks after all types of air crew training for Luftansa’s airlines – has added two more of...