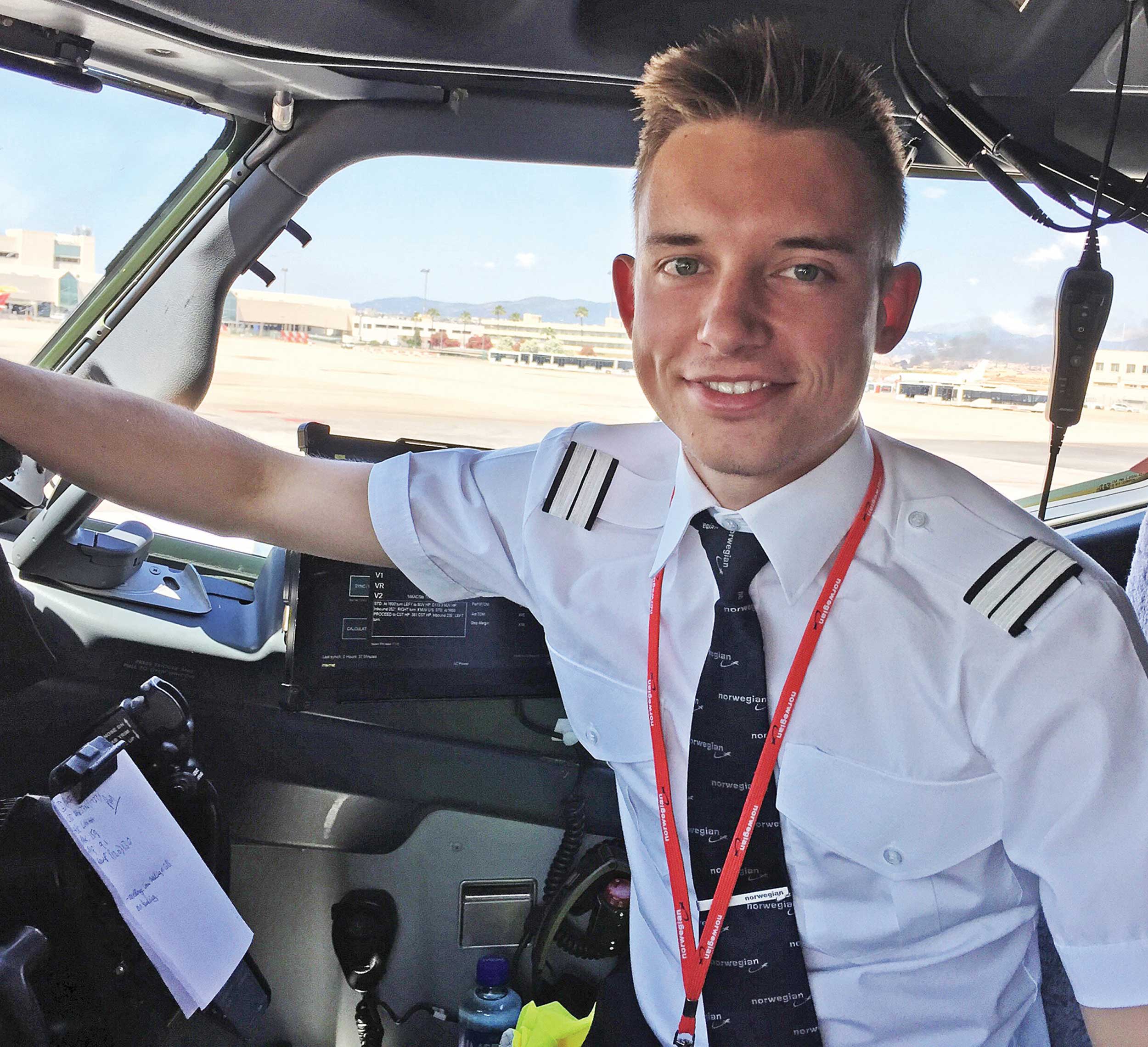 This article first appeared in FLYER in November 2018

As First Officer on a Boeing 737, this Oslo-based pilot’s cockpit views include the Alps, Norwegian lakes and sunrises at 36,000ft

How did you get into flying?
I’ve always wanted to become a pilot. My mum is from Germany and we used to fly there on family holidays, so I was introduced to air travel at a young age.

After my first flying lesson at what’s now Cotswold Airport, aged 14, I was immediately hooked.

Tell us about your job…
I’m a First Officer on a Boeing 737 at Norwegian. Based in Oslo, I fly domestic routes as well as all over Europe. It’s a nice variety – one day it’s six 30-minute flights, the next day a few longer ones. The only downside is the 0400 check-in, but watching the sun come up at 36,000ft definitely makes up for that.

The views from the cockpit are amazing – sometimes you can even detect the Earth’s curvature. Flying over the Alps also provides great scenery – Switzerland, France and Germany in a single glance.

I really like the working environment – as Oslo is one of Norwegian’s largest bases, cockpit and cabin crew change almost daily so you get to know a lot of different people.

But I also like staying at our destination overnight and returning with the same crew, as that way you get to know your colleagues better, and teamwork is extremely important.

Nowadays, although the Captain is still ultimately responsible, it’s more about CRM (Crew Resource Management) – making decisions together and with equal input. Usually, on departure, the Captain flies the aircraft while I deal with ATC, paperwork and fuel checks, and on return we switch and then I get to fly.

The 737 is a particularly nice aircraft to fly. We use autopilot a lot, but Norwegian also encourages us to fly manually, to develop our skills – you really need them when there’s bad weather during take-off or landing!

Airline pilots should also be humble, confident and hard-working.

What training did you have?
I soloed on my 16th birthday, obtained my PPL on my 17th and started CPL training when I was 18. I didn’t see the point in waiting, as the earlier you start, the more experience you can gain.

In my opinion, GA is the best way of getting into commercial aviation – it gives you more hands-on experience – and is quicker and cheaper. The integrated training route, following the entire course at one school without previous flying experience, can easily set you back £100k.

But doing it the modular way costs about £60-70k, which is still a lot, especially as I self-funded most of it. After obtaining my CPL, I got a pilot job at FlyBe and I moved to Norwegian last September.

An interesting part of my training included dealing with passenger-related problems.

Recently, a passenger had an epileptic fit on a flight from Las Palmas, but their medication was in the aircraft’s hold. We looked into returning or diverting to Morocco but, after liaising with the cabin crew, arranged for an ambulance to meet us on arrival. Situations such as that emphasise the importance of teamwork in commercial aviation.

What’s been your favourite flight?
Flying into northern Norway for the first time, and seeing all those little lakes surrounded by mountains.

Because of the mountainous landscape, the approach was a bit more complex, which made it interesting. As we were so far north, the sun was still in the middle of the sky, even though it was night, which made for spectacular views.

And your favourite airfield?
For commercial aviation it’s Molde, a really nice Norwegian airport close to the water and next to a mountain.

When it comes to GA, there are so many nice places, especially in the UK. My favourites are Cotswold and Sandown, Isle of Wight.

The people at both are really nice and there’s no stress, which makes flying in there enjoyable, and also their locations are great – in the middle of the countryside and close to the sea.

Unfortunately, I don’t have much time at the moment, but I’m hoping this will change.

I really enjoy GA – in the future I’d like to tour around Europe. I’d also love to get my aerobatic rating and compete professionally – Paul Bonhomme is my role model.

Don’t rule yourself out of a job offer until you have one on the table.