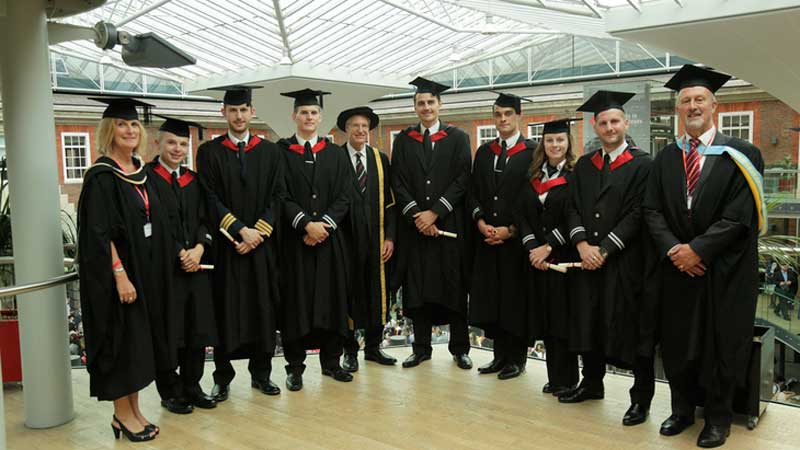 The degree course, designed specifically for pilots, was launched in 2013 in a partnership between airline pilot training and simulation organisation L3 Commercial Training Solutions (L3), Middlesex University and easyJet.

The seven pilots graduating are:

They are the first of more than 130 students enrolled on the Middlesex University degree course while completing or having completed their airline pilot training at the L3 Airline Academy.

The BSc (Hons) degree in Professional Aviation Pilot Practice (PAPP) is awarded by Middlesex University and run through the Institute of Work-based Learning. It does not require cadets to attend a university campus but enables them to gain two professional qualifications (airline transport pilot licence and degree) within three years.

The first two years of the course are completed at L3’s Airline Academy, through training on an airline pilot career programme alongside parallel, practice based university work. Study continues beyond their initial airline pilot training once they join easyJet, flying as a co-pilot while completing their third and final year of the degree, allowing them to learn while they earn.

Training to become a pilot while completing the degree can also provide aspiring pilots access to student loans to help finance their studies.

Speaking about the graduation today, Brian Tyrrell, easyJet’s Head of Flight Operations, said,  “I am delighted that the first of our pilots participating in this degree are graduating today as it is absolutely vital to easyJet’s future that we have a pipeline of talented young pilots coming through.”

Anyone wishing to apply to the Generation easyJet Pilot Training Programme and integrate a degree into their training can do so via L3AirlineAcademy.com/easyJet