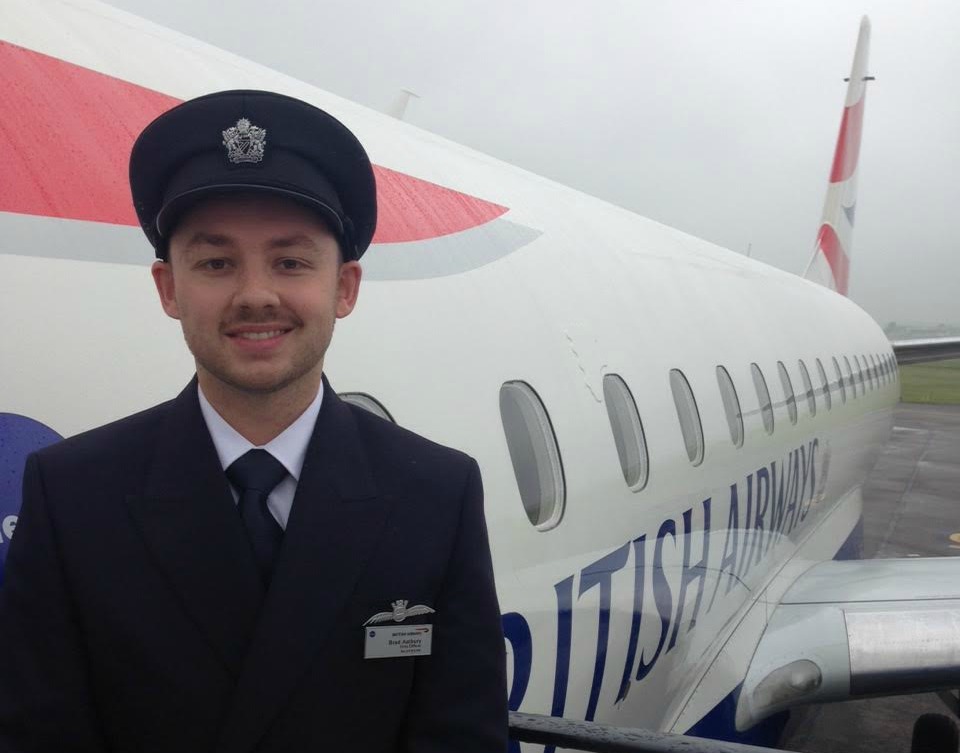 When Brad Astbury completed his pilot training in mid-2011, there were few job opportunities available. Four years on and he’s about to begin his line training as a First Officer with BA CityFlyer. He explains how perseverance, belief – and a visit to Leeds in 2014 – made it happen…

I began training in January 2010 on an Integrated course at Cabair (now defunct) and I graduated June 2011. There weren’t that many opportunities available so straight after I graduated, I got a job in a pub to earn some money while I was looking for pilot jobs. Alongside that, I was trying to pay for as much flying as I could to keep my licence current. I stayed there for around two years, before getting a job with a pilot supplies company called Airplan Flight Equipment (AFE).

I worked with them for a couple of years and travelled around quite a few aviation exhibitions with them. It was at the 2014 Leeds Professional Flight Training Exhibition (now Pilot Careers Live), where I was working on AFE’s stand, that I met the guys from Kura Aviation.

They were a brand new company when I met the team, and I signed up for the first ever Bestpilot course that they ran. The first two weeks took us through all the non-technical skills that are expected of a pilot, Crew Resource Management (CRM) etc. Then they sent us across to Holland for a course in Boeing 737 Simulator – when I got back, I found out that Kura had managed to get me, and another couple of guys who were on the course with me, an interview with BA CityFlyer. We had the interviews in January this year and all three of us ended up getting jobs! I’m pretty sure I wouldn’t be where I am today without Kura, I’m really glad I was able to meet the team at the Leeds show – a couple of phone conversations led to me being one of the first four people to go through the process with them and I’ve come out the other side with an airline job.

I’ve done all my training now, I’ve got two weeks of leave before I begin what’s called ‘line-training’. This will mean I’ll actually start flying the aircraft with the airline – I’m so excited to begin!

To others who might be in the position of having an fATPL, but not necessarily having immediate job opportunities, I’d definitely advise perseverance. I’ve never wanted to do anything else, it was never really an option to just give up on it, especially after the amount of money you put into it at the beginning. I’m just so pleased that that belief and putting myself in the places to meet the right people has paid off. It’s very easy to get to a place where you’re just wondering if it’s ever going to happen – I certainly was in that place at one point. But I was able to get the job with AFE and it did keep me within the industry; I’d say that’s very important, as if you’re working within the aviation community, it’s much easier to meet people who might know someone, who might know someone. If you meet the right person or the right team, as I did, that could change everything for you. If you put yourself in that position, if you stay within the industry and keep yourself as involved as possible, that will help your chances.

Brad was interviewed by Pilot Career News in June 2015, two weeks before joining BA CityFlyer as a First Officer in July 2015.

This year’s Leeds Pilot Careers Live will take place on 4 July at the Royal Armouries Museum. Brad will be attending the Leeds exhibition on Kura Aviation’s stand, so if you have more questions about his experiences, or any aspect of pilot training, come along. Who knows where you could be this time next year. Tickets start at £5 (plus a small booking fee) for students, and are still available here.