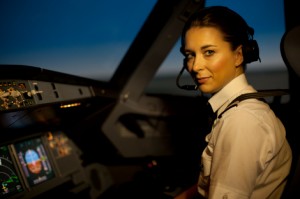 Out of a poll of 2,000 women, 63% said they were put off a career as a professional airline pilot when they were growing up for reasons including a lack of visible role models and being told it was a man’s job, according to British Airways.

The airline recently launched an awareness campaign for more female pilots in the aviation industry with TV presenter and pilot, Carol Vorderman.

In 2015 British Airways will be recruiting pilots, including those new to flying through the airline’s cadet training scheme, the British Airways Future Pilot Programme. The programme, aimed at anyone aged 18 to 55 with no previous flying experience required, opens to new applicants on February 23, 2015 and the airline hopes that its recent campaign for more female pilots will encourage more women to apply.

British Airways also plans to continue recruiting trained pilots from other airlines and the armed forces.

British Airways’ director of flight operations, Captain Stephen Riley, said, “This is a very exciting time to be flying with British Airways, we expect to have approaching 4,000 pilots this year, the most we have ever had in our 95-year history.

“We’re confident our commitment to investing in modern aircraft and developing new routes will continue to make British Airways a highly attractive airline for the world’s most talented pilots – regardless of gender.

“We’re continuing to attract top flying talent by developing new initiatives like our Future Pilot Programme and an awareness campaign to promote a career as a professional pilot to more women.

“We work hard to ensure we are selecting from the very best pilots available to continue our long-history of offering our customers the safest and most enjoyable flights possible.”
British Airways’ First Officer Emily Lester, said, “The British Airways Future Pilot Programme has allowed me to realise my dream of becoming an airline pilot.

“After an intensive training programme I am now flying to destinations throughout Europe and would encourage anyone thinking of a career as a pilot to apply.

“It’s an ideal route into an incredibly rewarding career for both men and women.”

The airline already has eight 787s and eight A380s and will welcome another six new aircraft in 2015, with a further 20 ordered and due to join the fleet by the end of 2017.

Be a pilot
see all articles