Bristol Groundschool, UK and European EASA ATPL distance learning specialist, has officially announced that the winners of the first round for this year’s ATPL Scholarship Programme. The winners are:

Winner Stephanie Bloxidge said, “Surprised is an understatement to how I felt when I was short listed for the Bristol Ground School ATPL Scholarship Programme. So, you can imagine my reaction when I found I had been selected! I feel privileged to have been chosen by such diverse figures from the aviation world. I know it’s going to be tough but I can’t wait to start my ATPL studies with Bristol Ground School and fly the flag for the girls!” 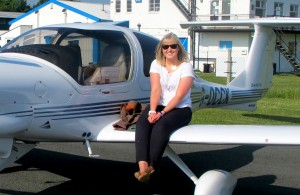 Alex Whittingham, Founder and Head of Training of Bristol Groundschool, explained, “We’re thrilled to have received 293 entries for this first round of the scholarship programme, nearly all of which were from students who have already earned their PPLs and are ready to move on to the next stage of their aviation training going the modular route.

“We’re also very pleased to have such a high calibre of judges on board, some of whom came through Bristol Groundschool for their ATPL training and many of whom are now working with some of the world’s most prestigious airlines and aviation organisations.”

The Bristol Groundschool ATPL Scholarship Programme was launched in early April 2013 in celebration of the school entering its 21st year in business, and was created to directly assist students with a passionate interest in becoming a professional pilot, who are on track towards their ATPL. Throughout the year, Bristol Groundschool will be awarding a total of 21 ATPL theory scholarships, each worth £2,140.

Entries for the first round of the ATPL Scholarship Programme closed on 5 May 2013. The second round of entries is set to open at the Professional Flight Training Exhibition in Leeds on 13 July 2013. The third round is scheduled for October, to coincide with Bristol Groundschool’s participation at the Professional Flight Training Exhibition at London Heathrow. To be eligible to apply, candidates must:

• Be eligible to live, work and study in the EU

Bristol Groundschool will be exhibiting at the Leeds Professional Flight Exhibition on 13 July. Get your tickets here:

More than 200 hours of pre-recorded ATPL classroom sessions are available from Bristol Groundschool’s webinar subscription service, called the B...

Wizz Air is on a massive pilot recruitment drive right across its network – the Hungarian airline wants to hire 4,600 new pilots by 2030.

One of the UK’s leading ATPL modular training organisations, Bristol Groundschool, is to go ahead and hold exams for ATPL Theoretical Knowledge ...