The truth about the global pilot shortage

It’s a phrase that’s everywhere at the moment: the pilot shortage. The huge numbers predicted by Boeing and Airbus – both manufacturing giants have forecasted the need for as many as 617,000 new pilots by 2035 – have been shared far and wide, with many outlets proclaiming that now is ‘a great time to become a pilot.’

But what’s the truth behind these numbers?

For those saying the pilot shortage is a big, fat myth, the numbers can’t be argued with: economies are growing, airline fleet numbers are expanding as never before, and over the next 20 years, projections show that, at the current rate of pilots entering the profession, there won’t be enough pilots to fly them.

However, once we break the numbers down, it’s not such a straightforward story.

As can be seen from Boeing’s outlook, the overwhelming need for pilots will be seen in the Asia Pacific Region. With soaring demand for aircraft in Asia, the carriers are recruiting for experienced pilots from Europe and the US. However, it is the captains, who can train their first officers, they are after, rather than freshly-qualified, low-hour cadets or qualified pilots without hours on type.

Emirates Flight Training Academy is currently constructing a training facility in Dubai scheduled to open in October 2016, which will be able to accommodate over 600 students at a time once fully operational. While the training centre will initially focus on cadets in Emirates’ existing National Cadet Pilot Training Programme for UAE nationals, the Academy intends to welcome international cadet pilots in the near future. 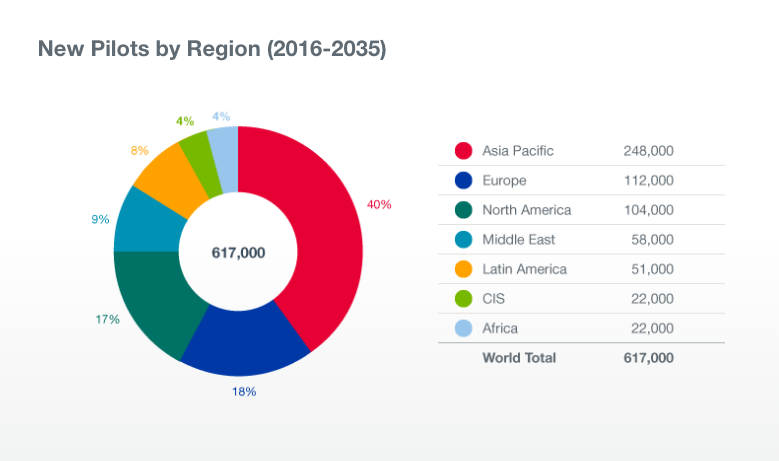 A shortage of pilots is also a genuine problem that’s facing US regional airlines right now, as more captains reach the mandatory retirement age of 65 and following an FAA requirement for first officers to have 1,500 hours total time as a pilot. Add to that the fact that fewer young people are choosing commercial aviation as a profession, and regional carriers face a challenge.

Speaking to Bloomberg, Greg Muccio, a senior manager at Southwest Airlines Co. said, “That is one of the things in my job I get to worry about every day and when I go to bed at night. The biggest problem is a general lack of interest in folks pursuing this as a career anymore. That’s what puts us in the most jeopardy.”

Muccio’s worries aren’t unfounded; according to a study released by North Dakota and the University of Nebraska-Omaha, released in 2015, the top three reasons that US aspiring pilots are changing their career plans are the cost of flight training and certification, low pay at regional carriers and the 2013 regulatory change that mandated a sixfold increase in flight hours required by First Officers.

“Yes, the shortage is real. It’s critical, however, to make clear which sectors of the airline industry we’re talking about”

So there is a shortage, and it’s having an impact on North American regional carriers, but as pilot Patrick Smith explains on his blog, Ask the Pilot, “Yes, the shortage is real. It’s critical, however, to make clear which sectors of the airline industry we’re talking about. The first step in this discussion is to categorize properly. First, we are looking specifically at the US airline industry… Other countries often recruit pilots differently, with a growing reliance on so-called ‘ab-initio’ programs, whereby young candidates are chosen from scratch, with no prior experience, and are groomed from the ground-up, so to speak, in a tightly controlled regimen that puts them in the cockpit of a jetliner very quickly. These programs are ultra-competitive and there is no shortage of applicants.”

The cost of pilot training

A major factor driving fewer people to take up the career is the cost of training. In the past, many airline pilots have come from a steady source of retiring military cockpit crews, though as those numbers have gradually dwindled, the onus has shifted on to civilian-trained pilots. Aspiring pilots, who aren’t able to secure a place on the limited number of airline sponsored training schemes, need to find large sums of money to pay for their own ab-initio-to-ATPL training costs, and in many cases, a Type Rating too, before an airline will consider them employable.

“The number of new pilots entering training has contracted,” explains Wendy Pursey, head of membership and career services at BALPA.

“Previously, cadets would have been funded predominantly by their parents – we know that from our own membership surveys – but when we had the financial crisis, a lot of parents weren’t able to liquidate funds and the banks weren’t loaning for pilot training,” she says.

For someone who wants to take themselves from novice to the right hand seat, it can cost anywhere between £60,000 and £100+. In order to cover these training costs, many pilots will take out substantial loans, yet even once they get into an airline flying job, the starting salaries are often not high enough to live on, after factoring in repayments. In other words, the number of pilots willing to commit the time and money to their education and training when the return on investment is at best unpredictable, is far fewer than it’s ever been.

As aspiring pilot, Travis Evans, 32, explained to Mashable, “I had so much momentum, was going into it with this drive, but once the financial aspects started to take over, it was really discouraging,” he said. “It wasn’t that I’m medically disqualified, not that I wasn’t able to overcome the material. Every time I’d come to an obstacle, I’d overcome it, but the financial aspect put a stop to it right there.”

For those who are either unwilling or unable to put that kind of money up, the dream of a pilot career has fallen by the wayside.

However, while Wendy explained that, in practice, these factors should see a decline in interest in the profession, the high levels of attendance at Pilot Careers Live events year-on-year is evidence that it’s not yet the case, with many men and women attending these shows to find out more about their dream career.

High levels of attendees to Pilot Careers Live events, year after year, indicates that interest in the career is enduring, despite challenges to entrants to the profession

Wendy warns anyone against getting too carried away with the news of a pilot shortage, writing in an article for The Log, BALPA’s membership magazine: “The real ‘shortage’ is a dearth of ready trained, experienced and specific Airbus/Boeing Pilots and nothing more.”

She adds, “Unless a cadet commences his or her training on an airline’s integrated programme they are likely to enter the unemployed pilot pool and wait and wait.”

This is a reality for more than 500 unemployed pilots within BALPA’s membership, with qualifying pilots each year adding to this pilot pool. According to the pilots’ association, these pilots tend to have around 195 hours of actual and simulator flying. Such levels of unemployment add another layer of caution for those hoping to enter the career.

“Supply and demand curves simply don’t match; it’s ‘crunch time’ and actions need to be taken urgently to improve the appeal, affordability and access to the career”

The tide is slowly turning – British Airways, JetBlue, easyJet, Virgin Atlantic, Flybe and many other airlines have announced full- and part-sponsored opportunities in recent years. While these places are admittedly limited and highly competitive, it’s evidence that airlines are beginning to take responsibility for the training of their future pilots. Also, airline training management, in partnership with the pilot training industry, is waking-up to the need to address the issue, and it’s a key topic set to be addressed at the Royal AeroSociety’s International Flight Training Conference 2016, taking place in late September.

As BALPA explains, it’s not simply a matter of encouraging more people to become pilots; it’s the culture that needs to be changed. “The past five years have seen a significant reduction in the number of new, well-selected airline pilot training enrollees globally against a backdrop of an escalating demand for pilots from both expanding and new entrant airlines. Supply and demand curves simply don’t match; it’s ‘crunch time’ and actions need to be taken urgently to improve the appeal, affordability and access to the career of professional flying.”

So who would become a pilot?

Even with all the challenges that face entrants into the profession and with a pay-to-fly-culture that’s in dire need of a change, for many people, a pilot career is more than an occupation; it’s a dream.

As pilot Mark Vanhoenacker says, writing for Slate, “As someone who always dreamed of flying but delayed the decision for most of my twenties… I’d like to put a call out to anyone, young or not-so-young, who’s ever wondered about turning left instead of right when boarding an airliner. Consider becoming a pilot. Seriously. It’s a great job.

“The pilot’s career path isn’t always straightforward and the work is certainly challenging. But the job still amazes me in all the ways I hoped it might as a kid”

“The pilot’s career path isn’t always straightforward or easy these days, and the work is certainly challenging. But the job still amazes me in all the ways I hoped it might as a kid, and there are plenty of more practical advantages that aren’t appreciated outside the profession. Today, after 15 years of flying, I’m one of the few people I know who would happily keep working if I won the lottery. (OK, maybe part-time.)”

How do I become a commercial airline pilot? 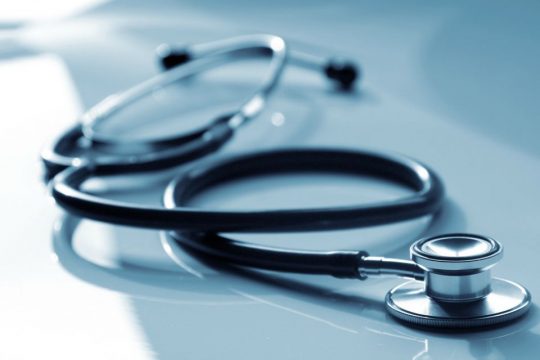 What to expect from your pilot medical

If you’re considering a career as a commercial pilot, the first thing you must do is obtain a Class 1 medical certificate. Make it the first step yo... 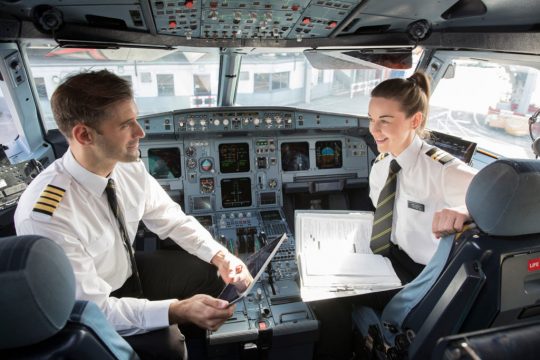 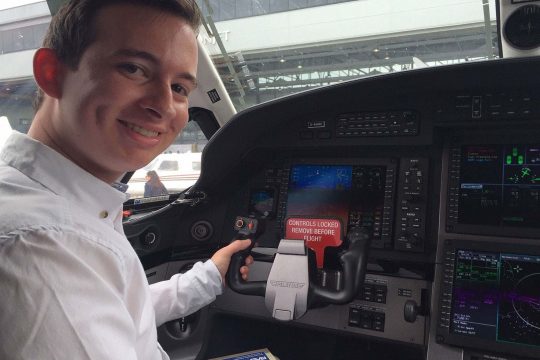 Becoming a commercial pilot without a sack of money

Dan Binstead’s interest in flight training started in an unusual place – a car boot sale. There he stumbled across a copy of Flight Sim, a ...