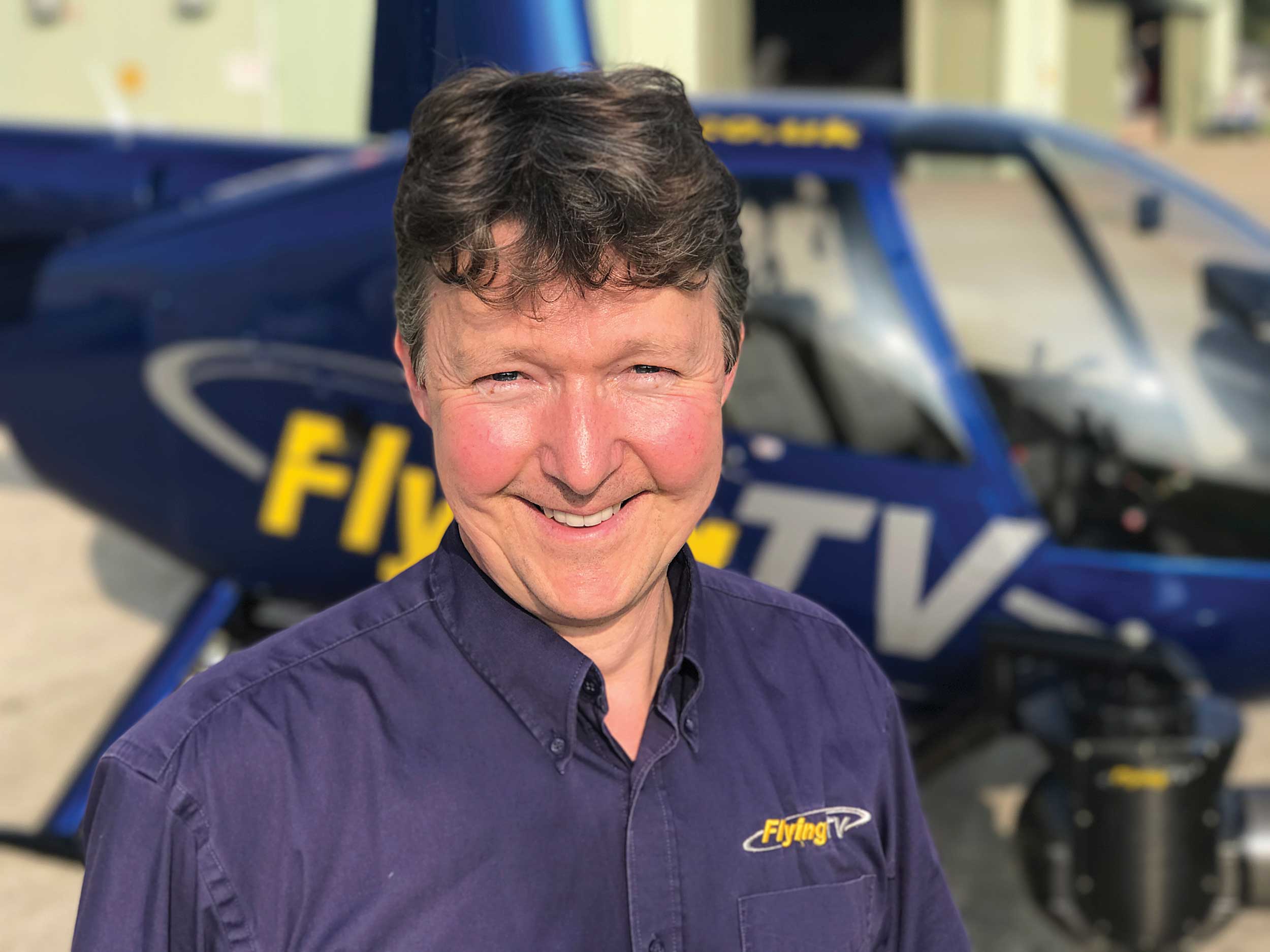 Piers Lawrance is a pilot involved with the technical and creative aspects of shooting high-quality visual footage from a Robinson R44 helicopter.

How did you get into flying?
At school I was in the Air Cadets, which was fantastic. We did lots of Air Experiences and that’s how I got the bug, in the back of a Puma, Lynx or Chinook. Aged 13, I really wanted to fly helicopters. Next to my passion for aviation, I was also interested in TV – now, I’m lucky enough to combine both for a living.

Tell us about your job…
I’m a filming pilot for FlyingTV, in a Robinson R44. Every day is different – we can be filming vehicles and trains, shooting air-to-air, or covering landmarks, landscapes and coastlines.

After receiving a brief from the client, we plan the flight, checking route, altitude, weather, Notams and liaise with ATC, prepare the aircraft and configure the camera systems. I fly the helicopter, but aerial filming is very much a team effort. There’s a camera operator in the back who’s responsible for composing the shot. However, she can’t get the right shot unless the heli is in the right place. It’s a proper partnership, which I like.

I also love the flying, which isn’t standard A-to-B, and can be quite challenging. You have to possess a feel for the R44 and be completely aware of its performance. As you’re using the helicopter to its full capabilities, you need good flying skills. My preference is air-to-air, as when flying alongside another aircraft you can take really dynamic shots.

On a recent air ambulance shoot, we flew above, and shot down through its rotor disks, which made for very artistic pictures. When you get the camera in the right place and the operator frames the best shot, together you can create amazing images. Getting involved in both the technical and the creative aspect is what makes my job so fulfilling.

Everyone wants to get good footage, but safety is paramount. Especially with air-to-air filming, you need to cross every ‘t’ and dot every ‘i’. You’re flying close, but not in standard formation as you’re moving around the aircraft, showing it off to its best advantage. Every single move needs to be clearly discussed beforehand – there can be no ambiguity at all. In my job, you can’t cut corners.

What training did you have?
I used to be a charter pilot and a flight instructor, which gave me an understanding of aircraft and their capabilities. There’s no specific training for aerial filming – usually you just do some small jobs to get a feel for it.

My experience in the film and TV industry has been a very big help. As I was already comfortable with filming and knew what makes a shot look good, so I immediately understood what we’re trying to achieve.

What’s been your most memorable flight?
Air-to-air filming the maiden flight of the Airlander 10 airship from Cardington Airfield, Bedfordshire, in August 2016. To see that colossal aircraft moving so gracefully through the sky at dusk was just fantastic. In order to understand how restricted the pilot’s vision was, we had a go in the airship’s simulator beforehand.

I’m an aviation enthusiast, so getting a closer look at the airship and its handling was very exciting.

And your favourite airfield?
Wycombe Air Park is really close to my heart as it’s where I did my flight training, and I’ve worked there. But I also love Denham Aerodrome, where FlyingTV is based, because of its friendly atmosphere and there’s always something different going on.

Do you get to fly much outside work?
Not as much as I used to, but I occasionally take my family up for a flight over London. They also love flying – my youngest daughter wants to become a pilot. Every time I fly over London, I notice something new – it’s a beautiful city, especially at night.

Not many people know that you’re allowed to fly a helicopter down the Thames. Even private pilots can do this – it’s an amazing opportunity, to see sights like Big Ben and St Paul’s Cathedral.

What’s the most valuable career advice you’ve received?
Never turn down an opportunity. If you’re given a chance to do something, go for it, even if you’re unsure. That person believes you can do it, and so should you. I’ve been given all sorts of opportunities, and have always grabbed them with both hands. They won’t ask you twice, so just give it your best shot and see what happens.

Piers Lawrance has been a pilot for FlyingTV working on the likes of the BBC TV drama series, Silent Witness, and Ed Sheeran’s promotional video for his Castle on the Hill single.