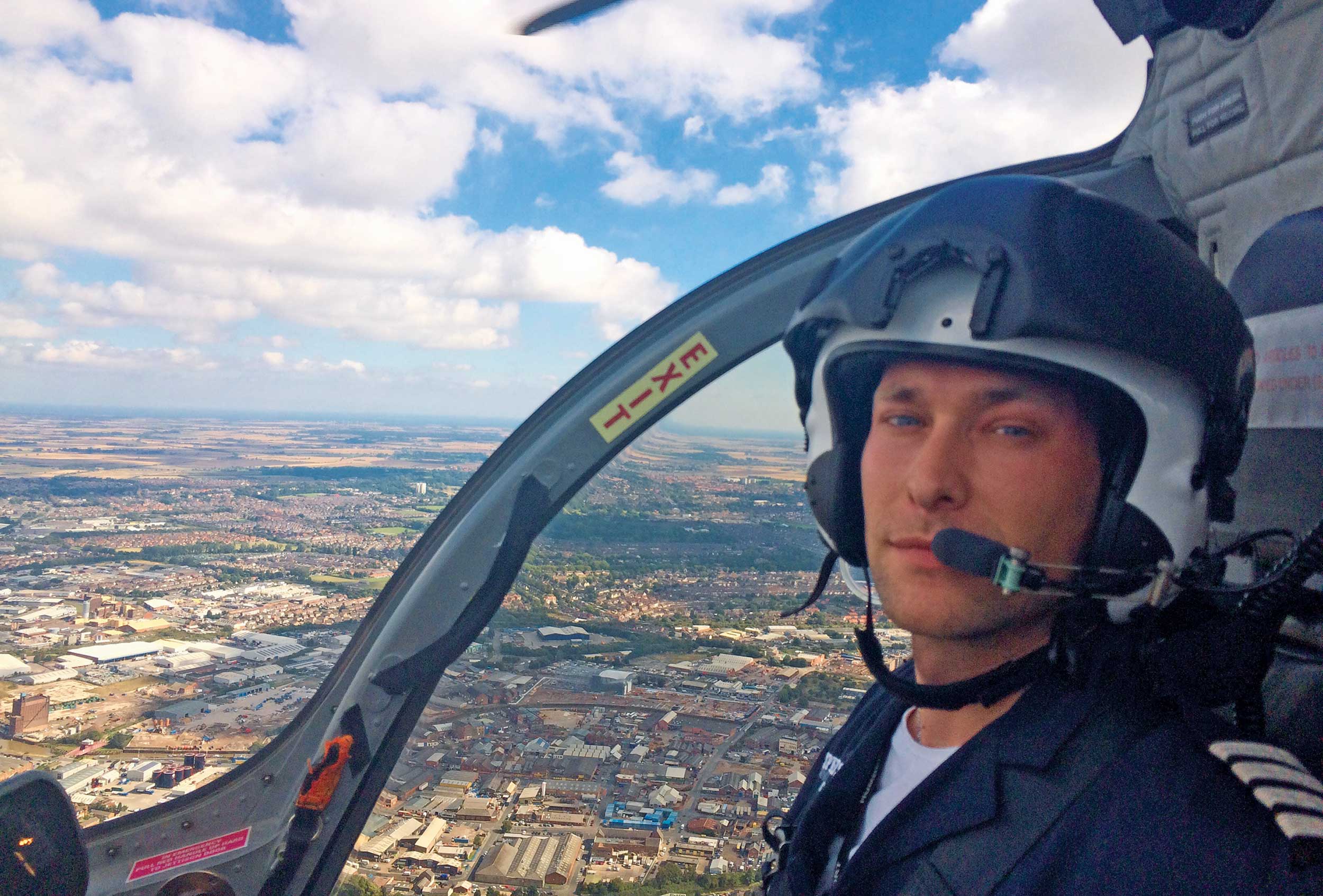 A co-pilot for the Lincs & Notts Air Ambulance, responsible for delivering doctors and paramedics to medical emergencies as quickly as possible…
Interview by Yayeri van Baarsen

How did you get into flying?
It all started with watching the film Deadly Encounter when I was 10. From that moment, I knew that I wanted to become a helicopter pilot and I got into building model aeroplanes. I didn’t want to go the military route, so I obtained my CPL and went the commercial way.

Tell us about your job…
I’m a co-pilot at the Lincs & Notts Air Ambulance, a registered charity which provides a Helicopter Emergency Medical Service to the people of Lincolnshire and Nottinghamshire.

Every shift starts with checking the aircraft, Notams and weather. After that, it’s waiting for the red ‘bat phone’ to ring. When it does, we aim to be airborne in under four minutes.

On average, we’re called out to three potentially life-threatening incidents every day, varying from road traffic collisions and medical emergencies to sporting accidents. Sometimes you’re landing in the middle of a city, others in a 300-foot-deep quarry, helping a paintballer who’s fallen in.

On busy days we bounce onto another job, otherwise we head back to base to debrief. Air Ambulance used to be ‘swoop and scoop’, now it’s more about getting our medical crew to the scene as quickly as possible. The medical crew has an extended skill set and can deliver roadside A&E care.

With our ‘Ambucopter’ we can get them to any incident in our area in under 15 minutes, also at night. Generally the flying is low-level, sometimes in poor weather, but since we’re an emergency service, we need to operate close to the limits.

When we’re on our Alpha call sign, it’s like we have blue lights and sirens. ATC clears the airspace, allowing us to fly flat-out at almost 200mph. With three hours’ endurance, our new AgustaWestland 169 is one of the most advanced helicopters currently flying in Europe.

The best bit of my job, though, is helping others. Sometimes it’s a love-hate thing – it’s great to go flying but awful that someone needs the Air Ambulance. Being able to help people bridges this gap.

Lincolnshire is quite a rural county, so we’re often first on scene. Our pilots are medically trained to a basic standard so when needed, we can assist. However, we take care not to get too involved. It’s very important to show compassion but even more so to stay professional. Whatever the accident, you have to remember that it’s your job to fly the aircraft.

What training did you have?
There’s no specialised training to become an Air Ambulance pilot, but you need to have some very specific experience to even be considered – a minimum of 1,500 hours and lots of of low-level flying in poor weather, which I gained while utility flying in Scotland. My previous job, as a police pilot, was also good preparation.

I’ve had emergency flying and elevated heli-deck training, as you’re landing in places where people wouldn’t normally do so. Apart from the flying skills, it’s also extremely important to click with your unit as you’re together 12 hours a day, working in life-or-death situations.

What’s been your most memorable flight?
The first day of our new Ambucopter, 15 June 2017. At 0955, we’d just finished our checks when our Chief Pilot, Paul Smith, asked if everyone was happy. Literally forty seconds later, the bat phone rang. We did four missions that day without missing a beat – I don’t think we even came back to base in-between. With excellent weather, good jobs and the aircraft performing faultlessly, these flights were very rewarding.

And your favourite airfield?
Nottingham City – we use it a lot and it’s my favourite because of the people, who are really nice. It’s always the people who make a place. The guys and girls there fund raise for us. Also, they make great coffee!

Do you get to fly much outside work?
No, I do four 12-hours shifts in a row, so by the end of it I’m pretty tired and don’t really want to go up again. Also, because of the CAA Flight Time Limitations I can’t fly outside of the unit commercially.

What’s the most valuable career advice you’ve received?
To treat everybody in the industry with respect, as you never know who you might end up working with or for. My friend and mentor, Geoff Day, an ex-RAF pilot and one of Europe’s most experienced heli pilots, once told me that. And it’s true, aviation is a small world.