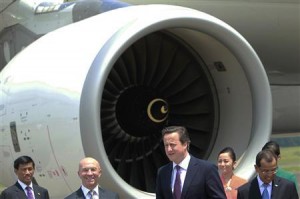 The aircraft, to be powered by Rolls-Royce Trent 700 engines, are expected to be delivered between 2013 and 2017.

The carrier will operate the aircraft in a two-class configuration on services from Jakarta and Denpasar to destinations in Asia, the Middle East and the Pacific, says Airbus.

The purchase of the A330 jets, worth about $2.5 billion and powered by UK supplied Rolls-Royce (RR.L) engines, reflects the growing consumer demand that is attracting political leaders and financiers to court Southeast Asia’s largest economy. British Prime Minister David Cameron was present at the signing ceremony.