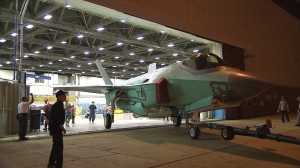 The first F-35 Lightning II for The Netherlands rolled out of the F-35 production facility on April 1.

This is the latest step in the production process leading to its eventual assignment to Eglin AFB, Fla., later this summer. The Netherlands will use the conventional takeoff and landing (CTOL) jet, known as AN-1, for training and operational tests for pilots and maintainers. AN-1 will undergo functional fuel system checks before being transported to the flight line for ground and flight tests in the coming weeks.