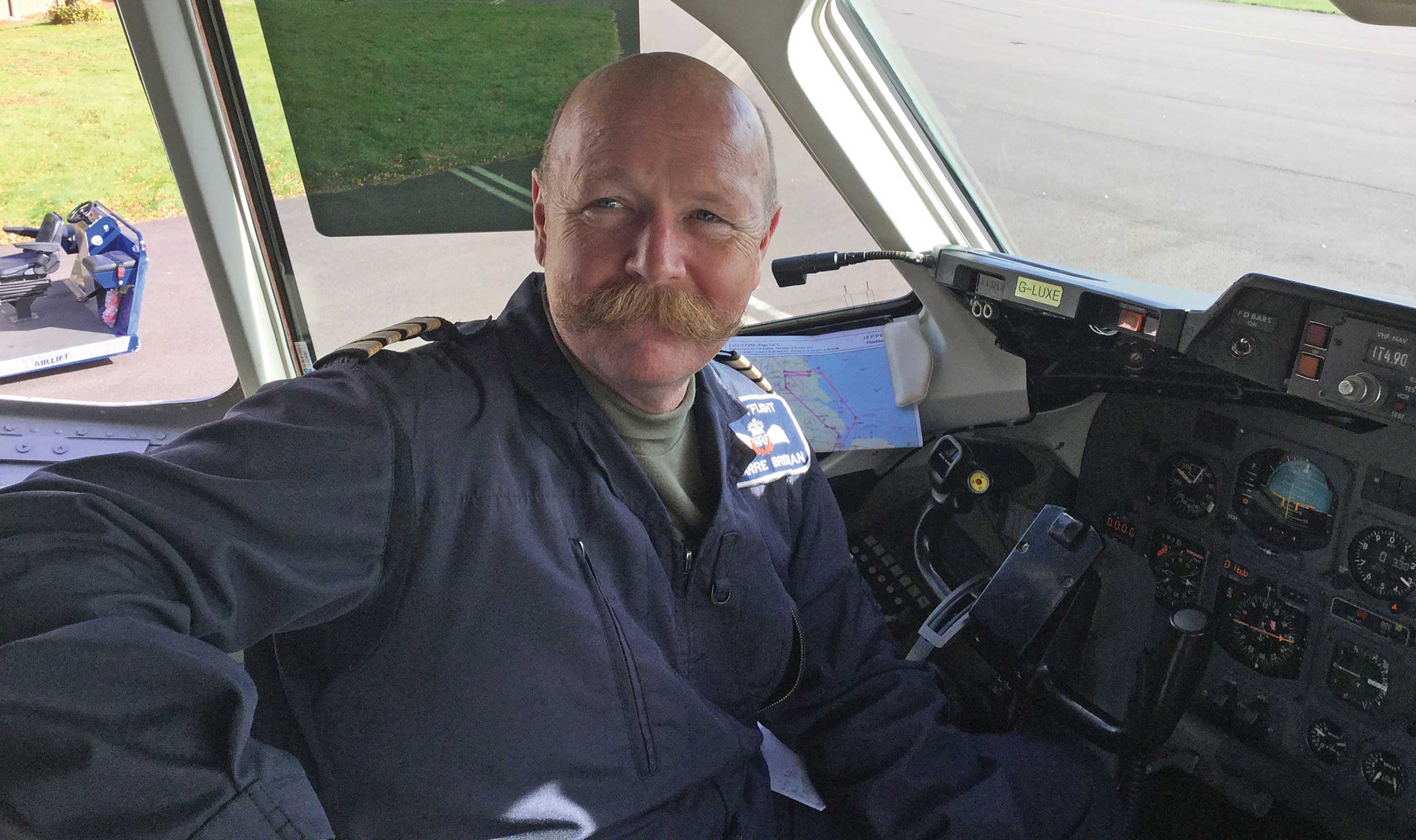 An atmospheric research pilot who gets to fly a BAe 146-300 over Iceland’s volcanos, Greenland’s glaciers and the west Pacific.

Wanting to fly was one of those bizarre childhood dreams that I never really grew out of. I joined 303 Worksop Squadron of the Air Training Corps aged 13 and left at 18, to join the RAF. The Air Force has been a great catalyst in realising my childhood ambitions.

I’m an atmospheric research pilot for the Airtask Group, which is based in Cranfield. As part of the Facility for Airborne Atmospheric Measurements (FAAM) team, I fly the BAe 146-300, the UK’s primary atmospheric research vehicle, which can carry four tonnes of science kit and up to 18 science crew members. It’s a real ‘plug and play’ aircraft and is reconfigured for every campaign.

What I love about my job is the variety. One day you’re off to Alaska, while the next project is in the western Pacific. My prior campaigns include measuring the radiative effects of biomass burning upon climate and weather in the central and south Atlantic, and measuring the in- and output of solar radiation while studying the reflectivity from Greenland’s ice-caps. I’ve just come back from a seismic emissions survey in Iceland.

The flying is very enjoyable and ranges from 100ft above the ocean to measuring high-level radiation at 30,000ft.

Cutting-edge research is undertaken in the back of the aeroplane. I like reading up about that as an understanding of what the scientists are trying to achieve helps with placing the aircraft in a better position.

Flexibility is very important in my work. Obtaining all of the necessary clearances can take weeks, and when everything’s organised, sometimes the phenomena you want to research has moved and you have to start planning all over again.

There’s always a certain amount of creative tension between the pilots, who want every single flight detail pre-planned on paper, and the scientists, who understandably like complete flexibility.

They’re very focused on the scientific requirements, and some may not fully appreciate the aviation-related technical or procedural limitations, so it’s our job to marry the two together – achieving the science while staying safe and legal. For example, when measuring the air quality around London you can’t fly through Heathrow’s approach path at 1,000ft…

I trained in the RAF, which gave me experience in flying large aircraft, like the Nimrod, at low-level. There’s no special course for becoming an atmospheric research pilot, but all four of Airtask’s
are low-level-qualified.

The RAF also taught me formation flying, which comes in handy in my current job – for example, with wingtip measurements that we did with NASA and the DLR.

During my previous career, at CityJet, I gained experience in dealing with passengers as part of a large team of mainly non-pilots.

What was your favourite flight?

Flying from Summit Camp on Greenland’s ice shelf down to the coast, in 2015. We flew low-level down the glacier, which was like flying through a geography textbook – great views from the cockpit. NASA’s ER2 (U2) was up 60,000ft on the same secondary mission, to calibrate Earth observation instruments on a satellite following the same track.

It was a bit weird flying over the ocean at 100ft, in shirtsleeves, talking to the NASA ER2 pilot who’s wearing a spacesuit.

RAF Woodvale, on the coast, north of Liverpool. It’s a tiny place with a few shabby huts and around 12 aircraft. During my time at Lancaster University, I spent every weekend and holiday flying a Bulldog there.

Yes, I regularly fly Air Cadets in a Grob Tutor for Number 3 Air Experience Flight. It’s great to be able to give something back and I love making a little aeroplane stall, spin, and fly upside down as it reminds you of what flying is really about. Air Experience Flight is how I got in touch with aviation, many years ago, in a Chipmunk, so I’ve gone full circle.

Not to listen to it! A career advisor once told me not to bother trying to join the RAF as there were already too many applicants – I’m glad I paid him no attention. If you’ve an idea of what you want to do, just go for it. That way, you’ll never have any regrets or ‘what ifs’.

CityJet Captain shares her advice with pilots of the future

As Irish airline CityJet announces it will welcome ten new cadets to its Integrated Training Programme in 2016, we spoke to Captain Sheena Anderson, w...