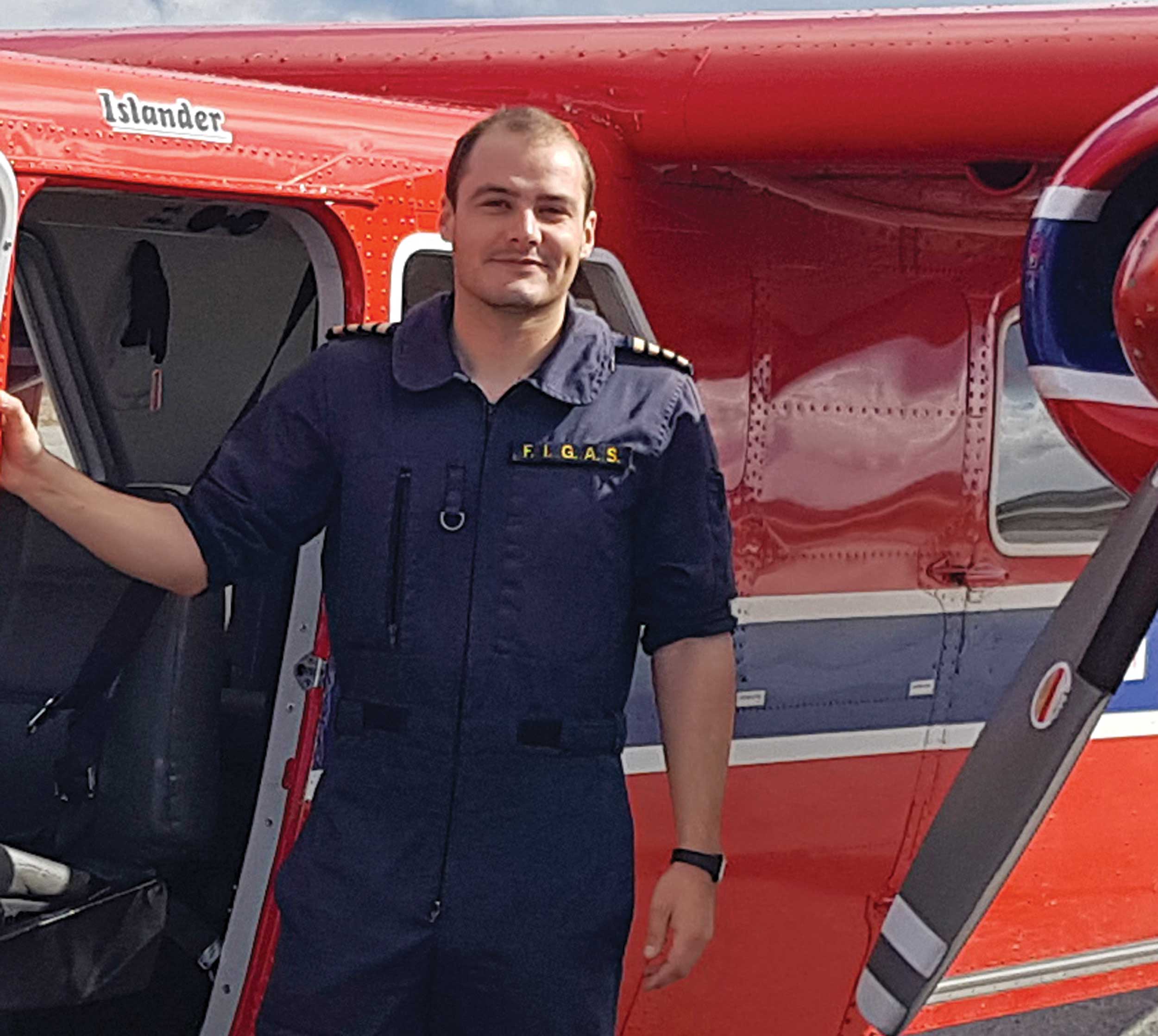 This article first appeared in FLYER in May 2019

Island-hopping in an Islander: Falklands pilot Drew Robertson transports everything from pigs to washing machines to remote communities

My first flight as a passenger happened when I was just a few days old, from the hospital in Stanley where I was born, to the remote farm where we live. On the Falkland Islands, everything is supplied by aeroplane.

Also, flying runs in the family. My parents and brother are pilots as well. Ever since my dad flew us kids around in his Cessna 172, I thought it’d be cool to fly for a living.

I’m a pilot for the Falkland Islands Government Air Service (FIGAS), which is based at Port Stanley Airport. Our fleet consists of five Britten-Norman Islanders, one of which is a dedicated Maritime Patrol aircraft.

The main reason I love my job is the variety. One day it’s seat-of-your-pants flying, the next you’re doing precision approaches.

Since our territorial waters extend 200 miles offshore, we regularly conduct fishery zone surveillance patrols and look out for ships in trouble or oil spills.

We also do survey flying, taking scientists up to observe dolphins, whales and penguins. Penguins don’t look that spectacular when seen from an aircraft, but whales make for a really impressive sight, especially during migration season when there are thousands.

We’re primarily an air taxi service for passengers and freight. In the summer it’s mainly taking tourists on scenic flights and bringing them to their island accommodation.

Outside the main season, we deliver goods to people living on farms on the outer islands. From washing machines and building materials to fresh fruit and mail. As long as it fits in the aeroplane, we’ll carry it.

The Islanders are very versatile. We take out the seats and replace them with stretchers for medivacs, or cages when transporting animals. Over the years, we’ve flown everything from reindeer to pigs and penguins.

We fly to 32 destinations on the Falklands. Port Stanley Airport and RAF Mount Pleasant have a paved runway, all other airfields are either grass, clay or beach.

The weather here isn’t as bad as people think, but it’s generally quite windy and often a fair amount of fog, so you get good at flying in wind and low visibility. Some islands are almost inaccessible by boat, so they rely on aircraft for everything.

In 2011, I went to the UK where I obtained my CPL at CAE Oxford. Coming back home, the real training started. I flew with a local pilot for nine months to gain experience.

Since FIGAS is subsidised, there’s no pressure to get new pilots flying by themselves as soon as possible. Instead, you go when you’re ready – I had my licence and 150 hours, but they didn’t let me loose on my own until I had 500.

With senior pilots passing on all their knowledge, the on-the-job training here is excellent. I feel very lucky; I wouldn’t be the pilot I am now if I’d trained anywhere else.

That’s impossible to say; there have been so many memorable ones. I particularly love flying on nice calm, cool winter days when there’s snow on the ground and you can enjoy the views.

Port Stephens. It’s my home, so I get to see my family and have the opportunity to get my nephew into aviation as well!

New Island and Westpoint Island are also nice. Located on the far west of the Falklands, these two airfields have a fairly short landing strip near cliffs, so the approach can be a bit of a challenge.

Unfortunately not, as the Falklands is very unfriendly to private aviation.

My dad did own a small aircraft, but it became too complicated to maintain. Up until recently I’ve flown a friend’s Cessna 172, but that aeroplane is now grounded due to mechanical problems.

What would be fairly easily fixed anywhere else, becomes a real issue when you’re thousands of miles away from everywhere.

Do what makes you happy – and do it as well as you can.