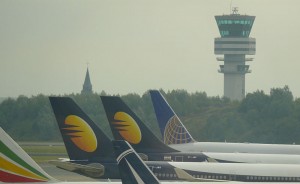 Brussels airport is preparing to introduce continuous-descent approaches into its standard procedure after trials indicated promising fuel savings from the technique.

Belgian airspace is a crossing point between major European hubs and shared by four military bases. In this context it is not easy to conduct optimal landings which is why airplanes need to approach the airport in steps. In such a stair-step approach, pilots constantly need to increase and decrease the thrust of the aircraft engines.

In the autumn of 2010, Belgocontrol, Brussels Airlines and Brussels Airport formed a consortium (‘B3’) that was faced with the challenge of developing and testing a procedure that increases the number of green approaches. A green approach, called a ‘Continuous Descent Operation’ (CDO), means that an approaching aircraft descends according to a continuous vertical profile. In doing so, the airplane operates with reduced engine power.The B3 test phase took place between 1 January and 30 October 2011, with Brussels Airlines, Thomas Cook Airlines, Jetairfly, DHL and Singapore Airlines Cargo all participating.

A thorough analysis of these tests has shown that the impact of these green landings on fuel consumption and CO2 emissions of aircraft that participated in the test is significant. If today 9% of all aircraft approaches on Brussels Airport would be performed using a Continuous Descent Operation pattern, this would lead to a CO2 decrease of at least 1,700 tons and a fuel economy of 550 tons. The consortium confirmed, “Now that the test phase has been successfully completed, the next step is to incorporate this ‘green’ landing technique in the official procedures.”