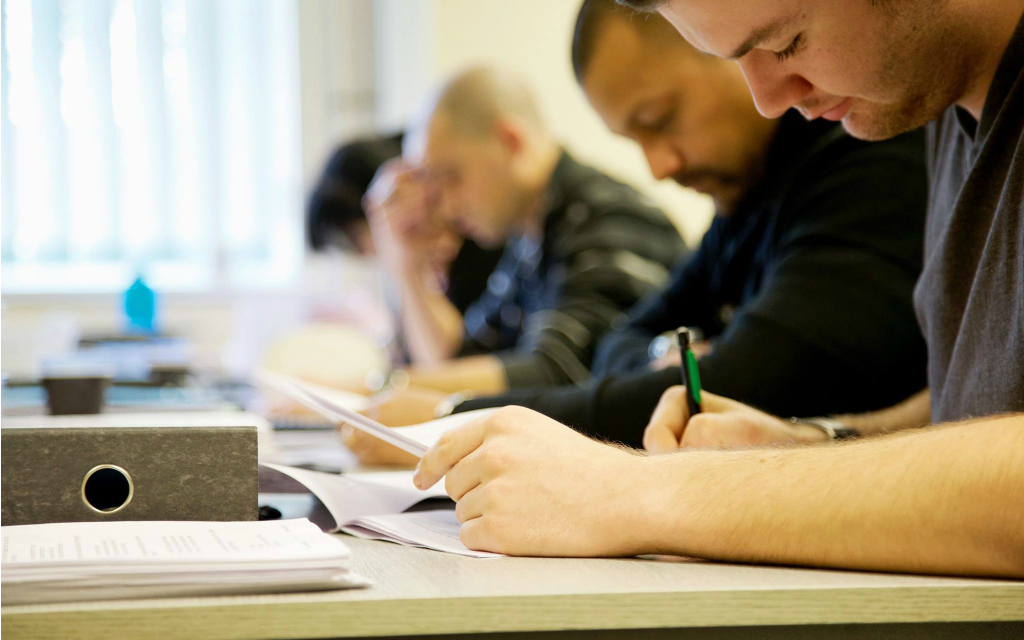 Bristol Ground School is one of the leading UK training organisations and has written this article for anyone training or wanting to start training as a professional pilot, and the effects of the Covid-19 (Coronoavirus) pandemic.

Like many countries, the UK is currently on Government mandated ‘lockdown’, with only essential activity and travel permitted. This means that BGS is unable to offer revision courses or exams for the foreseeable future.

BGS is in discussion with the exam authorities about the possibility of conducting examinations in different ways to suit the circumstances and we are developing remote instruction methods to help our students continue with distant learning.  However, while there is no way of sitting examinations, we do not intend to attempt to conduct distant revision courses, as students value these courses shortly before sitting their examinations.

The UK CAA have announced a partial easing of the rule that requires candidates to complete all their examinations within an 18-month period starting on the date of their first, and Austro Control have announced an automatic extension of the period to 21 months. Both have promised to review the regulations as the crisis unfolds.

Our students are in flight training at a wide range of institutions across Europe. Many have ceased training too, others are continuing in a limited fashion but as the crisis deepens, opportunities to fly are becoming more limited.

Clearly the Covid-19 crisis is going to have a major and long-lasting impact on the airline industry.  While the exact nature of the effects is speculative, it is likely that ATOs and airlines who are highly geared and/or do not have either cash reserves or access to finance will cease operations. In the case of airlines, some might benefit from state support.

All this has an immediate effect on commercial pilot employment. While this may prove to be the biggest shock to the industry in living memory, it is not the first, so those who have been around for a while know what to expect.  The implications for trainee pilots depend their stage of training.

Undoubtedly, employers will be talking with their staff about reduced working. Generally, airlines don’t like to lose pilots in a recession and will offer either part-remunerated or unpaid furlough or sabbaticals. This can be financially challenging, but at least there is a job to go back to if the employer weathers the storm.

The more hours a pilot has, the more employable they are. With a type rating under their belt, especially with a few hundred hours, a pilot is in a fundamentally different category to new graduates from flight schools.

Even if their employer does not survive, pilots will be sought after when the crisis is over, and the airlines start ramping up again. And ramp up they will. While they will have eaten into their cash reserves and/or used up available credit, airlines will be keen to grab the more profitable routes vacated by competitors who do not make it through the recession.

In the middle of the crisis, especially if a pilot loses their job, it might seem as if the bottom has dropped out of the world. However, a few years later the crisis will be a blip on a graph. The blue line below shows passenger miles flown since 1945, both 9/11 and the 2008 recession only show as a short pause in the continuing growth. 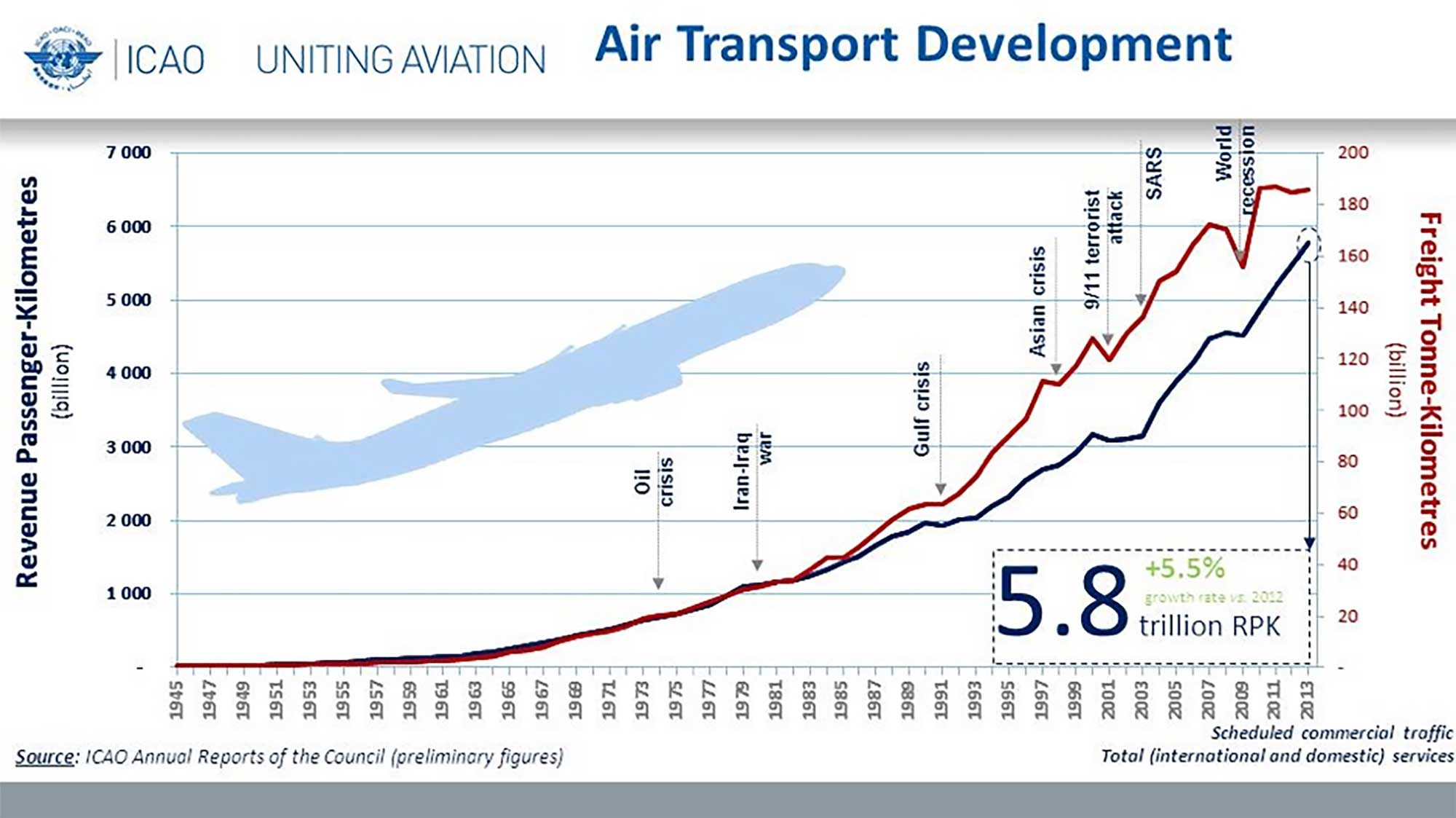 Those who have graduated from pilot training and are waiting to start are hardest hit. Recruitment has ceased and it is quite possible that any job offers received before the crisis hit fully will not be honoured.

It would not be realistic to expect any significant movement in the recruitment market for many months, perhaps not until the end of 2021.

However, it will not last for ever. There will eventually be jobs available again. The focus of pilots in this category should be on remaining current and motivated. When airlines start looking for pilots again, they will be competing with experienced pilots as well as other low-hour pilots who have graduated in the meantime.

The experienced pilots are likely to be the most competitive recruits. When the employers get around to looking at flight school graduates, to have a chance of success, applicants need to be competitive. It is important to try and maintain flying currency; both in simulators and aircraft.

Recruiters love determination and grit. Pilots in this situation are going to have the opportunity to demonstrate their commitment to this career!

As well as flying, it’s important to network and seek and give mutual support. Motivation is key and need not come entirely from within.

Depending on their stage of training, trainee pilots are in a less perilous position. Their graduation is quite likely to be delayed as the training industry and examiners may be unable to offer the service needed to progress, but in employment terms that may be no bad thing.

It is going to be very hard to predict when the job market will pick up again. If this crisis is comparable to the 2008 recession history suggests it will be around two years.

The decisions facing trainee pilots are whether to call a temporary halt on their training or whether to reschedule it to delay graduation. There are several factors informing those decisions:

In an ideal world, pilots will want to keep flying current and progress at a gentler pace, aiming to graduate shortly after the job market improves.

Pilots who have not done their CPL/MEIR and/or APS-MCC and intend to do the former full-time, could consider delaying their training.

Another option might be to do a part-time CPL/MEIR. Normally we do not advise that, as it can drag on for a long time and/or require increased training. However, in these circumstances that might be desirable and would serve to keep the pilot current while delaying graduation.

Those on integrated courses do not have this sort of flexibility. In the last recession, many in these circumstances switch to a modular path to give them more control over their own destiny.

Perversely, this might be a good time to start training. In the last major recession, many people who had been considering a career change for a while found themselves unemployed and seized the opportunity to train, graduating just as the job market picked up.

The strategy paid off for many. The trick is in the timing, and right now we have no real idea of when the job market is likely to pick up again.

Our best guess is that it will be a while, so it might be best not to rush through training and end up as another unemployed graduate, rather for new starters to take their time and commit to full-time CPL/MEIR, then APS-MCC only when there are signs of recruitment again. Those two courses generally take 4-6 months.

In boom times there may be substantial waiting lists for CPL/MEIR courses, especially at the better schools, but those are likely to fall off in the coming months, so a pilot might be able to pick their moment.

If you are considering starting commercial pilot training, why not check out our sister company, Wings Alliance, who are a not-for-profit organisation dedicated to helping prospective pilots achieve their goals.