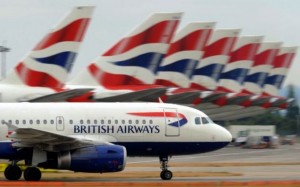 The UK office of Fair Trading has imposed a £58.5 million ($93.8 million) penalty against British Airways in relation to anti-competitive practices in the pricing of passenger fuel surcharges between 2004-2006.

“The OFT has concluded that between August 2004 and January 2006, BA and VAA (Virgin Atlantic Airways) co-ordinated their surcharge pricing on long-haul flights to and from the UK through the exchange of pricing and other commercially sensitive information,” says the OFT in a statement.

“The decision brings the OFT’s investigation to a conclusion,” it adds.

Under the OFT’s leniency policy Virgin was not fined. The carrier had been granted immunity from penalties after it relayed details of the anti-competitive exchanges to the OFT.

Virgin to compete with BA on domestic routes

Heathrow University Technical College to open in next two years

A new state school with a focus on aviation engineering, backed by the owners of Heathrow, British Airways and Virgin Atlantic, is to open on the outs...

British Airways’ parent company has completed the purchase of Bmi from Lufthansa today but it will be at a reduced price. IAG, which also owns Iberi...